Hailing from Atlanta, GA, the masked menace DJ/producer duo known as ATLiens has unleashed a steady stream of dark, trance-inducing, bass-driven music – hurtling these young guns towards the top of the trap & bass music scene nation-wide and to countries far and wide. With support … Read More

Autograf have sustained a global fanbase with yearly headlining tours, bringing their dense and renowned discography of effervescent house music to the prestigious stages of Coachella, Lollapalooza, EDC Las Vegas and EDC Korea. The guys pride themselves in their all-encompassing approach to the project, which … Read More

Proving that opposable thumbs or a basic grasp of the human language are not necessary prerequisites for EDM domination, allow us to introduce to you Bear Grillz. He's certainly not your standard 28 year-old grizzly bear... Hailing from Yosemite national park, Grillz's story begins on a … Read More

Blurring the lines between electronic and hip-hop with latin influences, internationally-recognized producer act Boombox Cartel has risen the ranks as an unparalleled force in the world of dance music. Founded by Americo Garcia and writing partner, Jorge Medina, the project taps into their rich and … Read More

Justin Martin is a San Francisco-based house DJ and producer whose best tracks and remixes tend to be lean, finely melodic, and a little playful. He debuted with the 2003 single "The Sad Piano." Released on Ben Watt's Buzzin' Fly label, played by Derrick Carter and Pete Tong, and licensed … Read More

The Florida based bass music producer Midnight Tyrannosaurus has been making quite a quake in the underground dubstep community. Quickly gaining recognition and DJ support from big names like Excision, Figure, and Cookie Monsta. With multiple top charting Beatport releases on Chronos Records, I. Am. … Read More

Growing up in a log cabin in rural Vermont, Morgan Page began composing electronic-oriented music at the age of 12. By 15, his work appeared on local college radio and commercial stations in his hometown of Burlington and began to spread to other cities. Towards … Read More

WUKI is the genre-blending solo project of Denver-based producer Kris Barman. Influenced by the sounds of Detroit ghettotech and Chicago footwork scenes, Barman’s ability to seamlessly mix booty, breaks, electro, and house into hard-hitting club-shakers has become a trademark of the WUKI sound. The Mile … Read More

Talents such as Bruno’s usually manifest themselves very soon and only require the ideal environment to reach their full potential. Having it at home from an early age, he seized his assets to become one of the freshest new prodigies out of Brasil’s underground scenario … Read More

Fusing together over a decade of mastering his craft in the studio, along with an unmatched touring pedigree across some of the world’s leading clubbing brands, his fusion of deep textured sounds and driving percussion grooves have driven him to become one of the most … Read More

Since their debut release in 2013, Eli & Fur have been perfecting a sound built around infectious melodies with deep driving bass lines topped with their distinguished brooding vocals. Their sound has developed into something unique and has earned them respect from some of the … Read More

Some may know Marc Kinchen as an icon of the dance world, some may know him only by his initials, "MK", and then there are others who only know his music. This has been MK's experience ever since his breakthrough remix of the international classic … Read More 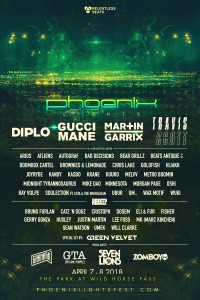