CRSSD Festival Back At It Again With Most Lit Lineup Yet

FNGRS CRSSD and Goldenvoice are back at it again for their semi-annual event, dance music fans will once again flock to the Waterfront for San Diego’s favorite, not your standard EDM affair, CRSSD Festival. I have had the privilege of attending this festival both during the Fall and Spring in the past; both times I was sincerely impressed with CRSSD Fest! 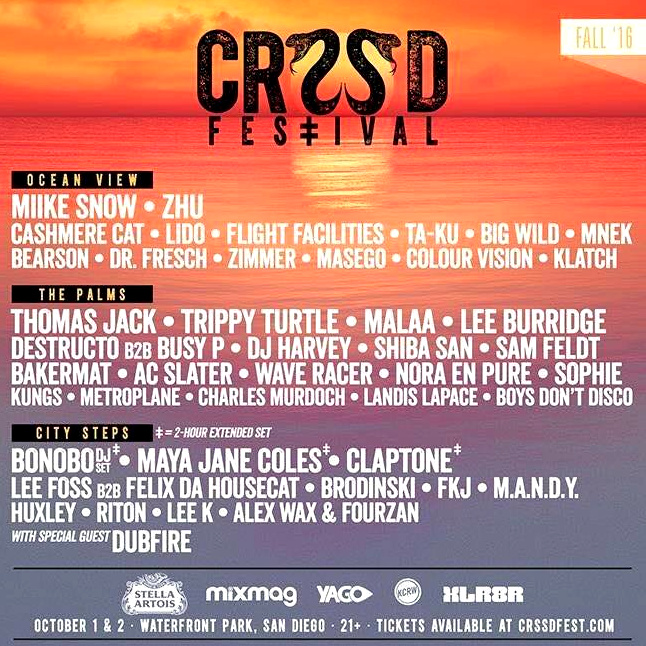 When it comes to CRSSD, this is most definitely not your typical dance music event. While it offers an eclectic lineup of artists, many with a more underground type of sound, the vibes of this beach-side festival are most definitely another huge plus. But really, how could the vibes not be perfect when you have the ocean right next to you as you’re grooving to some awesome house music by the beach in beautiful San Diego, CA at this expansive grassy and beautiful waterfront venue?

Being a basshead, there aren’t all the artists with that familiar bass-heavy sound that I’d usually flock to at my music festivals. This has been a blessing in disguise for me at CRSSD since it has allowed me to broaden my horizons and enjoy some musical acts that I wouldn’t usually have the opportunity or time to do so. Playing at the Ocean View stage, artists I am most excited for are Zhu and Cashmere Cat who are returning artists at CRSSD Festival, and of course Dr. Fresch who never puts on a bad show; he absolutely killed it at Phoenix Lights and went in on his set B2B SNBRN at the EDC 20th anniversary.

Playing at The Palms stage, it may just be easier to say who I’m not excited for, but I’ll point out a few extra special acts here: Landis Laplace who I was exposed to at Decadence AZ and fell in love, AC Slater and Wave Racer for some future house vibes, Sam Feldt and Thomas Jack for that tropical house, Destructo B2B Busy P which should be excellent, and MALAA who needs no explanation.

City Steps will offer a few extra special things, including some 2-hour extended sets from Claptone, Maya Jane Coles, and Bonobo who will be playing a DJ set. This stage will also host special guest Dubfire, as well as Lee Foss B2B Felix Da Housecat. While there are many familiar artists on this lineup, it’s those whom I’m not super familiar with that I am most excited to see. After all, that is how you find your new favorite artist – you gotta listen to it to feel it and love it!

This 21+ affair will be held October 1st and 2nd at the Waterfront Park in San Diego, California. Tickets will be going on sale Tuesday July 12th, at 12:00PM PST so don’t sleep on ticket sales since now you know; I’ll see all you beautiful people ocean-side on October 1st!