As performers and artists alike are trying to outdo themselves creatively and the industry they helped build, very few are going back to the roots in the umbrella-realm of EDM by not only revisiting, but reinventing certain aspects of the industry through modern means, yet still respecting what was historical. Industry insiders and heavyweights, Bad Boy Bill and Richard Vission, will be embarking on their “Back To Vinyl” Tour. Instead of using mechanisms and boards that would be familiar to any DJ post the year 2000, their tour which opened on July 8th in Cincinnati, Ohio, features an entirely vinyl-only setup to not only play their more famous hits, but feature new music as well. 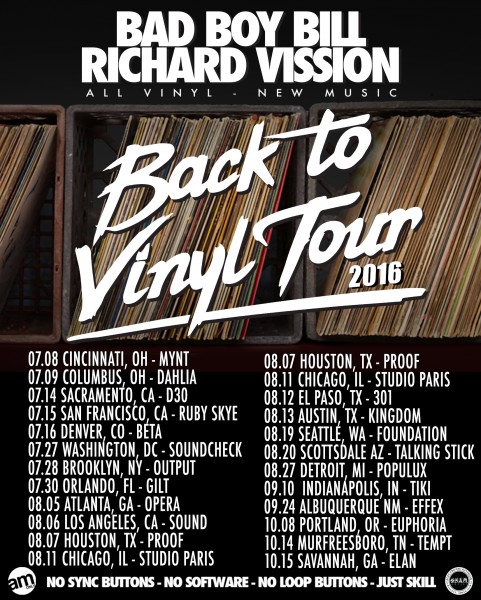 Bad Boy Bill and Richard Vission are no strangers behind the boards, but seeing them in an entirely old-school environment while still churning out new material on the set will prove to be an event you won’t want to miss when it comes around to Talking Stick Resort on August 20th, for two industry powerhouses to not only make a triumphant live return as a duo to Arizona, but also getting the rare chance to see a generation long past be revitalized — and we can say for a lot of our younger readers, it is a skill that you probably don’t see demonstrated every day in the year of 2016.

As we like to say countlessly in many of our articles, the growth of the EDM event and music industry has ballooned past anyone’s expectations. With the inclusion of Bad Boy Bill and Richard Vission performing in Scottsdale, you are bound to see a world that hasn’t been seen since your partying forefathers. To get a better taste of our friend, Richard Vission, check out his track he released three years ago with Luciana that has a strong ear to the radio as well as being able to fit into any modern club scene. What makes “PRIMITIVE!” a revolutionary track, is that Vission has apparently been way ahead of the game than some of his more mainstream counterparts. The creatively kitschy video stays true to his raw form of music that matches up great with Bad Boy Bill.

What to say about our friend Bad Boy Bill? Bad Boy Bill’s sound has a much more “dirty house” sound that combines older techno with some sick rap verses as heard on this hour-long mix from 2015. What you should expect from the combination between Richard Vission and Bad Boy Bill will take the old school sensibilities and hip hop influence that Bill possesses, with the cleaner sound that Vission produces which features more mainstream elements. Seeing these two heavyweights together will definitely bring the best of old and new, and while Bad Boy Bill will bring the techno-dirty side of house, Richard Vission will combine his own sensibilities to create a very captivating setlist.

Be sure to catch Bad Boy Bill and Richard Vission along with DJ Dan & Donald Glaude on August 20th at Talking Stick Resort, and get schwifty with some time warp action and vinyl-only sets.