The concert poster dawns two out-stretched forearms, their hands about to clasp in a handshake of unity. One displays the signature American colors of red, white, and blue underneath our stars and stripes; the other bears the flags of many countries, several of which were just told to stay out of the United States. Now, Zedd has helped orchestrate an all-star cast of musicians and producers to bring these two hands together, intertwine their fingers, and raise them to the sky. 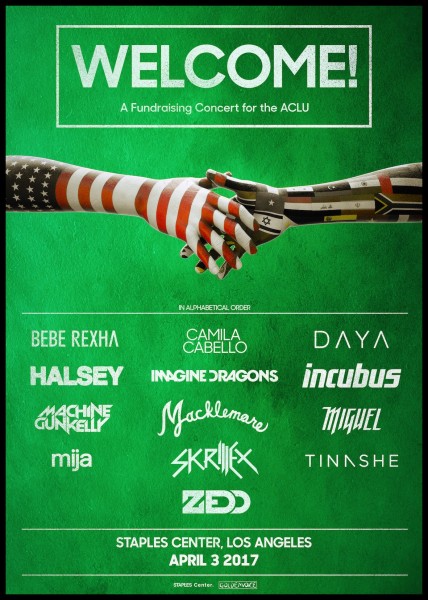 Following U.S. President Donald Trump’s Executive Action on travel and Immigration on January 27th, several activists, organizations, and celebrities, expressed their displeasure of the executive order and began calls for action. Zedd, with a platform to speak given his mass following of fans, joined others in speaking out against the U.S. closing its borders to several Muslim-majority nations and temporarily halting all Syrian refugees from entering the country. In a tweet, Anton Zaslavski (Zedd) stated that “as an immigrant myself I feel the need to stand up for what I believe is right.”

The American Civil Liberties Union (ACLU), a nonprofit and nonpartisan organization, is dedicated to protecting the constitutional rights of everyone in the United States of America. They immediately began to push back against President Trump’s executive action and quickly garnered the support of thousands around the country, including one Russian born, German raised music producer, Zedd. 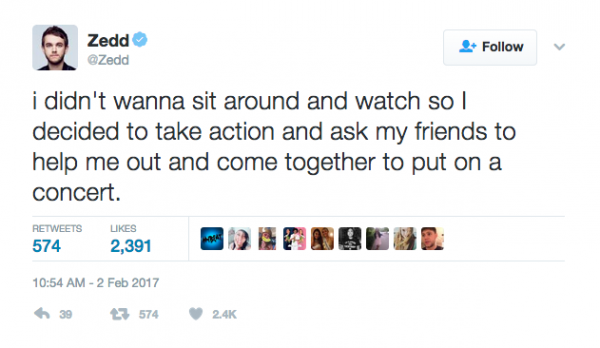 Immediately mobilizing his influential and talented friends in the music industry, Zedd quickly organized a fundraising concert benefitting the ACLU.  The final line up includes such performers as Bebe Rexha, Halsey, Daya, Incubus, Miguel, Mija, Skrillex, and more with Zedd rounding out the squad as the lead act. The concert will be April 3rd at the Staples Center in Los Angeles, California. More information and tickets can be found here.

Thump: Deadmau5, The Black Madonna, Eats Everything and Others Speak Out Against the Muslim Ban 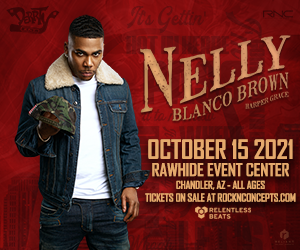