RB Exclusive Interview: Illenium – Big Things Are On The Way!

I’m sure nobody is surprised to hear that Illenium delivered a stunning performance at Middlelands. He was one of the last sets of the weekend and left a lasting impression on many. There’s been a lot of talk in the week since this inaugural festival took place and Illenium’s name comes up in many ‘best of’ lists. I had a chance to ask the incredibly talented producer a few questions about the festival and what’s to come. Stream the full Middlelands set here and check out the interview below!

2016 was a huge year for you with a debut album, touring, and everything in between. What are your big plans for the rest of 2017?

I’ll be releasing a new album sometime this summer that I’m super stoked for. It’s going to have a lot more recorded elements to it. Guitar, drums, some super chill moments. I did some experimenting and I’m excited to see people’s reactions. I’m also planning a fall tour that will be focused on the visual aspect of the music- using animation to bring the songs to life. I’m looking forward to bringing audiences into the “Illenium” universe.

Aside from the obvious addition of instruments what is the biggest difference between your DJ and live shows that you’ve noticed?

Musically I tend to play more dubstep and other people’s songs during my DJ sets. A lot of people are there to party and go hard so I’ll throw in more call/response stuff and other artist’s tracks to hype the crowd. For my live sets, I’m transitioning to playing more melodic and all original music. The fall tour should be 100% original.

What is your favorite non-EDM music to draw inspiration from or just enjoy?

Lately it’s been a lot of older Blink-182, Senses Fail, and Red Jumpsuit. Even though it’s not electronic I actually get a lot of inspiration from those groups. If you listen to the new album close enough you’ll hear parts where it comes through.

I recently saw you at Phoenix Lights, then Middlelands, and I know it doesn’t stop there as festival season is just getting started. Where are you most excited to play this summer?

It’s a hard choice. I think I’d have to say Electric Forest. I just love the vibe out there and playing in nature. It always makes me super stoked to play when I’m surrounded by such an amazing atmosphere. 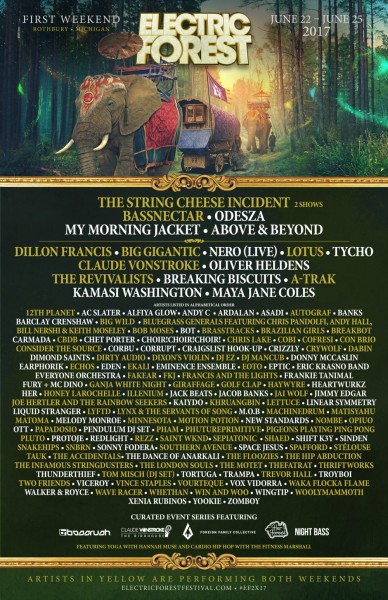 What was your favorite moment at Middlelands? How would you describe the festival as a whole?

Middlelands was crazy. The amount of support the crowd showed blew me away. I played some new stuff that went over well and just being able to connect with people during and after the performance was a humbling experience. It was awesome seeing all the costumes and epic stage design too. Definitely a “Renaissance Rave”.  It was also the first time I played mostly my own music in a festival setting which was amazing for me.  I’ve always wanted to do that and everyone’s response has me super stoked for the future.

We can’t wait to see what Illenium brings for the rest of 2017. Between a new album and plenty of shows full of fresh music, it should be a good one!