When the movie Go released in 1999, my eyes were opened to a world where parties were thrown in warehouses and a single DJ kept the party moving all night. The movie gave me this desire to find events with massive amounts of people dancing to one DJ spinning hi-energy beats. I jumped on my computer and turned on the dial-up (first made sure no one was on the phone) and did an internet search (Google wasn’t even a verb). The first event I found was Creamfields.

The inaugural Creamfields Festival was held in 1998 in Winchester, UK. 25,000 people attended the first event. Not a bad start at all right? Well, the list of incredible artists didn’t stop there and the accolades started coming. Artists who have played Creamfieldsinclude Tiesto, Calvin Harris, Avicii, Fatboy Slim, Above & Beyond, Swedish House Mafia, and Basement Jaxx. In 2000, Muzik Magazine named Creamfields “Event Of The Year,” while The Guardian gave it the “Best Event” award. In 2005, the House Music Awards named it the “Festival Event Of The Year” and then in 2010 it was awarded “Festival of the Year” over heavyweights Glastonbury Festival and the V Festival.

Any festival is only good as its current lineup though, right? Well, this year Creamfield’s lineup is no slouch. Just check out who is scheduled. 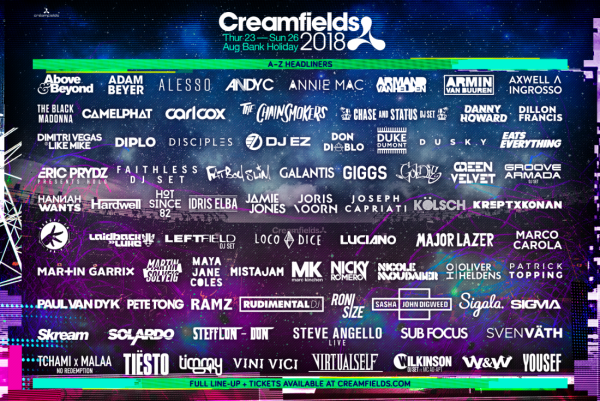 The variety is pretty dope, right. You got the old school with Left Field, Paul Van Dyk, Sasha & John Digweed, and Tiesto. And Creamfields has newer artists like Tchami and Malaa (doing a No Redemption set) and Green Velvet. Then you have festival slayers such as Dillon Francis, Major Lazer, and Martin Garrix to name a few. Personally, my eyes quickly went to Idris Elba. The British actor, who was last seen kicking tail in Thor: Ragnarok is serious when it comes to deejaying. A festival as diverse and awarded as Creamfields with that lineup is sure to be a damn jolly time.

You can check out more info about Creamfields here.