On the sweaty spring Saturday of the 2018 edition of Phoenix Lights. I had the pleasure of catching the eccentric yet affable duo known as Um.. (the dots are pronounced). While I looked into their sound beforehand, their unique blends of noise, chaos and a lack of reverence for the unstoppable “EDM machine” were even more pronounced in a live setting. In the last year, the duo comprised of Ben Bruce and Dylan Gold have been grinding out strange EPs, obscure remixes, and constantly upholding their “anti” sentiment. Fans of the mainstream may be slightly jarred by their blasé attitude, but their music tells a story of intense respect for the underground scene.

I was excited to sit down and discuss their music, but I couldn’t help digging a little deeper into how um.. managed to surpass all of the mainstream rules and become established with a sound of their own. 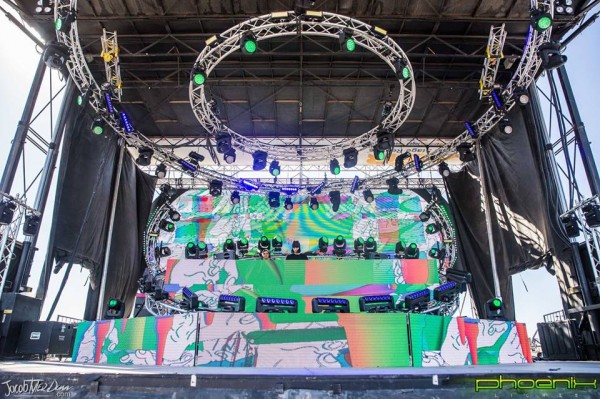 With the first question about how their set and relation to the crowd went, I immediately recognized their casually humble demeanor toward their brand; before giving an answer, Dylan and Ben hesitantly looked at each other with sly smiles and discussed how they relate to fans. The duo mentioned the great time they had but acknowledged that their music can take a little time to rub people the right way. Bleeding into my inquiry of their connection with the audience, Dylan explained that these big festivals are always a draw for large amounts of people who might connect with their work, but they also understand the initial hesitance they may have in an environment supported by progressive house, trap, and genres outside of theirs. With a heartfelt connection to the electronic underground myself, I couldn’t help but smile at their indomitable spirit in the face of adversity.

I also couldn’t help but be curious about their creative process and the reasoning behind their song names, samples, and cultural references. While most DJ producers go for clean images that retain an adherence to the major label status quo, much of um..’s mainstay revolves around obscure references, lowercase titles, and gritty self-made album art. As I explained my interpretation of their “F U” attitude toward the mainstream, Ben recognized my own personal appreciation and understanding of their image. I was told that most of their images and music are based around that brand of “DGAF” humor; it turns out that “this is our last song” clearly isn’t their last song, but was the last song they recorded for a session. In regards to “management made us do it,” the meaning behind that track actually contained little angst at all, and simply references humor from the Indie-popular sketch comedy group, Whitest Kids U’ Know.

The conversation progressed and when I asked how they would describe their music to someone, Dylan and Ben did not have an immediate answer. In past interviews, they described their music using silly wordplay (think shitty spaghetti), but I was treated to an honest narrative of the difficulty the duo faced when trying to reconcile their mainstream success with their underground vibes. Dylan explained the hesitancy and lack of support they originally received from certain venues and major labels due to the obscure nature of their image. I joked calling them a “brand relations nightmare” to any major EDM source trying to fit them into the mold they clearly didn’t want to be a part of. While offbeat artists have the chance of reaching mainstream success through internet virility, Ben and Dylan emphasized the blood, sweat, and tears they put into their work and how it took a longer time than most for labels to take their act seriously. Their style stays consistently avant-garde and being themselves in a commercially aggressive industry originally made some of the bigger leaps into stardom difficult.

As the conversation came to a close, I inquired about their upcoming work. Unfortunately, the details they gave seemed vague in regards to their new material, but emphasized their upcoming work with larger labels and expanding their sound. Sitting down with um.. cemented my view of the EDM mainstream while detailing the experiences self-made creatives fight to survive in an industry constantly against them. If I learned anything about overcoming the status quo from um.., always take on the naysayers’ rejection with grace and humility, but use your work to show your truest self and fiery passion.