As dance music continues to grow, it is important to take note of all outside influences that may or may not cause DJs, promoters, managers, agents, and even fans to lose sight of why dance music exists in the first place and the weight of the message that it carries. Having started out as an underground scene and developed into something that has flourished into a mainstream, yet still unique, body of entertainment, dance music is quickly inching its way into some of the political problems that surround popularity amongst musicians and those issues that effect the way that we perceive “talent”. 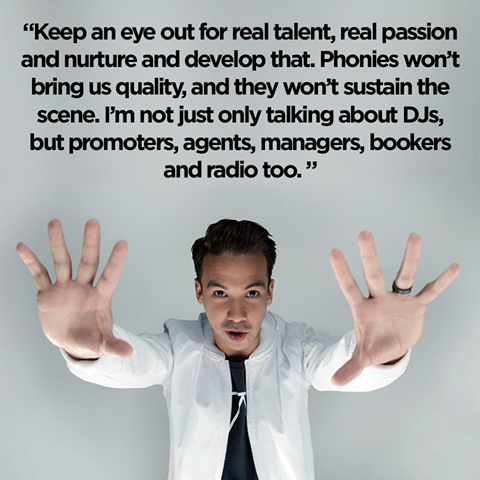 Filipino/Dutch DJ, Laidback Luke, who has been in the industry for over 2 decades, just came out with an op-ed article in Billboard Magazine in which he discusses these issues. He details the politics of record sales, how social media can effect the way an artist is digested by the audience, and even how hype can be the EDM death machine much like it was for the Mayweather-Pacquiao fight. The industry has become a numbers game and that is not the way it was meant to be.

The producer also gives his unique perspective on how dance music must ride on those individuals who are passionate for it. At a certain point, when people are in the game for the fame and the money, they begin to become representative of what is wrong with popularized dance music rather taking the newfound limelight and using it to project to the world what dance music is and always has been about. As Luke says in the article, “Phonies won’t bring us quality, and they won’t sustain the scene. I’m not just only talking about DJs, but promoters, agents, managers, bookers and radio too. Everyone has their part to play. It’s all our responsibility to step it up and let it grow, rather than let it sink.”

Check out the words of Laidback Luke here.

Watch this insightful scribe and this talented producer with a deep passion electronic music narrate to you what it means to hold something near and dear, but this time with his beats rather than his words. Come out to Talking Stick Resort for Labor Day Weekend where you can catch Laidback Luke on Sunday, September 6th as well as Zeds Dead the day before!