As Nocturnal Wonderland’s 20th anniversary comes to a close, it’s time to start planning an even bigger celebration – 20 years of the Electric Daisy Carnival. Since its beginning, the Electric Sky has dawned in over 18 cities, 74 times throughout the world. What was once a one-room, one-stage show at the Shrine in L.A. has grown into a movement that not even the visionary Pasquale Rotella could have planned. It has grown into a city of lights whose existence only lasts for 3 days and 3 nights, dusk ‘til dawn, where people from all over the nation, better yet, all over the world come together.

Hundreds of thousands of Headliners have congregated Under the Electric Sky, feeling the true magic of the festival over the years. As many of their competitors continue to ban staples of the EDM culture, such as totems, kandi, furry boots, light gloves, and more, Pasquale Rotella and his Insomniac team are the only ones to full on embrace these elements of the EDM community and allow for the free-spirited self expression at their events, staying true to their mantra of being all about the experience.

Over the years, the artists may be different, the costumes may have changed, but PLUR is still alive and the energy is greater than ever. Pasquale Rotella’s dream has grown to be so much bigger than he ever could have imagined; it gives me goosebumps just thinking about it! What we now regard as one of the biggest, best music festivals in the western hemisphere has been 20 whole years in the making.  Insomniac has made their very first announcement for the 20th anniversary EDC Las Vegas celebration. The dates for the 2016 festival will be June 17th – 19th and passes for the event will be going on sale Monday, September 21st at noon PT – so mark your calendars! 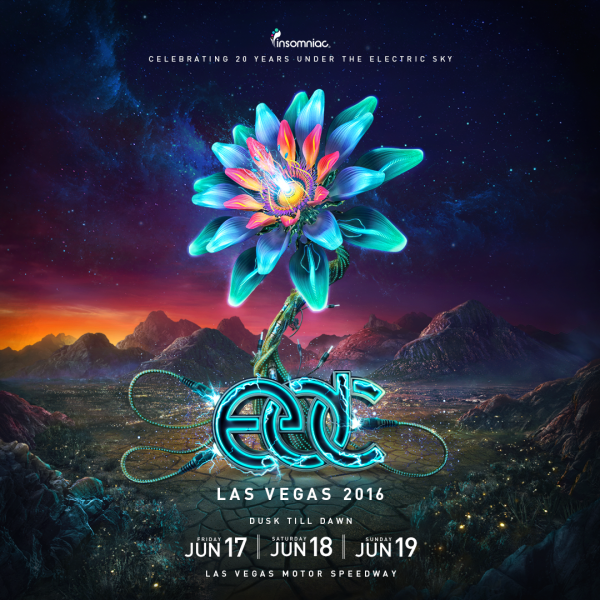 In addition to the announcement video containing footage of EDC Vegas 2015, Insomniac has also done something else very special. Posted on the Electric Daisy Carnival (EDC) Facebook, they have added a new album featuring all the previous Electric Daisy Carnival flyers in its many different homes, offering a look through the history of EDC.

1997: The first ever EDC took place at the Shrine Auditorium in its original home of Los Angeles 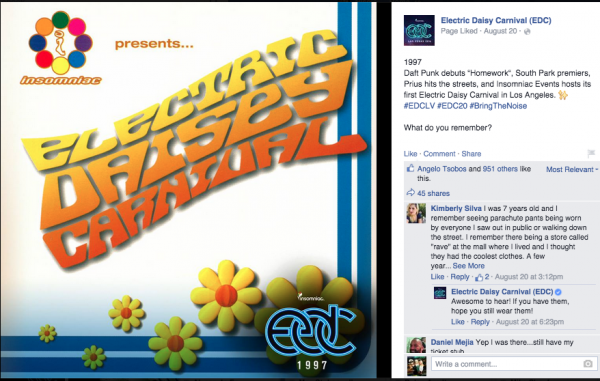 1999: Can you believe EDC ever took place at a waterpark? 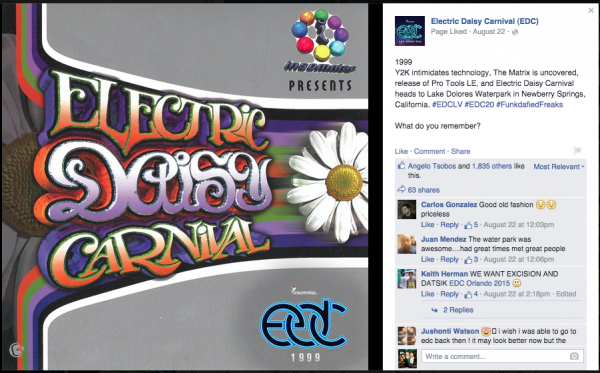 2001: EDC travels to yet another location and for this year, expands to 6 stages: the Merry Go Rounds, the Fun House, Clown Alley, the Confusin’ & Amuzin’ Mirror Maze, Bassrush Arena, and Cosmic Healing Temple 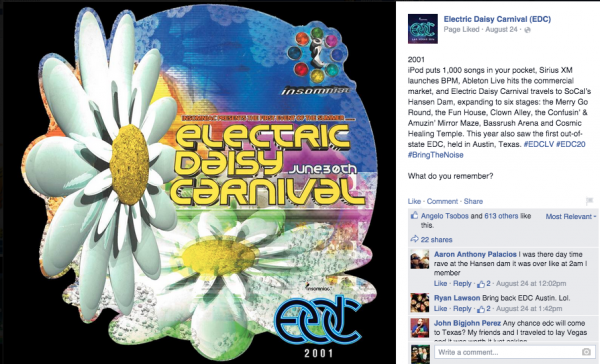 2003: The first year EDC came to the infamous NOS Events Center – where this year’s Beyond Wonderland took place 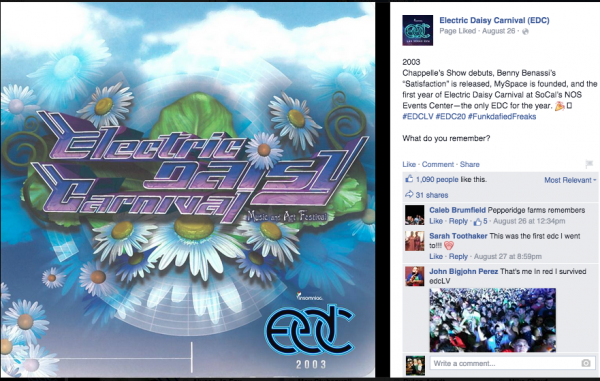 Chappelle’s Show debuts, Benny Benassi’s “Satisfaction” is released, MySpace is founded, and the first year of Electric Daisy Carnival at SoCal’s NOS Events Center—the only EDC for the year. 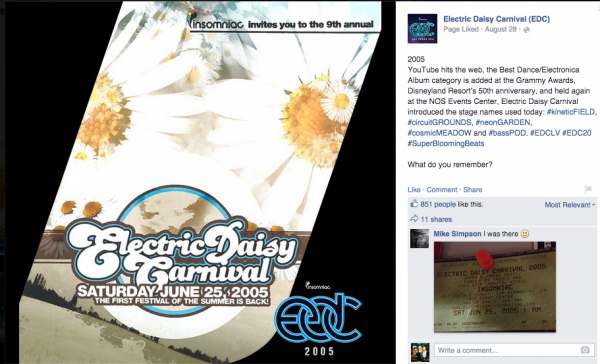 2006: EDC celebrates 10 years of dance with its last year at NOS Events Center 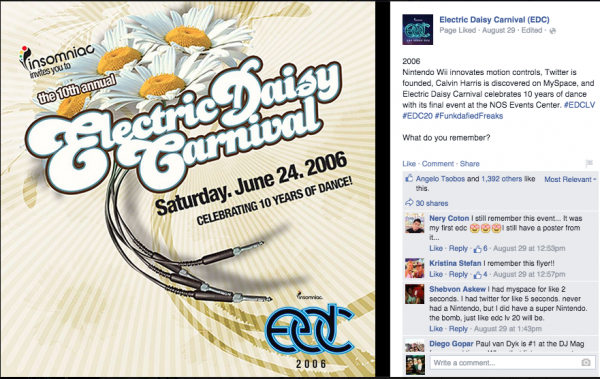 2007: EDC moves to its new home at the Los Angeles Coliseum 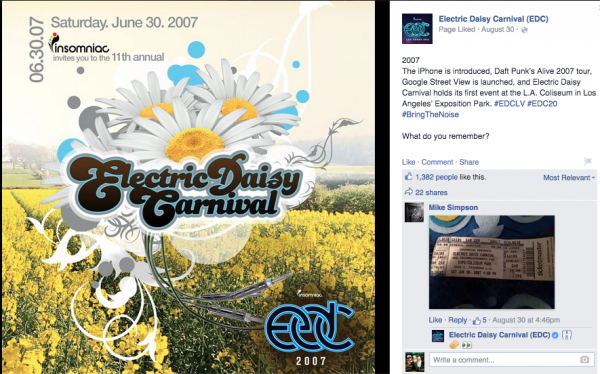 2010: EDC has its last year at the Los Angeles Coliseum before it moves to its new and current home 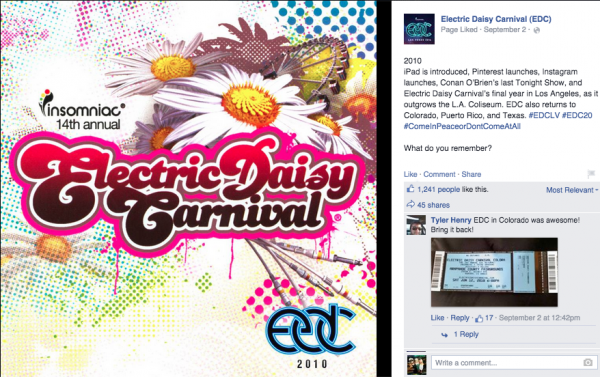 2011: The Electric Daisy Carnival is held from dusk until dawn for the very first time and expands to 3-days in its new home of Las Vegas 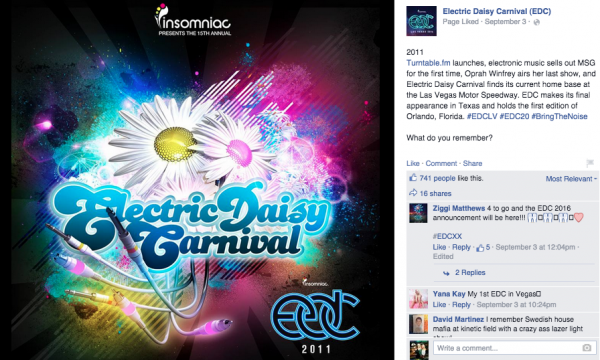 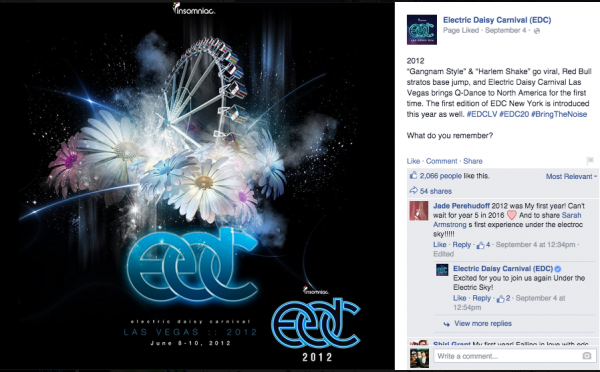 What I like to call the REAL happiest place on earth has been growing and evolving for the past 20 years. Anyone and everyone who has experienced the pure joy and excitement Under the Electric Sky should join us in celebrating 20 years of EDC.