Going into Nocturnal I was definitely excited for Slander‘s set, but didn’t have a clue how much I would actually love it. I wouldn’t say that I’m a die hard fan or anything, but the few songs I had heard by them prior to their performance I really liked, and their set then solidified their spot on my list of favorite artists.

Slander includes California natives Derek Andersen and Scott Land mainly producing trap music — or as they like to call it, “trapstyle.” From “heaven trap” to downright and dirty festival-style bangers, Slander has been throwing down constantly, and they’re showing no sign of slowing down any time soon. From their heavenly remix of Above & Beyond’s “Love Is Not Enough,” to the banging facelift they gave Showtek’s “We Like To Party,” Slander are relentlessly vicious when it comes to their music, consistently releasing amazing tunes time and time again.

The duo has worked with multiple different artists but the one they enjoy working with most is their close friend NGHTMRE. NGHTMRE hit the dance scene like a sweet dream releasing tracks at a frenetic pace since he got here about a year ago. The 24 year old’s remix of Showtek’s “We Like To Party” with Slander has been championed by the likes of Diplo, Carnage and DJ Snake to name a few and garnered almost 5 million plays online.  Soon after the releasing the remix of Showtek, NGHTMRE signed with Hashtag JukeLife Management, who in turn quickly signed him over to Ben Hogan & Steve Gordon at Circle Talent.

When asked in an interview with YourEDM, “How have collaborations with artists influenced your sound?” Derek says: “Well when we work with other people, especially when we work with Tyler [NGHTMRE], we come up with ideas we wouldn’t normally have. That snare in the remix to Alison Wonderland’s ‘U Don’t Know’ was literally recorded by hitting a pan, and then we layered it on a snare, that’s why it sounds like you’re hitting a metal hammer. The cool thing about Tyler is that he’s really good about sound design and we’re good with arrangement, so pairing the two helps us finish our tracks in half the time while still getting to work with one of our closest friends.”

Relentless Beats brought NGHTMRE to Arizona a few weeks back, and I was heartbroken when I couldn’t attend because the show was 21 & up. I can hands down say that Slander was my favorite set at Nocturnal, but my favorite moment of their set was when they unexpectedly brought NGHTMRE on stage. Their set had a good vibe to it from the start as they came on stage just as the sun began setting. I’v never experienced live music in such a beautiful setting. The music being played was just as dreamy as the setting. After an hour of mind blowing music, Slander thanked their fans in the crowd for getting them where they are today, saying that last year they performed at Nocturnal as guests and this years performance was their best one yet. I could feel the emotion in these words and truly appreciated every second of their set for that reason exactly. Its easy to see that these guys are passionate about what they do and that the love from their fans is what keeps them going. 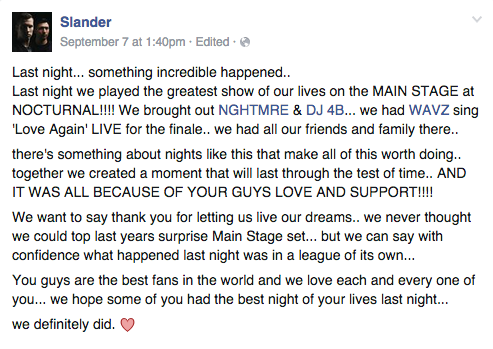