DJ Snake has joined forced with fellow French DJs Tchami, Mercer, and Malaa to create the Pardon My French tour in April. The tour will be hitting six major cities around the country including Chicago, Philidelphia, Dallas, Detriot, Washington, and San Francisco. DJ Snake, Tchami, and Mercer have toured under the same Pardon My French name before but with newcomer Malaa joining the lineup, we can expect this show to be one for the books. 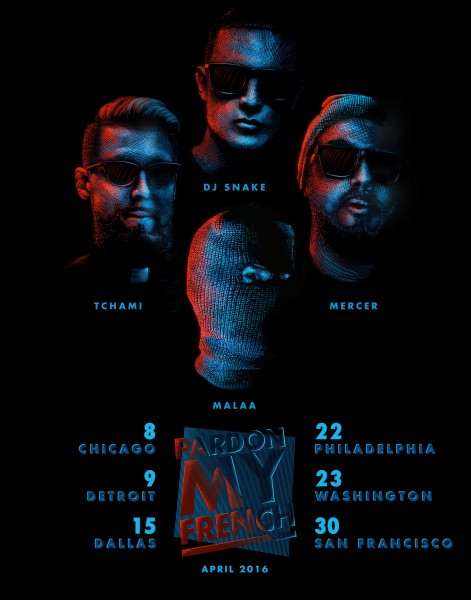 Malaa’s hidden identity has caused tons of rumors and speculations across the internet.  Similar to that of Marshmello, Malaa’s true identity is hidden by a mask. First appearing on Tchami’s label, Confessions, many have speculated it is Tchami himself creating a new persona (à la Oliver Heldens’ secret identity as Hi-Lo). Other speculations have even pointed to DJ Snake and Mercer among many. There even is a speculation that Malaa is simply the trio working together to create a single entity. Maybe this tour will finally give us the reveal we have all been waiting for.

DJ Snake took the EDM scene by storm in 2013 with his platinum single “Turn Down For What” and has continued his success with hits like “Get Low” with Dillon Francis and “Lean On” with Major Lazer. The Grammy nominated producer will take the stage April 3 at Phoenix Lights at Margaret Hance Park. Tickets are on sale now!

France’s finest electronic DJs will be taking the stage to deliver the show of a lifetime. Tickets go on sale Friday at 1pm EST.