Phoenix Lights 2016 is the follow up to last year’s inaugural edition of the festival that took place in the heart of Downtown Phoenix at Civic Space Park. Lights returns as an even bigger festival spanning two days with multiple stages and the biggest names in EDM. Check out photos from Phoenix Lights 2015.

Look out this week for many, many announcements coming very soon!

Step 3: This is where you can see the amounts due, schedule of payments, and change payment.

They say that fortune favours the brave. For Eric Prydz, a bold musical agenda and an unrivalled ability to combine commercial success (3 x Top 2 UK hit singles) with underground notoriety (fastest selling release ever on cult download store Beatport), has allowed him to … Read More

Ephwurd is the brainchild of Datsik and Bais Haus. The project was originally cloaked in mystery, although the men behind the music quickly became clear because of: one, the similarity in sounds, and two, because Datsik and Bais Haus were the only two artists followed … Read More

Some may know Marc Kinchen as an icon of the dance world, some may know him only by his initials, "MK", and then there are others who only know his music. This has been MK's experience ever since his breakthrough remix of the international classic … Read More

Emerging from relative obscurity in early 2007, in just a few short years Tritonal has become one of the most recognizable names on the modern trance and progressive world stage. Both exceptional talents in their own right, Chad Cisneros and Dave Reed formed a prolific … Read More

Three years ago, fellow DJs Jim Aasgier, Nizzle and MC Bizzey teamed up to form the creative and innovative group Yellow Claw. A big part of the Yellow Claw success are their trademark skills, interaction with the audience, their music videos and a sound that … Read More

Bakermat is one of the biggest rising stars of the last year. With his new sound he immediately captured the hearts of a wide audience. His breakthrough was his production called ‘Vandaag’ with more than 17 million views on YouTube (http://www.youtube.com/watch?v=yzCWGGG2gQc). He laid the foundation for … Read More

Black Tiger Sex Machine are a trio of electronic music producers from Montreal, Canada. Known for their heavy electro and bass sound, they perform a unique show in which they combine tracks, loops, drums, samples and synths into an intense barrage of sounds and beats, … Read More

Zero f*cks given – some would argue that’s the mantra when it comes to the Cut Snake way of life. “It’s about enjoying the moment and having a great time,” Paul “Fish” Fisher explains of his group with Leigh “Sedz” Sedley. However, it’s worth noting that … Read More

Mixing a unique future sound with hip-hop and pop elements, Jai Wolf is gaining the attention of fans and influential musicians alike. After Skrillex saw a tweet containing Jai’s bootleg of his hit song, “Ease My Mind,” he immediately signed the remix. Since, Jai Wolf … Read More

Kevin Chapman’s introduction to dance music was at age 12 when he stumbled upon music from the likes of Fatboy Slim and Moby. In 2008 he got his first copy of the digital production software, Reason, and started producing his own dance music. Slowly but … Read More 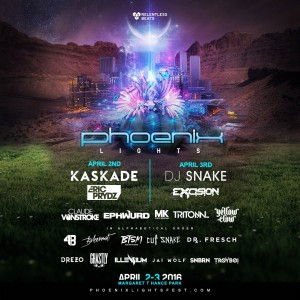