Politics usually aren’t the topic of my conversations, but lately something in the presidential campaigns happened to catch my eye and I think everyone would get a kick out of this one. For those of you who aren’t familiar with with any of the campaigns currently going on or who is running, one of the candidates running for the republican party goes by the name of Marco Rubio. During Wednesday’s Republican town hall event in Greenville, South Carolina, CNN’s anchor, Anderson Cooper, asked Rubio about his interest in EDM.

Cooper started the conversation by asking, “The other thing I found surprising about you is that you like EDM, electronic dance music. Have you ever been to a rave?”. Rubio chuckled at the last bit of the comment adding “No, I listen to it. I think I’m a little too old to be going to a rave, to be honest with you.” 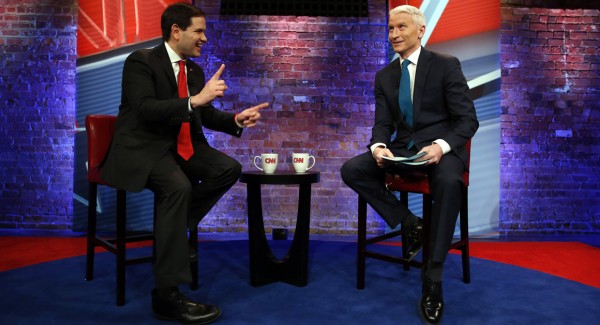 Rubio then proceeded to explain why he enjoy the music stating that, “I actually grew up listening to ’90s hip-hop music, especially the West Coast stuff, and I really liked it. But in the last few years whats happened with EDM, you’ve got these electronic disc jockeys, or these DJs that are taking electronic music and overlaying it with tracks from country music and all sorts of things. So the lyrics are clean, the beats and music are fun. I’ve gotten into it. It’s a lot of fun.” Rubio also went on to state that he enjoys the music because it is something that he can play in front of his kids and they can enjoy it as well.

If you want to go check out the original article go ahead and click here. There’s a video on that page as well of the actual interview that you can watch, it’s pretty entertaining and definitely provides a couple of giggles!