With such an incredible line-up, one that showcases a little-known desert rave’s ability to transform into something recognized nation-wide while maintaining it’s identity, Dirty Disco is bringing to the valley some of the dirtiest talent around. Among them are dubstep lord Getter, special guest Herobust, and supporting acts like Metrik, Wasted Penguinz, Bryan Kearney, and Freedom Fighters.

However, one of the artists playing the bill represents Dirty Disco in a way none of the other artists do. He’s never played the festival before so he is no staple to the brand, however Dirty Audio would seem to be the most appropriate name to be featured on the roster: “Dirty Audio @ Dirty Disco.” Kind of goes hand-in-hand doesn’t it? 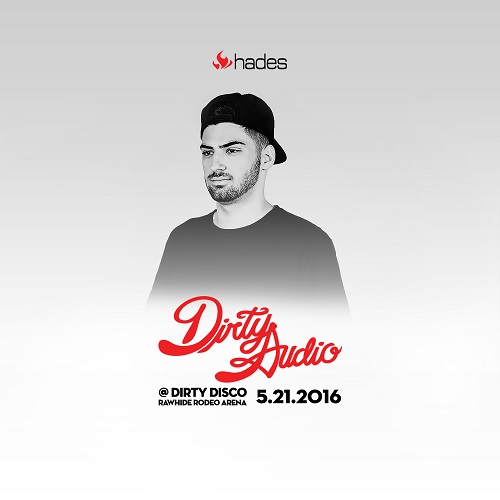 Dirty Audio is one of the key contributors in Deorro’s Panda Funk family, and has released a number of tracks on the label, with Deorro, and alongside some heavy trap producers alike. Just recently Dirty Audio dropped a track with Reid Stefan entitled “Freakem” and have a track “Gettin’ That,” releasing via Mad Decent on May 13th, which was dropped on the mainstage by Jack U at Coachella.

As a bit of a preview for Dirty Disco we got to talk to Dirty Audio about his new music, playing in Arizona, and coming up as a DJ in LA. In addition, Dirty Audio was kind enough to throw together a 30-minute Dirty Disco Mix exclusively for us here at Relentless Beats and Hades. With that said, check out the conversation and the mix below:

Dirty Audio playing Dirty Disco, it seems like a match made in heaven. This won’t be your first AZ experience, but it is your first Arizona festival. Appropriately, sure to be full of dirty vibes, what are you planning on bringing to the Arizona desert for your first fest experience here?

“Arizona always goes hard so I’m excited to be playing at a festival there. Gonna be bringing a ton of new music, and it’s gonna be dirty for sure lol. I try to make every set of mine different so every show gets a unique experience!”

The filth will be in full force I’m sure! Speaking of which, festivals seem to really be calling for Dirty Audio tracks as of late with Jack U dropping your track “Gettin’ That” at Coachella this past weekend. What is it like to hear a track that you made played out at one of the biggest, if not the biggest, festivals in the country by a duo with such a caliber as Jack U in one of the most sought after timeslots of the weekend?

“It’s amazing.. I rewatched it so many times.. I’m really happy to see people are enjoying it.”

“For sure! I’m from California so that’s like one of those festivals you hear about ever since you’re a kid.”

Now, speaking of your own tracks you just dropped “Freakem” with Reid Stefan and MC Vocab, which is a mean track by the way. What can you tell us about this new release and how it came to fruition?

“Reid Stefan has been a homie for a while. We both really dislike generic music, so we were just like yooo lets make a really weird song together! It was chill, we worked on it in multiple studio sessions and we both learned a bunch of stuff from each other in the process.”

When producing a track, how do you get through those moments of “writers block?” What motivates you to say, “alright, I’m gonna sit down, and I’m gonna knock this out”? Any tips for producers going through creative struggles?

“When I have writers block I’ll listen to new mixes, go out and exercise, or just create new sounds instead of creating a song. It’s always easier to work when you have new sounds to work with!”

You are an LA native, and as we all know, the scene in Los Angeles is ridiculously competitive. Can you tell us a bit about your journey through LA Nightlife and how your experiences led to success?

“I don’t think it’s really that competitive.. It’s like a good competition, it makes you want to be different and stand out. It also helped because so many dope musicians live out here, so it’s really easy to collaborate. The parties here are crazy too.. I started going to clubs & underground raves when I was like 14, just going for the music and to see my favorite artists. So it’s kinda crazy now when I’m performing because I was on the other side of the stage a few years ago!”

What kind of mentorship role has Deorro played in your story?

“He’s kinda been like an older brother to me.. He’s one of the first producers that ever believed in me! I’ve learned a lot from him.”

Continuing to develop as an artist is an obvious path to bigger and better things, what are your goals for the long term? What about for the immediate future?

“Long term I wanna be like the #1 producer or something. I don’t know, I don’t really think about stuff like that. I just make music that I like, and if people enjoy it that’s a huge reward to me!”

Now, you have crafted for us a Dirty Audio Dirty Disco Mix. What have you done with this mix to tailor it to the crowd here in Phoenix?

“It’s basically 30 minutes of turn up.. You have to come to the show to get the real experience!”

Can you give us a little insight into the selections made?

Your final words to get us pumped for your festival debut here in Arizona at Dirty Disco?

“Can’t wait to party with u Arizona!! Thanks for having me!!!”

Catch Dirty Audio and the rest of the Dirty Disco lineup on May 21st at Rawhide Rodeo Arena! For more Dirty Disco coverage check our interview with fellow headliner, Getter!