EDC was absolutely insane! With all of the artist that come to play over 3 days, the massive stage production, and the vibes that encompass the entire Las Vegas Motor Speedway, how could it not? We were blessed enough in those 3 days to be able to interview some amazing people and one of those that we got to conduct was between Cookie Monsta, Doctor P, and Funtcase. 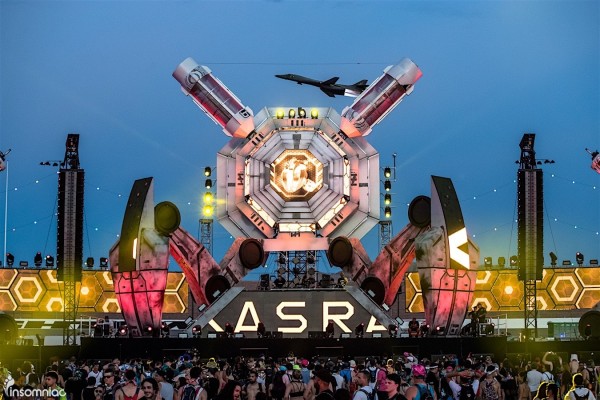 If you’re a fan of dubstep then you’re sure to know these three. They absolutely killed the Basspod stage and were listed #1 in our best set of EDC here at Relentless. If you didn’t see them at EDC you’ll definitely have to catch them next time you can and you’re about to find out why in this interview as well.

So you guys have been doing this insane b2b2b for a little under a year, Moonrise Festival was the first time. What originally gave you guys the idea to get together and do something like this?

Cookie Monsta: I think it was just someone from Circus, like a promoter or something was like could we do it? Cause it started out with just Funtcase and me and everyone loved it, so then we added Doctor P and everyone loved that so we were just like alright lets do it again!

So how is this trio different than from a normal solo set?

Cookie Monsta: Yeah, honestly it’s a lot easier than a normal set, you get a lot more rest time in it.

Funtcase: You can play a couple of tracks and then just rest.

So do you guys do one song each or two?

Cookie Monsta: Well like it depends, 3, maybe another if you can do a quick mix then just do it as fast as you can, but what we usually do is 3 tracks, that’s kind of the usual thing. Two tracks is just too soon and four or five gets to be too much or else the other guys just stand there, so you kinda got to do it quick and bounce off it when it’s not your turn.

It seems like it’s a lot more fun though!

Cookie Monsta: Oh yeah of course, you’re up there with your friends!

So when you guys get up there do you play out a lot of unreleased music or is it the stuff that you’ve had out for a while?

Funtcase: Well it depends really on what we got. We were going to do some tonight but they’re streaming it so we can’t do that now.

So what about collabs between just two of you? Because there’s only one song “Adrenaline” between the three of you right?

Doctor P: Oh man that song was years ago, we only have that track between the 3 of us.

Is there anything between the three of you that you have worked on recently?

Doctor P: We have been talking about it though recently, but nothing is there yet really.

Funtcase: The only reason that track really started in the first place was because we were all bored in Australia at one point.

Doctor P: I think I made the drums, and then sent it over to Tony [Cookie Monsta], who sent it to James [Funtcase] who did the main synths.

Tony [Cookie Monsta], you recently just came out with your Wobble EP in which you try to bring back the “wubs” or the “wobble”. Was it difficult trying to integrate older styles of dubstep with today’s much higher energy dubstep?

Cookie Monsta: Yeah it was very hard, it was like fighting a brick wall, but there’s been quiet a lot of notice with the EP which is nice.

Doctor P: Yeah I was so relieved when he sent me that EP cause it was so wobbly and I was like thank god!

Funtacse: Wobble was like the main thing everyone liked and then it just disappeared.

Cookie Monsta: The thing is was that when Rusko was at his top, he just stopped doing that sort of style and then like everyone else just stopped.

Doctor P: Yeah Cookie Monsta is like the only one doing that sort of stuff right now, but it doesn’t even sound old it still sounds like a fresh EP.

James [Funtcase], you’ve just finished up your Neckbreaker tour, you had an awesome show in Arizona, since that has been your project lately, what is coming up next for you?

Funtcase: Pretty much just loads of studio time and coming to the states a lot in all honesty haha!

Shaun [Doctor P] you co-found Circus Recordings with Flux Pavilion when you were only 23 years old so how does the industry compare to then as it does current day since you’ve been such a staple for a long time?

Doctor P: Yeah I mean well like dubstep today is all like festival dubstep you know like tonight. Stuff like Zomboy and what not. So you know I’ve definitely seen the scene from where it’s come, but dubstep as a whole is still alive and well

So are you going to playing a lot of older dubstep stuff tonight?

Doctor P: Uh, well I don’t know really, I don’t even know what you would call older dubstep. Cause Zomboy is more of the newer style but as a whole we probably lean on the older style.

What’s your opinion on the statement that dubstep is dead?

Cookie Monsta: Well you know people are saying that, but you know it’s still been around for the past 5 or 6 years and we’re still traveling the world!

Doctor P: When we were starting Circus, we were trying to get a distributor to distribute our music and they told us in 2009 in that dubstep is dead.

Do you guys get a lot more shows out here in the states then?

So being that dubstep and drum and bass are more popular in America, why do you think that your show in Arizona with [Cookie Monsta] Noisia, and Dieselboy is something people don’t want to miss?

Cookie Monsta: I mean it’s just great music really, you know Dieselboy I was listening to as a kid and he is the one who really brought Drum and Bass over into America so it’s crazy that he is still doing his thing. Obviously Noisia is Noisia and like you can’t miss that for any reason.

So what side of the world do you enjoy playing for more now days Europe or America?

Cookie Monsta: I mean it’s differnt you know, like EDC is crazy is just a huge sea of people and the sound system is amazing so it depends on what sort of set you wanna play, but usually it’s just like EDC and stuff they’re so crazy.

Given the fact that people kind of say dubstep is dead, what do you think is going to bring it back to the top?

Cookie Monsta: You know it’s just like, kids follow trends. The thing is we have so much connection to music that every single age feels like that their time is their music. So every few years, it feels like it’s their music, and as time changes, music changes, and everyone’s taste changes.

So how fast do you think dubstep alternates into the trendy music?

Cookie Monsta: It’s so fast now because of the internet, like we have soundcloud and youtube and you can listen to it at any second of the day at anytime. Back in the day everyone had vinyls and you would cherish the vinyls and it would last longer because it’s so unavailable! It’s not like itunes where, here it is, here is another, bye. But within like a year it’s like 2 new genres are here and then another 2 years later everything is completely different and everyone is more willing to jump from place to place.

What other artists do you think are leading the way today for dubstep?

Doctor P: Diskord is the artist I’ve got my eye on. They’ve just done a track with Krewella and it’s a really English sounding track it’s really good.

What advice would you give to someone who has just started producing and wants to be up on the big stage one day?

Doctor P: If you wouldn’t play it out in a club it’s probably not good enough.

Funtcase: Just do your thing, it’s a cliche, but it’s very true.

Don’t forget to get your tickets to Cookie Monsta at The Pressroom who will be playing alongside Noisia and Dieselboy on July 15th!