The FULL Nocturnal Wonderland 2016 lineup is officially here! Added to an already lit lineup, Insomniac has truly outdone itself for the 21st installment of the original Wonderland music festival. This year they’ve curated an eclectic selection of artists from all across the electronic dance music spectrum. Returning to San Manuel Amphitheater in San Bernardino, California, North America’s longest running dance music festival boasts over 100 world-class artists on five Alice in Wonderland themed stages for three nights of the festival and four nights of camping and dancing under the stars. 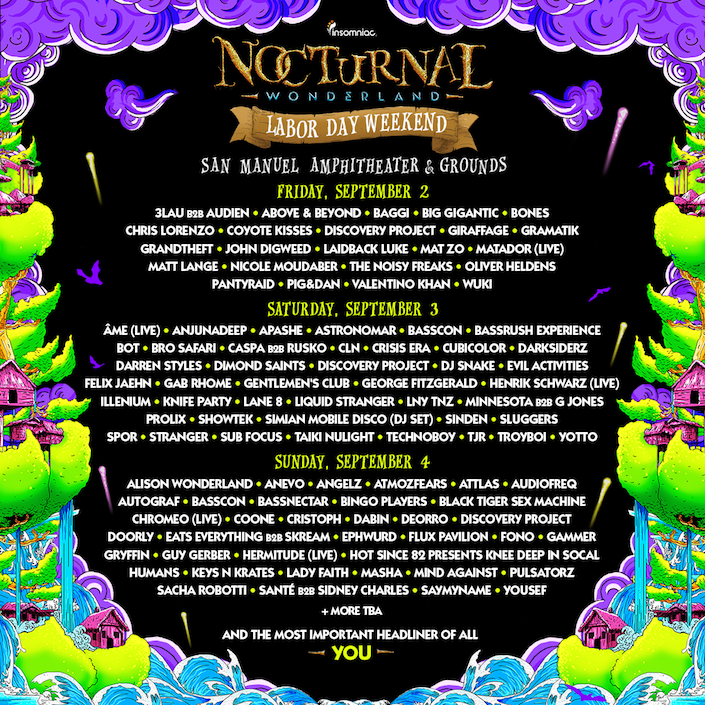 Over Labor Day Weekend, the three-day celebration will feature heavy weight artists such as Above & Beyond, DJ Snake, John Digweed, Lane 8, Guy Gerber, and Eats Everything B2B Skream, as well as artists who will be making their Nocturnal Wonderland debut such as Big Gigantic, Chromeo, Gramatik, Gryffin, and Hermitude. Some artists that I am especially excited about in this new lineup addition include Ephwurd whose EDC set was 10 times as lit as Phoenix Lights, Grandtheft who will be coming here this Fall for Mad Decent Block Party, and an extra special B2B with my main man 3LAU and Audien!

To give your eyes a break, quit straining them to stare at the lineup and let your ears do the work. Insomniac has put together a playlist of about 100 songs of artists that will be playing at this year’s Nocturnal Wonderland. Expose yourself to the diverse collection of talent and prepare yourselves for the best Labor Day Weekend of your life! Nocturnal Wonderland 2016 takes place September 2–4 at the San Manuel Amphitheater & Grounds in San Bernardino, CA. Tickets are available now. Insomniac has also just released GA and VIP single-day tickets for all you lovely Headliners. For more information, visit the official website.