Daft Punk — Are the Masters Behind the Masks Alive from the Dead?

Well….it’s that time again. Time for what you ask? It’s something we’ve all gotten very good at in the past years…trying to chase down the legends in costume, Daft Punk. The rumors of Daft Punk’s upcoming world tour are spreading like wildfire, but with their sneaky reputation of playing mind game after mind game, can we really be sure?

Anxiously curious fans wondering the awaiting news, as we keep in mind the past Alive timeline, their last two live albums were released 1997 and 2007, wouldn’t 2017 only make sense?  The conspiracy theories only get more cryptic as a new website suddenly popped up into the universe. All black with only one word, “ALIVE.” 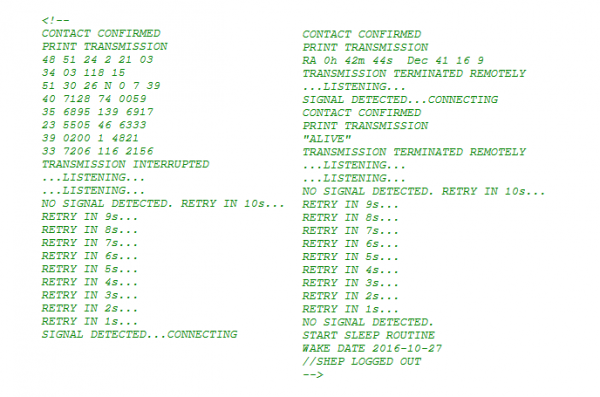 Though it looks like a simple taunt, the website is crawling with hidden messages. As investigators search through the code to find any suspicious hints, the legendary pair hid coordinates for 8 locations, likely the locations of an upcoming tour: Paris, Los Angeles, London, New York, Tokyo, Sao Paulo, Ibiza, and last but not least, Indio. And it doesn’t stop there. Another clue is uncovered in the source code, reading “SHEP LOGGED OUT,” Shep being the pilot from Daft Punk’s movie “Interstella 5555.”  There is also supposedly a timer marked by numbers behind the “I” which will end October 27th of 2016. What will happen then? Only time will tell.

Though it is almost instinctive to be skeptical of the robots’ plan, there is always a little piece of us that is begging it to be true. If the rumors and uncoded messages are true, we might be in the midst of another Daft Punk breakthrough that will go down in history.

So, whether or not this goose-bump worthy turn of events is legit, or just another hoax from the masked masters themselves, let us all cross our fingers that Daft Punk will return from the dead to shake the earth once again.