Bijou has just announced his first 20+ date tour, The Guru Tour, which is set to kick off on December 30th with our very own Decadence Arizona at Rawhide Event Center. This announcement comes trailing confirmation that Bijou would be performing at Avalon Hollywood for the very first time as support for Dirty Audio on January 13. 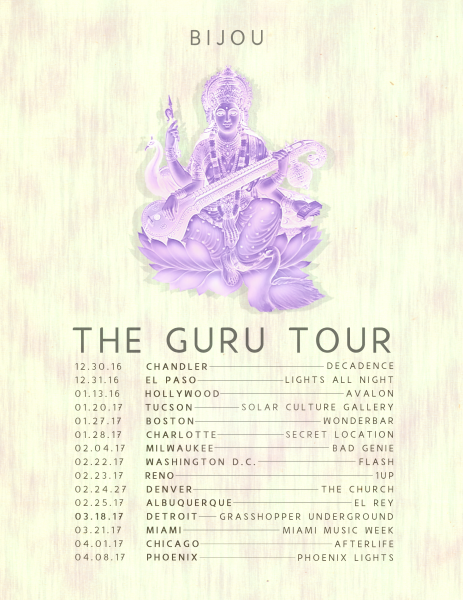 Other notable dates to be included on Bijou’s largest tour to date include his NYE play at El Paso’s premiere New Year’s festival Lights All Night, Miami Music Week, Phoenix Lights Festival, as well as shows in Washington D.C., Denver, Detroit, and Chicago.

“The Guru tour started off as a fun idea, like hey why don’t we put together a tour branded around this record. Once the track was done we thought okay this could be a big one, & decided it could actually happen. For this mix I wanted to showcase some of the stuff ill playing on tour and some unreleased originals as well. Im so proud to present it to you now & wanna give a HUGE shoutout to my team for working around the clock to make it a reality!”

The Guru Tour come following the release of his latest track of the same name which received immediate support from The Chainsmokers, Night Bass, and many others; as well as a new mix in support. Check them both out here:

Don’t miss out on the start of Bijou’s Guru Tour on December 30 at Decadence Arizona and stay tuned for more date announcements in the very near future!