Get Lucky at this Year’s Pot of Gold Music Festival

St. Patrick’s Day has been a tradition carried out in the United States for centuries. Even though only some of us have a bit of Irish in our blood, Americans have been groomed to celebrate St. Patty’s every year. Luckily, Pot of Gold Music Festival is coming to Rawhide for two days of rap and reggae inspired rhythms to guarantee you have a solid way to celebrate St. Patrick’s Day weekend.

Pot of Gold is one of Arizona’s fastest growing music events. Originally at Tempe Beach Park, the festival was moved to Rawhide last year due to the immense amount of growth in attendees. People from all over the west coast gather for the always exquisite lineup. The 2017 lineup consists of some of today’s hottest names in hip hop, reggae, pop punk, and ska music. G-Eazy, Death Cab For Cutie, Sublime with Rome, Less Than Jake, We The Kings, and Grizfolk are just some of the artists that will be taking the stage. 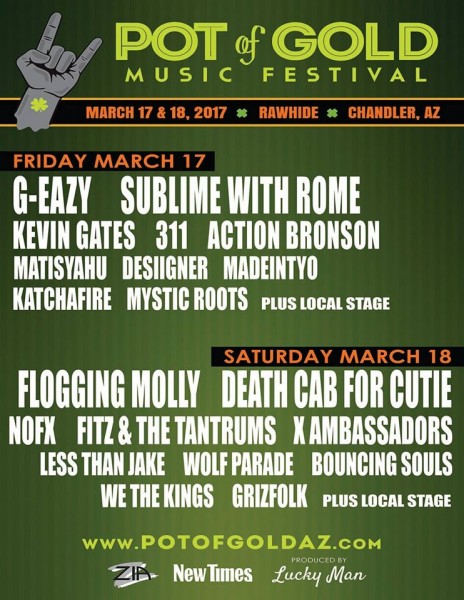 In addition to the headliners there will be a stage put together specifically for some of Arizona’s local talent. The state is filled with singers, rappers, instrument players, bands, and all sorts of other musical experts. The lineup for the local talent stage has not been announced yet, so keep an eye out for the release.

Additionally, to make sense of things for festival goers, Pot of Gold divides the two days up by genre. In recent years, they’ve incorporated similar genres into single days of the event to make sure everyone receives the full value out of their ticket. This year, it’s a bit narrowed down as day one will consist of hip hop and reggae and day two will be more punk and alternative influenced. Doing this will surely benefit attendees of the event, for they will continuously enjoy music of their taste.

So whether you’re a fan of Desiigner, Flogging Molly, Bouncing Souls, or Kevin Gates, catch ‘em all at the 2017 Pot of Gold Music Festival. St. Patrick’s Day weekend in the valley is going to be a success, so come test your luck. Tickets have been on sale, so grab a single or two day pass here and make sure to join the event page.