Since first getting involved in the electronic scene three years ago I’ve done everything I could to avoid camping festivals. My need for comfort and daily showers always outweighed my desire to attend a festival that required me to camp.

When Insomniac and CP3 Presents dropped the lineup and theme for their brand new festival Middlelands however, I decided it was time to give up the luxuries and give camping a chance. After spending four days in the beautiful Texas woods I finally realized what all the hype is about. The camping vibes, activities, and overall atmosphere made for one of the best weekends of my life. It’s been two weeks since I left the grounds. I’ve had some time to reflect on this incredible experience; here’s what I learned and experienced at my first camping festival:

Most importantly, I learned that the party never stops–or starts too early–when you’re camping at a festival. My group and I arrived Thursday afternoon, a day before the festival, and things were already in full swing. The official pre-party, hosted by Bassrush and featuring 12th Planet, Crizzly, Space Jesus and more, felt more like an official rager than a pre-party, and fans were fully prepared, donning fun costumes and festival totems. This was just one of four pre-planned parties a the Conqueror’s Court that hosted Louis the Child, Snails, What So Not B2B QUIX, special guests and so much more over the weekend. 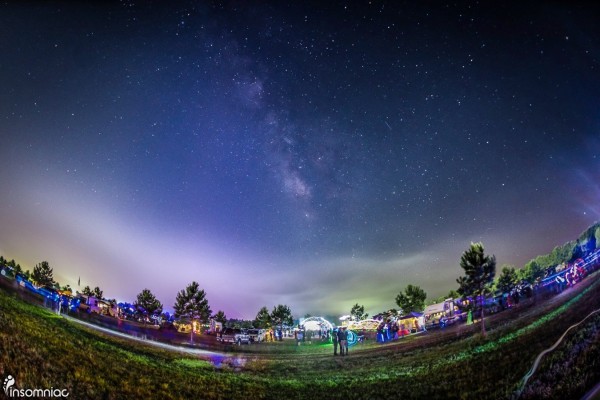 In addition to the official pre and after parties hosted by the Insomniac sound camp, the sound camp area of the camping grounds kept the party going, to some campers dismay, into the wee hours of the morning. This is where the most dedicated of festival-goers could be found, braving the chilly night time temperatures and impending sunrise to keep the vibes alive.

Insomniac provided plenty of activities like archery tag, ball wrestling, crafts, and tie-dye stations to keep campers entertained outside of the Middelands festival, too. Even before I woke up each morning (about 10 am) there was music playing and people laughing and loving. 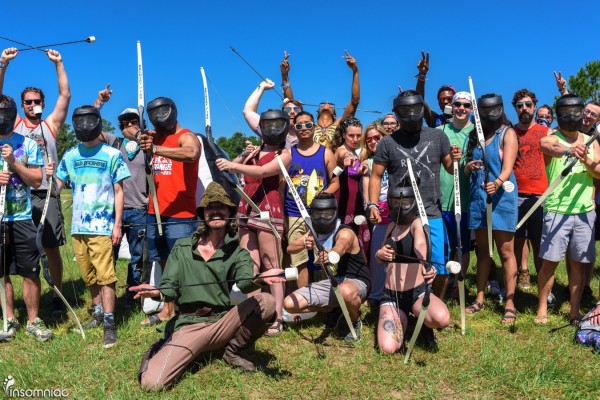 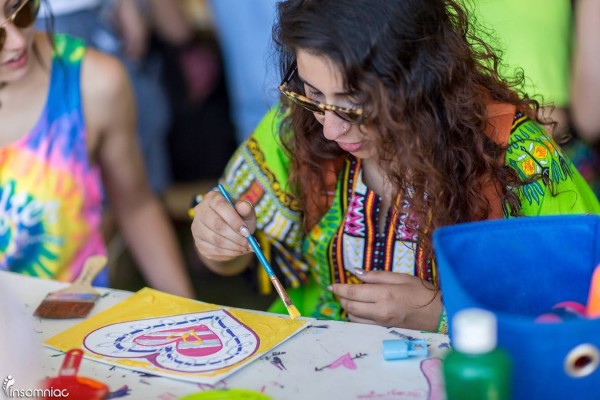 Being as I’ve never camped at a festival I wasn’t sure what to expect. I figured the friendly vibes crossed over from fest to camping but it exceeded any expectations I might have had. Campers weren’t just friendly, they were like family. One thing that really stood out to me was the ‘give something, take something’ signs like the one pictured below. This was just one of many I saw while exploring the grounds. It was such a thoughtful way to connect campers. I stopped each time I passed one. I left blow pops and paper fans, and took a cool sombrero necklace (on Cinco de Mayo!) and a Bassnectar Decal. 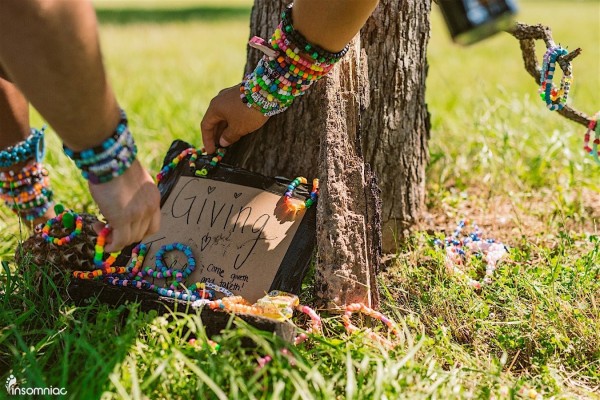 Camping was also the perfect way to meet new people and make friends that I might not have otherwise. Festivals are busy and chaotic from start to finish. Between scheduling conflicts, running around to catch all my favorite DJs and trying to take in all the festival has to offer, it’s hard to take a step back and just connect with the other festival goers without worrying about what I may be missing elsewhere. Camping gave me this opportunity. I met so many amazing people waiting in line at food stands in the morning, around the bonfire, walking through the neon garden at night, in the line for showers, and just walking around the grounds in general. I was always met with a friendly smile and a helping hand when needed. We shared camping supplies, beverages, and at one strange point a Nickelback sing-a-long with our neighbors. It was all part of the experience. 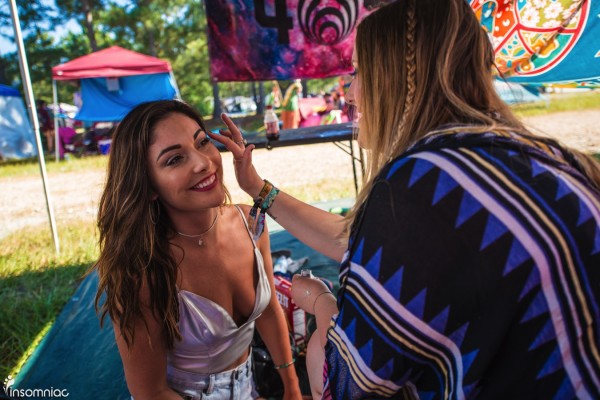 Another thing I really loved about camping was how diligently it kept the festival theme alive. The day of a festival is exciting enough, but being fully submerged in a totally themed atmosphere really provided a new level of excitement. Anybody who’s been to an Insomniac event knows they go all out, but their level of dedication to keeping things magical is astounding. Throughout the campground, on every few light poles, there would be clever signs written in medieval tongue. Most of them were funny, such as ‘to thine window, to thine wall’ and ‘hide thine infants, hide thine wife’ and my personal favorite, ‘my milkshake bringeth all the boys to the yard,’ while some offered thoughtful sentiments like ‘love thy neighbor.’ 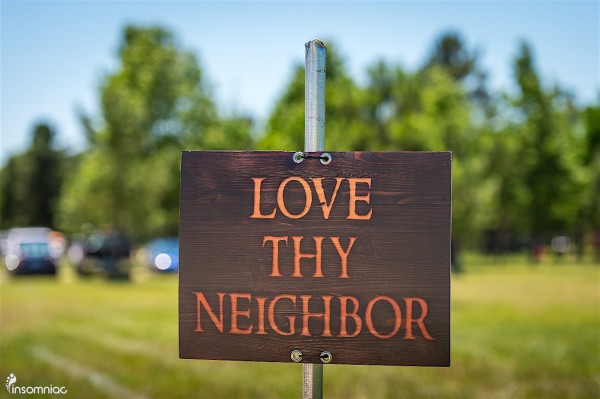 Last but certainly not least, I learned that camping is probably the safest, most responsible and enjoyable way to enjoy a festival! Ground Control, a staple at Insomniac events, weren’t limited to the festival. They walked the camping grounds making sure guests were having fun and being safe there, too. On the first day we arrived, security gave us instructions on what and who to text in case of an emergency situation. This helped ease any last worries I may have had entering the weekend. 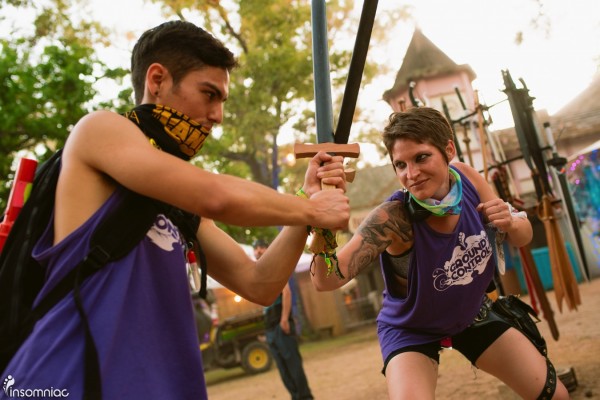 Additional safety measures were just one added benefit of camping. I don’t know about you guys, but one of the biggest decisions my squad has to make before a festival is who’s getting us home safely. Camping completely alleviated that stress. It was a short fifteen-minute walk from the festival to our camping spot–the quickest I’ve ever gotten ‘home’ from a massive! I imagine my driving counterparts didn’t have it quite so easy. My group opted for a ‘premium GA’ spot that came with shaded spots and air-conditioned bathrooms. It was pretty enjoyable as far as camping goes, plus we got all the awesome extras I just talked about, and it was less than $100 a person to enjoy it all weekend long.

On the way out we were met with one final message to help soften the blow of leaving this medieval wonderland.. 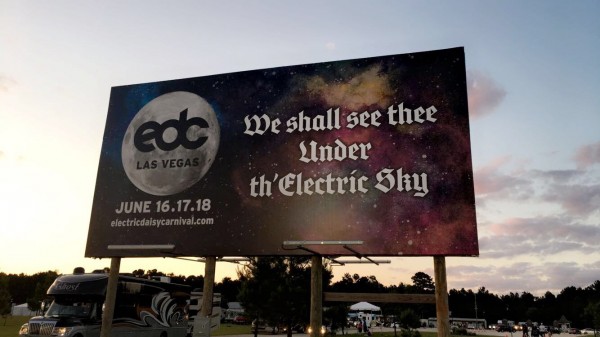 If you’ve been on the fence about festival camping like me take my advice and just go for it! I will without a doubt return for Middlelands 2018 and be seeking out more camping festivals in the future. We shall see thee under th’Electric Sky!