We have a HUGE weekend planned for you guys with nonstop beats day and night. Starting Friday night Dreamstate with Paul van Dyk hits the Pressroom and Louisahhh takes over the Barsmith rooftop. Saturday you can catch Dada Life poolside at Talking Stick Resort and  Bassrush Massive invades Rawhide as the sun goes down. Finish it off on Sunday Funday with Dimitri Vegas & Like Mike at TSR and Lauren Lane at Shady Park as part of our new Blume Summer series.

Dreamstate in an Insomniac brand dedicated to all things trance. Known for the top-notch production value and the huge amount of lasers it’s become one of fastest growing Insomniac brands. In addition to full-blown festivals, Dreamstate has started presenting tours across the country, including Dreamstate presents: Paul van Dyk! After a life-changing incident at a show last year Paul van Dyk is feeling ‘Touched By Heaven’ and ready to tour again. Simon Patterson joins Paul van Dyk on this leg of the tour making for an unbelievable night you won’t want to miss. 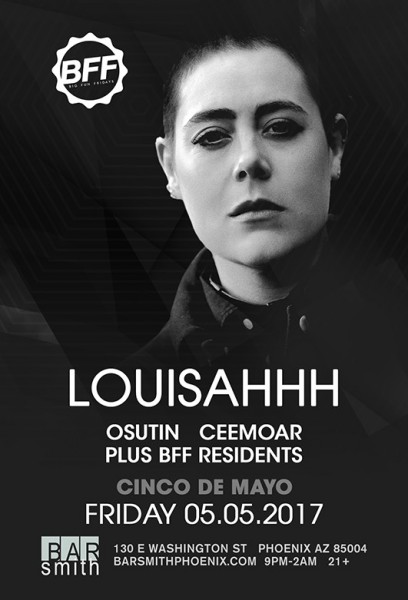 Louisa Pillot, who goes by the embellished stage name of Louisahhh, is a Paris-based rising talent in the underground techno realm. She collaborated with Brodinski on “Let the Beat Control Your Body” and “Nobody Rules the Streets” for Brodinski’s young label, Bromance Records, and both became dance music anthems. She released her first solo EP Transcend in 2013 followed by two EP’s with French producer Maelstrom in 2014 and 2015. Louisahhh isn’t just a great DJ and label owner, she’s a kick-ass singer, too! She often uses her own vocals and sings live during her sets. Louisahhh’s sound is a mix between punk and techno putting setting her apart from her peers and allowing her to take over a niche techno market in Paris. Louisahhh is bringing her Paris vibes to Phoenix for a special Cinco de Mayo show under the stars on the Barsmith rooftop. Get your tickets here!

Normally I would never condone violence, but the ‘Happy Violence’ Dada Life promotes is a little different. The only fights are pillow fights, and the arguments are over who’s raging harder. Dada Life is a DJ duo from Stockholm. They’ve released two albums and a large collection of singles since their musical debut in 2006. They’ve become known for their upbeat tunes and fun lyrics that almost create a genre of their own. They throw record-breaking parties; in 2013, Dada Life broke the Guinness World Record for the world’s largest pillow fight and in 2015 they broke another world record for the most people dressed as a fruit in one place. They’re bringing the party to Talking Stick Resort for a day rager like no other. 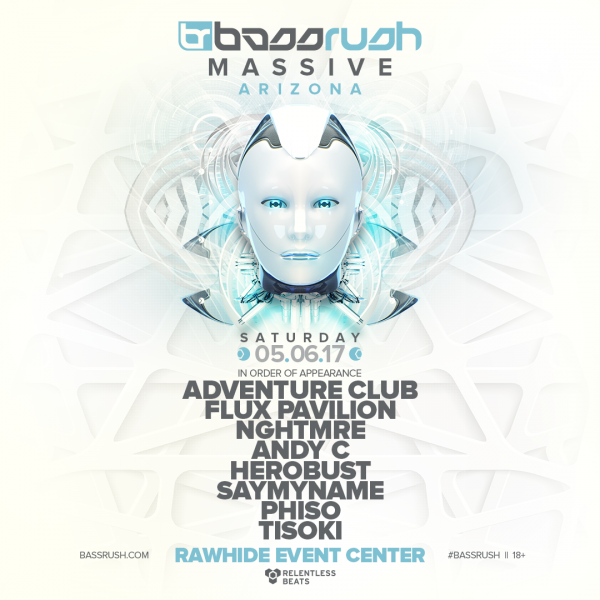 This weekend Bassrush Massive hits Arizona for the very first time with a knockout lineup sure to please all the bassheads! Bassrush is an Insomniac brand dedicated to headbanging worthy tunes. The lineup includes Adventure Club, Flux Pavillion, NGHTMRE, Andy C, Herobust, SAYMYNAME, Phiso and Tisoki. Bring your neck brace and prepare to go hard all night long! Get your last minute tickets here.

It’s been an incredible few years for Lauren Lane, an LA-based artist who worked her way up the New York house scene.  She released her debut EP Cool Kids and the title track “Cool Kids” was the best selling track on Saved Records in 2014. She released her next EP Diary of a Madwoman in early 2016. Mixmag named her “a shining American techno pioneer in 2016” in their feature on “Eight Artists Taking American Dance Music To The Next Level in 2016” as well as “10 most unforgettable moments of BPM 2016 and Pulse Radio’s “5 Breakout Stars of The BPM Festival 2016”. She’s become a regular on the festival circuit, taking on Coachella, The BPM Festival, Burning Man, TomorrowWorld as well as regular club spots around Ibiza, Europe, South and North America. Lauren Lane will be joining us on May 7th at Shady Park in Tempe as part of our new daytime Summer series, ‘Blume’. It’s dedicated to bringing you the Sunday Funday laidback vibe you crave. Keep your eyes peeled for future ‘Blume’ announcements and grab tickets to Lauren Lane here.
Connect with Lauren Lane: Facebook | Soundcloud