This Spring we’re taking over Big Surf Waterpark for another edition of Wet Electric and this year’s lineup is bigger than ever before. You’ll be able to enjoy zip lines, water slides, a wave pool, two stages and more. Adventure Club will be headlining the festivities alongside Bro Safari, Crizzly, Dr. Fresch, Loud Luxury and Sevenn. The RBDeep Takeover, specializing in both deep waves and deep beats, will host J. Philip, SNBRN, Codes, Lavelle Dupree, Shift K3y, Worthy b2b Option4. Get to know the artist on the Wet Electric 2018 lineup below. 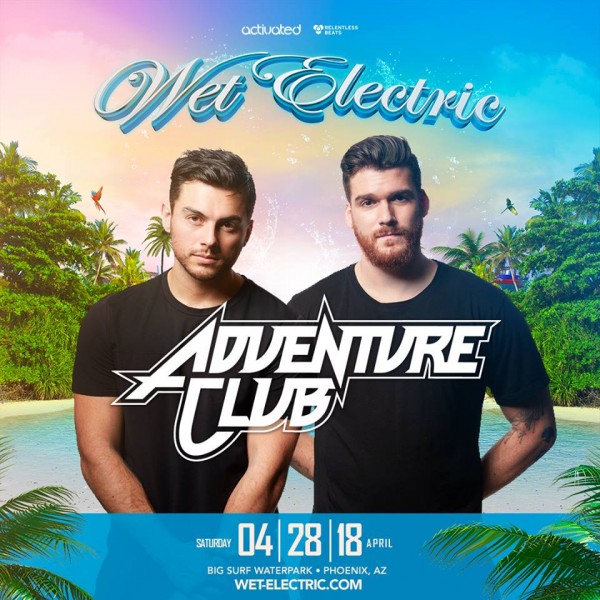 With their melodic brand of dubstep-infused jams, Adventure Club has enjoyed a steep ascension since their 2009 debut. The duo first formed while attending high school in Montreal as a hardcore pop-punk band, but later discovered their passion was in electronic dance music. Catchy, big-drop remixes for “Crave You” by Flight Facilities and “Youth” by Foxes, plus a monster collab with Krewella, “Rise & Fall,” set the stage for the Canadian duo’s breakout. After their debut EP, Calling All Heroes, earned 10 million+ Spotify streams, the duo began to grace the stages at major festivals like EDC, Ultra, Coachella, Lollapalooza, and Bonnaroo. In December of 2016 the duo released their first full-length album, Red // Blue that features a masterful clashing of styles from the raging red of their bass-heavy bangers, and the blissful blue of their chillstep melodies. 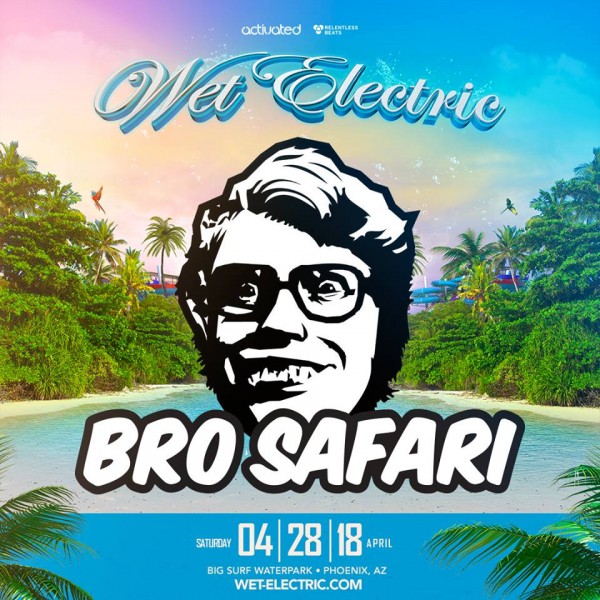 Producer Nicholas Weiller, known to millions as Bro Safari, continues to brand the industry with a searing impression of his hip-hop influenced trap and huge moombahton mixes that have earned him his stripes alongside some of electronic music’s biggest and best. As prolific on the live circuit as he is in the studio, Bro Safari’s tour calendar has spanned the globe’s most notable music events, with appearances’ at Lollapalooza, ULTRA Music Festival, Electric Forest, TomorrowWorld, Mysteryland, Electric Zoo, EDC New York and many more, it’s no surprise that radio mixes for the likes of BBC Radio 1’s Diplo & Friends and Annie Nightingale have been in demand for the airwaves, taking his sound to a global audience of millions. 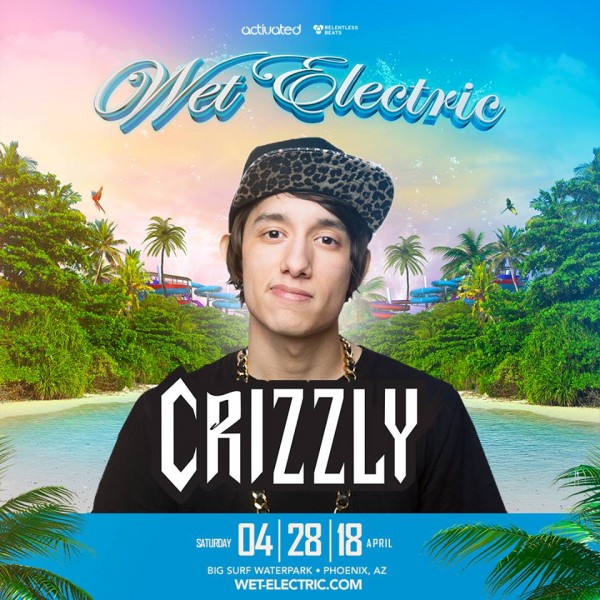 Crizzly is a one of a kind DJ and producer as he creates his own brand combining elements of hip-hop and dubstep that he likes to call “crunkstep.” Music became a part of Chris Lee “Crizzly” Marshall’s life at a very young age. As he recalls, he discovered it as a child-insisting on making his kindergarten class listen to the Space Jam soundtrack during naptime-but he didn’t formally embrace it until high school. He began producing music at age 19 and hasn’t stopped since. Anytime he hits the stage, Crizzly has no choice but to go hard. Channeling hyperactive energy and uncontainable swagger, the San Antonio artist ignites crowds with an intoxicating, infectious, and inimitable blend of sounds. 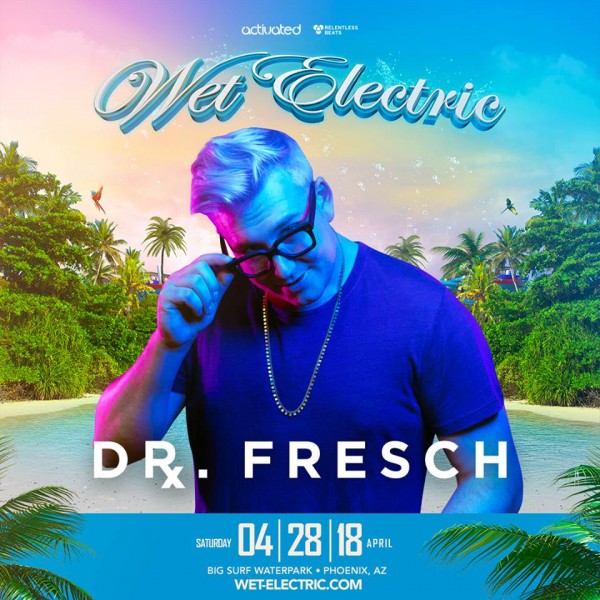 Dr. Fresch is a Los Angeles based producer dealing your prescriptions in the form of bouncy, bass-ridden beats. Fresch has been involved in music since he was 7-years-old, taking classical piano lessons. In 2007, Fresch started getting into dance music, listening to the likes of  Justice, Daft Punk, MSTRKRFT, and The Bloody Beetroots. After moving to Los Angeles in 2009, Tony Fresch started to make a name for himself as one of the most distinguished up and coming DJs and producers in the LA EDM scene. In 2012, Tony launched the Dr. Fresch brand with remixes on Dim Mak Records, Big Mamas House Records, and Prep School Recordings. After securing a position as a resident DJ for Steve Aoki’s Dim Mak Records in 2013, he won Insomniac’s Discovery Project Contest and was chosen to perform at Nocturnal Wonderland. Since then he has gone on to play some of the biggest festivals in the world, furthering his reputation for deep, dirty, ghetto house beats. 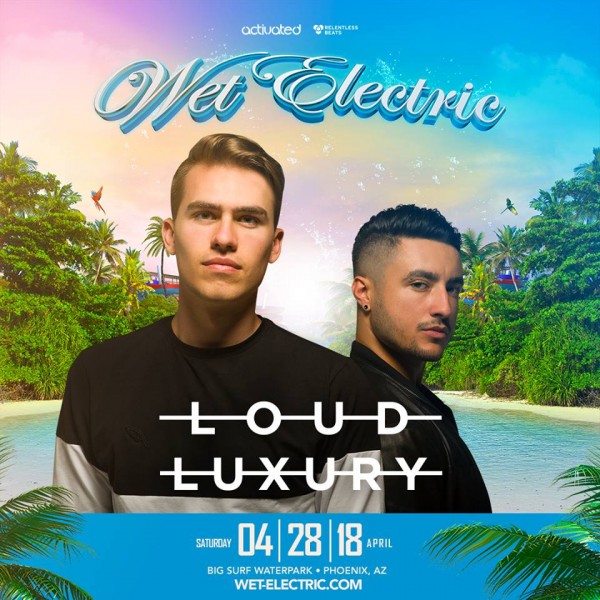 University friends Andrew Fedyk & Joe Depace, better known as Loud Luxury, have been creating quite a stir in the dance music scene as of late. With just a handful of releases under their belt, the duo has attracted the attention of tastemakers such as Oliver Heldens, SNBRN, and Gorgon City to name a few. They’re sound is something between a subdued Vanic and a mild Louis The Child. It’s vibey, it’s chill, it’s always a melodic masterpiece. Recently, the duo was featured on the cover of hype Spotify playlist “New Dance Beats” and their highlighted tracks are some of the most engaging songs. The two have played a myriad of festivals across the continent, all conjuring the same emotion, pure bliss. They are consistently praised for their sexy vibes and catchy beats. 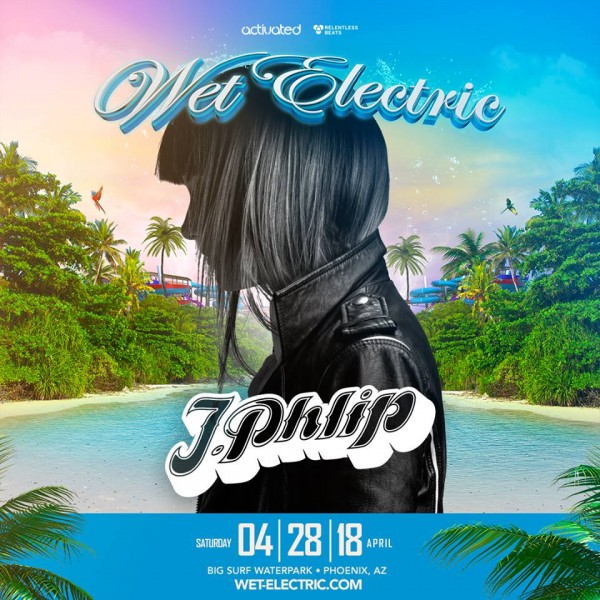 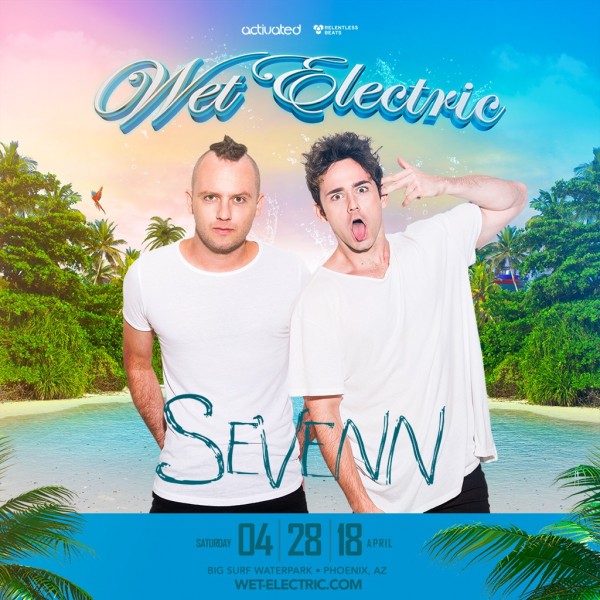 Sevenn is an American DJ duo that has been captivating the dance world with their powerful sound. Brother Sean and Kevin Brauer hit the spotlight in 2016 when their huge release “BYOB” with ALOK topped charts worldwide. Riding the wave of that success the duo made another huge collaboration in 2017 with Tiesto in the form of “BOOM.” The guys joined Tiësto on stage at Ultra last year to premiere the collaboration, which has since seen major support and remixes with the likes of Gucci Mane! In just a couple short years the duo has proven their worth and become a force in the EDM scene 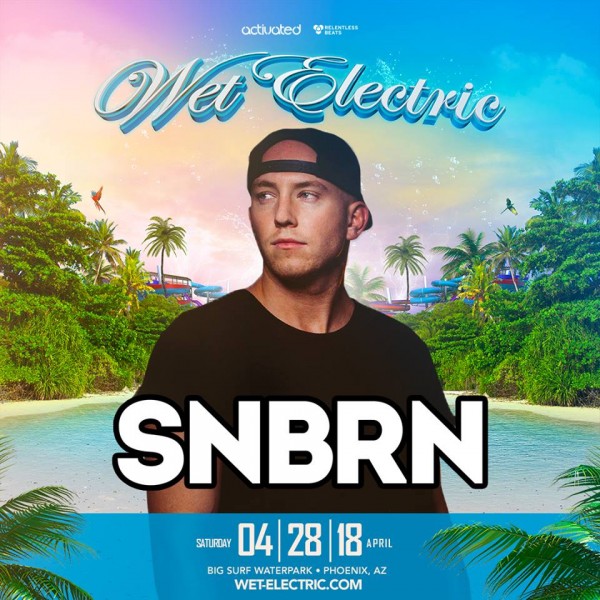 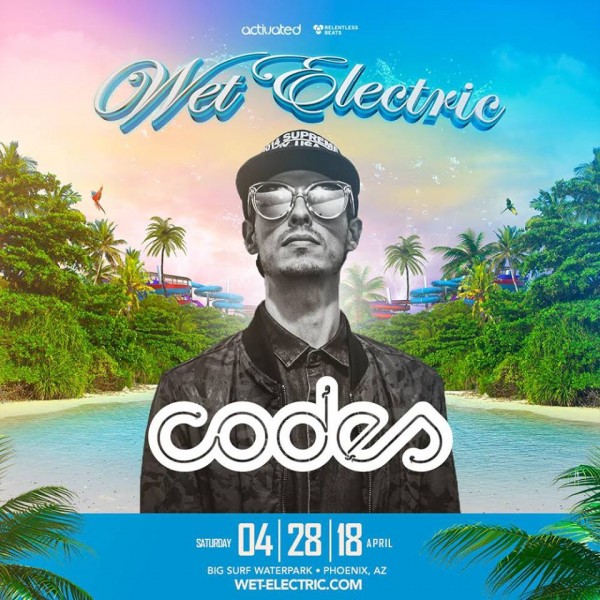 New York-based DJ and producer Codes knows how to keep a party going. His funky House tracks have captivated audiences across the world at massive events like HARD Summer, Valtifest in Amsterdam, and Camp Bisco among others. Staying true to his eclectic sound, Codes just released his latest EP, Bumps & Boom Bapps, featuring 10 remix tracks with an impressive crew of A-list producers and tastemakers. The EP includes cuts from Crave, Golf Clap, Stranger, Aylen, Grensta, Smalltown DJs, Devon James & Will OB, CLB, and Karuva. Each remix builds off the original release while traversing a number of various different genres. Check it out below. 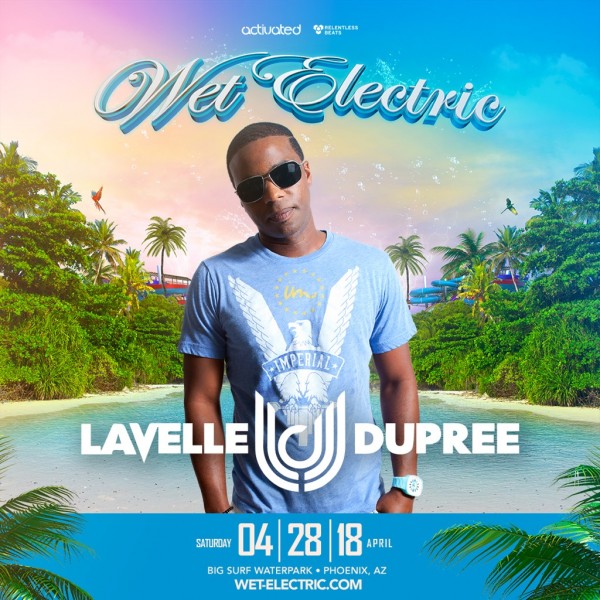 voted San Diego’s best EDM DJ, Lavelle Dupree has been blowing up dance floors for over 25 years. Inspired by the legendary Donald Glaude, Lavelle has developed a deep appreciation and love for his craft. A self-taught DJ, his musical talents have grown into powerhouse performances that have lit up the main stages in major venues around the globe. His distinct ear for matching the perfect combination of songs and beats keeps the crowd entertained and begging him for more. He’s released music under Push On Music, Enormous Tunes, Sirup Music, System Recordings, SO GOOD Music, and held residencies at Vessel in San Francisco, the Liquid Pool Lounge in Las Vegas, and Libation in New York. Lavelle continues to bring charisma and energy to every set he plays whether solo or with Scooter and Lavelle. In a nutshell, Lavelle’s performances are a body-moving experience not to be missed. 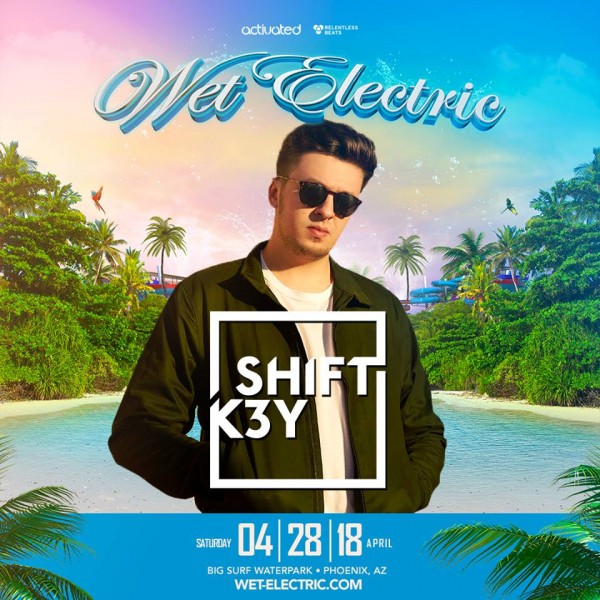 Hailing all the way from London, Lewis Shay Jankel, better known as Shift K3Y, has been breakin’ hearts with his feel-good tracks since the release of his debut EP, Step in the City, in 2011. His career truly launched in 2012 when he caught the attention of Borgore, who featured his single, “Wiggle with It” exclusively on the label’s Buygore Allstars Vol. 1 Compilation. His 2014 single “Touch,” is referred to as his breakthrough single, as it peaked at Number 3 on the UK Singles Chart. Shortly after, he released “I Know,” which reached Number 5 on the Chart. Since then, we’ve received several singles and EPs from Shift K3Y, making it clear he’s not slowing down anytime soon. Be sure to keep your eye on this one – the British DJ and producer is hard to keep up with! 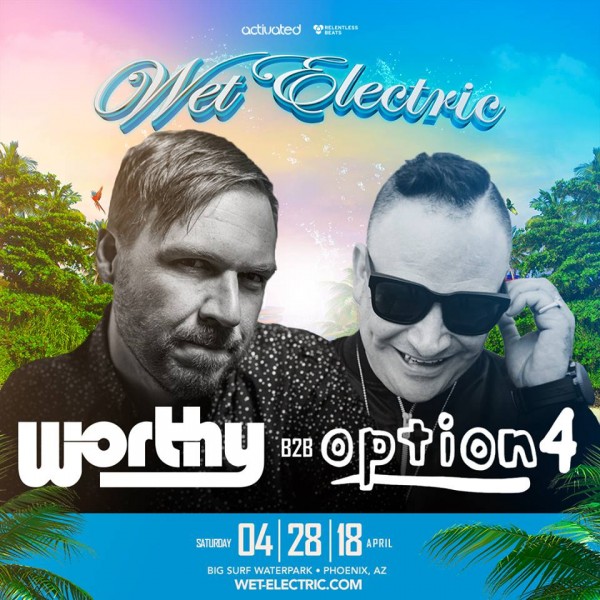 With over 10 years of experience in the industry, Worthy is a stand-out DJ with an innovative mind and unparalleled sound. Worthy moved to the West Coast in 2001 to pursue his music career. He teamed up with Claude Von Stroke, Justin Martin and brother Christian Martin in San Fransisco and became one of the founding father of the Dirtybird party. Worthy’s breakout track, Irst Te, was released on the Dirtybird label in 2007 and ten years later he’s still rockin’ the sound.

option4 is a house music warrior. With releases on Ninja Tune, Nurvous, Club Sweat and more besides, his music packs a significantly bigger punch than your average house cut, incorporating tribal rhythms, intricate melodies and fierce low-end to produce a style that is never short of mesmerizing. Recently named by US legend MK as one of his producers to watch for the year ahead, tracks like “Vibe On” and “Rise Of The Cat Lord” have made an impression in all the right quarters. 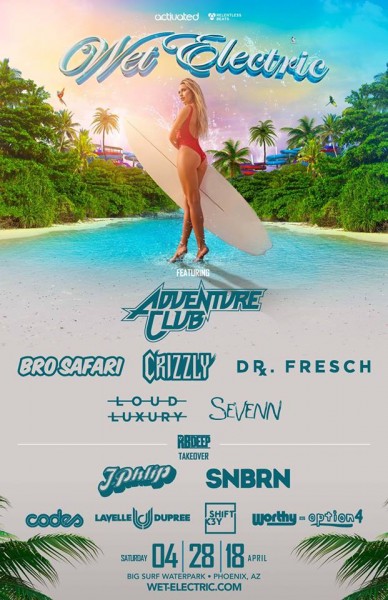 This lineup, simply put, is overflowing with top-notch talent. Whether you’re dancing and splashing at the main stage, or riding the waves for the RBDeep Takeover, you’re guaranteed a good time. Get info and tickets here.