He’s a man who’s gone by many names, and to some of his fans, he’s simply known as “Father”—a moniker he’s undoubtedly earned. That’s because UMEK, a DJ who’s been on the scene since ‘93, is essentially the father of rave culture in his home country of Slovenia. He’s also got a hell of a rap sheet, boasting sets at Tomorrowland and Electric Daisy Carnival Las Vegas, earning multiple music awards, and playing over 100 shows all over the world on an annual basis.

Simply put, the man is a machine, and over two decades later, it seems he’s only just getting started. That’s why I was incredibly honored to snag an interview with the man himself just a few short days before playing Phoenix Lights 2018. Check out our conversation below: 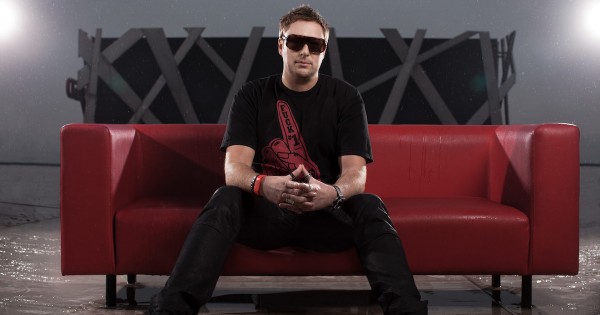 You have a unique techno sound. What’s your creative process like?

That changes all the time, mostly depending on the genre I’m producing. And on top of that, I get easily bored with everything, so I keep myself on toes by changing the routine and tools I’m using quite frequently. Now that I’m back into harder techno sound, I’m paying a lot of attention to finding the perfect kick. For some time, I’ve struggled to develop the sound that I wanted. I have had a perfect idea of that, but the materialization of it proved itself to be quite a challenge. I know that might sound a bit weird after all these years producing music, but every artist has an idea of the perfect sound that he wants to produce. I was working on it for almost two years and recently I finally pimped it up to the point it’s almost what I want it to be.

So, I get in the studio most of the days when I’m not touring, I start by listening to different bass and kick sounds, and I try to produce something special. A couple of times lately I’ve got so hooked on a particular melody while watching TV-series that I’ve stormed into my basement studio, turned on the computer and synth and just started fiddling with knobs until something good came out. But yes, working on sample-based tech-house track or techno production from original sounds is not the same, so I have to adapt my routine a bit to what I do.

I’m in love with your recent releases “Certain Trace” and “Deja Vu.” What inspired these tracks?

Some unexpected flashbacks on a couple of productions I’ve created years ago. I’ve released a couple of EP at Tronic in the past. We’ve been friends with Christian Smith, the owner of Tronic label, for years and we’ve talked for some time about doing something for him, but I didn’t really plan this EP. It just emerged out of my everyday studio sessions. At some point, after I’ve laid down the beat and rhythm section, I’ve started playing with Arpeggiator on the Synthesizer and it came to me, “This sounds something like Tronic.” I finished the track and sent it over to Christian who agreed this would fit perfectly into their sound. To be precise, he called me and said, “This sounds hard as nails. I love it and I want to release it!” I’ve made another two tracks, he picked the one he liked more, and we’ve scheduled the release date. I always produce music with a thought of the energy it would trigger on the dancefloor.

I’ve tested it a couple of times at my gigs, it needed just some minor adjustments, but it worked great since the first play. As in most of the music I produce these days, I’ve used a very hard kick, and yes, it’s a production that fits perfectly into the peak of the night set. Maybe the track doesn’t even sound that hard, but the rhythm section is really banging. I’ve titled the first one “Deja Vu” as it reminded me of one of my older tracks. It’s got some elements in the rhythm section and snares similar to “Flang-O-Matic.” The name is a bit overused, but in this case, it fits perfectly. The similar goes for “Certain Trace,” which reminds me of some tracks I’ve produced years ago.

Your sound has evolved over the years, and recently, you’ve gone back to your darker techno roots. What inspired your change in sound?

The evolution and changes in my sound are conditioned with two things: the main reason for them is that (1) I get bored with everything really fast, and I need little changes in my working process all the time, and (2) I buy new software and plug-ins all the time; I stop using samples, and after awhile, I get back to them when I discover some really good ones. Then I don’t use any hardware at all for years. And then after awhile, a nice machine comes out, and it gets my attention.

I also change the way of my routine: I sometimes build a track around a nice sample, hook or a melody. And on other occasions, I start the track by building a strong base first, and then I add other elements to it. The other reason for moving between subgenres is the music that is available to me. I am looking for new music all the time and I buy what I like. It doesn’t even need to be techno. For example, I have a big collection of house and classic rave tunes on vinyl that I rarely play. So, a couple of years ago I noticed that I’m buying 90% of tech-house as there was not much decent techno production available, and that took me into that direction as a DJ and producer. In the last couple of months, with the resurrection of techno, I’ve leaned to the darker side of my sound again. But that comes totally natural, I don’t plan it, and I don’t decide in a way, “Now I’ll stop producing tech-house and I’ll start working on techno tunes from Monday on.”

You have so many projects going on between producing, playing shows all over the world, running multiple record labels, and hosting your “Behind the Iron Curtain” radio show. Now you’re venturing into blockchain technology with Viberate, which has made waves in European tech and the music industry in general. What sparked your interest in tech?

I was always interested in technologies, and I’m a very future-oriented person, so getting involved in blockchain technology was my natural move–especially as we’re doing major things for the music industry in which we’ve operated in since we were teenagers. We’ve got some serious funding for Viberate (after initial seeding money, we gathered over $10 million in just over five minutes), so that’s our main focus now, and we’re expected to show results according to our business plan. Sadly, our team is small and so involved in this right now, we’ve needed to do some rationalizations and had to cut–or at least put on hold–some of our projects. So we’ve quit the Behind The Iron curtain show after 328 episodes, and my label 1605 is also on hold right now.

I saw that you’ve been playing under your early aliases. What are the major differences in your sets when you play under the Zeta Reticula or Alba Patera monikers versus UMEK?

A couple of years ago, when tech-house, deep, and minimal started fading on account of stronger techno sound again, I revived Alba Patera only as a studio project, I don’t perform under this alias. Alba might sound a bit different than Umek when I revived it after 15 years or so, but I’ve actually moved to that sound as Umek, and there’s no need for it anymore.

On the other hand, I’ve fully revived Zeta Reticula as my creative love child. I release music regularly under that moniker, and I do some special performances from time to time. Zeta Reticula is my personal outlet for expressing melodic frustrations through producing electro. My techno sound is quite energetic, dark, hard, and rough–I intentionally avoid leaning too much on melodies when I produce techno, while the principles of electro sounds are different, and I can build my Zeta Reticula productions around melodies without sounding cheesy. The electro community is very small compared to house, techno, and other dominating genres, but I actually just got a request to play as a Zeta Reticula at the club Nitsa in Barcelona, where I’ve performed many times as Umek. Now they want to host me with this side project, so this might put things on a bit bigger level. Let’s see what happens.

We can’t wait to have you at Phoenix Lights this weekend! What can the fans expect from you?

Most importantly: full-on energy techno! Don’t get distracted by Zeta Reticula and electro as we were discussing above. That has almost nothing to do with my mainline. As Umek, I play energetic techno to dance to and have a great time on the dancefloor. The main pillars of my set are my own productions and remixes, lots of unreleased material, and edits you can only hear in my sets. But of course, I also play music from other artists that produce similar techno music that is dark, hard, and sometimes a bit rough on the edges. If I feel like it, I also mix in a classic or two at the end of the set or an alternative version of some of my greatest hits. In any case: wear comfortable shoes and hydrate well as we’re going to break some sweat on the dancefloor!

UMEK will be bringing his dark, bass-heavy sound to Phoenix Lights this Sunday, April 8, with a set that’s guaranteed to be unmissable. If you haven’t already, be sure to grab your tickets here.