The small town Mystic born Nate Rathbun has been gracing the scene with his stunning, melancholic music since 2008. When he was just 17, he started his career with “Rise & Shine” on Ferry Corsten’s label, Flashover Recordings. From there, Audien developed a foundation of sound that evolved into the innovative, audiovisual trance we hear today. Rathburn released singles and remixes for Armada, Spinnin’ Records, and Anjunabeats, catching the attention of the likes of Armin Van Buuren, Above & Beyond, Hardwell, and so much more. His tracks began to sprout on some huge compilations including Tiesto’s Club Life and Above & Beyond’s Trance Around The World. And as he progressed through the scene, so did his sound and production. With tracks like “Wayfarer” and his remix for Bastille’s “Pompeii,” Audien knows how to tap the heartstrings of fans and evoke emotive reactions that tell brilliant stories. I got a chance to sit down with Audien after his set at Crush AZ where we discussed his latest album, his happy hardcore days, and his latest crush. Check it out below! 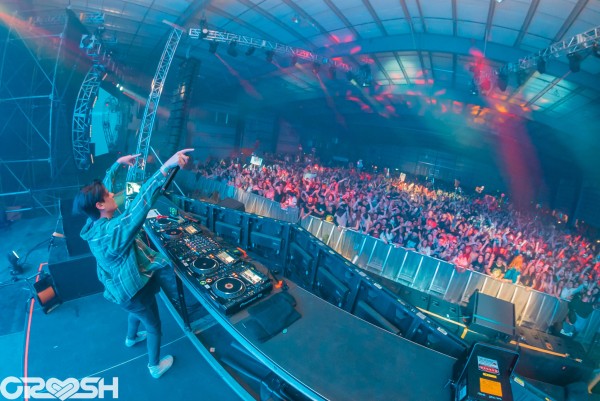 Your highly anticipated album “Escapism” debuted last November. It explores deep themes like grief, heartbreak, love, and freedom. What was it like working on this album?

You know, honestly, it was something I just really had to do. I had to do an album. The next album is going to be even better. It’s just that I really wanted to squeeze out the last little bit of that sound I was doing. And then I’m kind of evolving it this year and bringing it into a new face. It was something I had to do. The universe said I had to do that.

I love that.  How important is for you to tell a story with your music?

It’s very important. I think its the only thing you should do with music really is tell a story. Otherwise, it’s just sound and noise. It’s what it all means that really resonates with you. It stays with you.

What story do you think you’re telling?

If I was to bunch all of my music, the story would be general positivity and living free, you know? Just not thinking of anything that bothers you. Just good vibes overall.

What’s one thing you can tell me about your process of making music that no one else may know?

Honestly, my process is like this: a lot of artists make music all the time, I don’t. I make music once in awhile and it’s only when I’m really inspired. Like I always say creative energy takes time to regenerate. Sometimes it takes a month to feel inspired enough to make a song. Because I don’t want to make 17 not good songs and throw them all away. I’d rather build up the ideas and energy and excitement then just lay it all into one song. So that’s why it takes me a little bit of time. That’s my process.

When was the moment your music evolved from those happy hardcore days to the raw and elegant trance it is today?

Wow, that’s great. So, when I started making music I was making only happy hardcore. Nobody knows about it. Very few people know about that about me.

Yeah, I heard it tonight!

*Laughs * I mean, I still play it, because I love it. It’s honestly so untapped I think that once people discover it more people are going to realize how great and melodic and just awesome happy hardcore is. It’s really good music for festivals and what not. But, I realized the music I was making wasn’t really playable and palatable where I was living, in the United States. So, I wanted to take the essence of what was good about happy hardcore and bring it into like a progressive 128 BPM realm. I wanted to sort of blend those two genres and that’s what I think makes my sound maybe a little different. If you sped up some of my trance and progressive stuff up to 170 BPM, it’d be happy hard core.

We’re still at the beginning of the year here, what are your plans for 2020?

2020, I’m just releasing a bunch of singles and playing a lot of great shows. I’m really putting a lot of energy into the singles I do put out, because I want them all to be very, very special. They’re all going to be pretty vocal. I plan to do another song with Anjunabeats this year. That’s kind of like my family of sorts.

Crush Arizona is only the second stop on your Spring Tour! What are you most looking forward to on this tour?

You know really, this was actually one of the shows I was looking forward to the most. It’s a lot of mix of small shows and big shows. I do look forward to every show equally because they are all so unique in their own way. I get really excited about ten people and 10,000 people the same way. It’s just what I do. The spring tour is essentially me bunching all my spring shows into a tour of sorts.

I know all those fans in the crowd and myself are crushin’ pretty hard after that set. Keeping with the theme, what are YOU crushin’ on lately?

I am crushin’ on… well, I’m single so I’m not crushing’ on anyone.

Anything? I want to visit beautiful places this year in the United States and not for shows. I want to go on my free time to places like Montana or Idaho, wherever there’s beautiful mountains. Just places I haven’t been. I feel like I’ve been in all these cities, but I’ve never been anywhere really truly beautiful and I think that’ll inspire me a lot. Inspire the music.

Be on the lookout for new singles from Audien this year to reminisce the night he made Arizona fall head over heals with his sound.