And we’re back with another week of Mix Fix! Do you miss live sets? How about a Louis the Child set? This set from their “Here For Now” Tour lies in a special place in the heart of Chicago, where they are originally from. Let’s relive this experience!

Louis the Child introduces the crowd with the song “Here For Now” in a deeper key, dropping into a vibrant beat. As the introduction plays, they preview the beginning of “It’s Strange” which gets the crowd very excited! They then combine the beat and “It’s Strange” together, making a beautiful remix.

More parts from this set to highlight include the song “Slow Down” at 24:55, with the marimba playing in the background. Another part is at 46:05, where they play a fan favorite, “Weekend”, with an intense remix.

The ending is what truly made me realize how much I miss live shows. As they’re playing “Here For Now” on the piano, Louis the Child speaks to the crowd, thanking their fans for the vast amount of support they have for them. Then they shout out their hometown, Chicago, along with shouting out the 7 people who attended their first show ever. They also give great advice by talking about the idea of their album, “Here For Now” where it’s about recognizing the impermanence of everyone and here for one “Little Thing”, which I believe they were previewing the song “Little Things”. After their speech, they pretend to end their show, but then they come back out with the songs “Love Is Alive” and “Better Not”.

Honestly, this set gave me flashbacks to when I’ve seen Louis the Child live. They’re super fun to see, and will always have a special place in my heart.

About Louis the Child 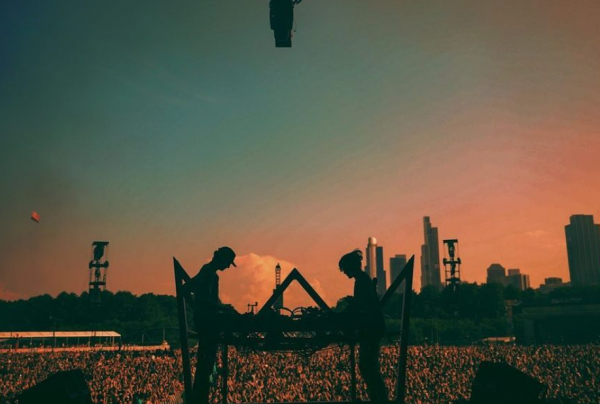 The duo, Frederic Kennett and Robby Hauldren, was born and raised in North Shore, Chicago, Illinois. Although they attended the same high school, they didn’t meet until attending a Madeon concert in 2012. They played small venues, and the duo became popular with their song “It’s Strange”. Louis the Child carries a unique sound that will instantly change your mood.