MDBP2016: Baauer’s Creating a Collage of Musical Influence That Spans Far Past Harlem

The first wave of artist have been announced for Mad Decent Block Party and we have many more surprises still to follow. Already confirmed for this year’s event are artists like fan favorites Flosstradamus and Diplo, hip-hop producers FKi 1st and Lil Dicky, as well as music from all over the spectrum including the likes of AlunaGeorge, Justin Martin, Le Youth, Jackal and Tchami. One artist who’s return we have all been anxiously awaiting is bass master and rage extraordinaire, Baauer. 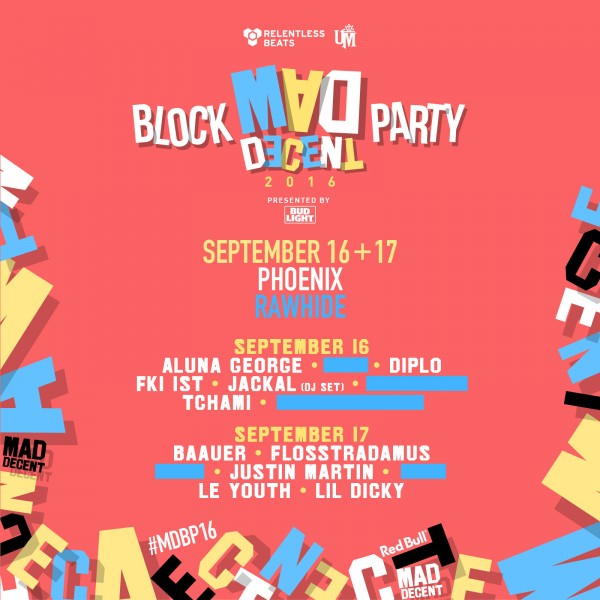 Baauer was born near Philadelphia, Pennsylvania, but grew up moving around Europe. He returned to the U.S. for high school, but then decided to go back to Europe and study at The American School in London. Once again, he moved back to the United States to continue his studies while living in Harlem, New York. Baauer started producing music at a young age of 12 years old and now travels the world searching for sounds to manipulate into new tunes.

“It’s kind of like making a collage. That’s how I think of making music, like making a collage of different stuff.” Baauer has remixed songs by a wide mixture of artists including Nero, No Doubt, and Disclosure. While producing music with artists like RL Grime and Boys Noize, he has gained great traction in the electronic music scene. He has even produced multiple tracks that feature Fetty Wap and M.I.A, which further demonstrate the variation of sounds he portrays.

Ever since his single “Harlem Shake” was dropped in 2012, Baauer has been a leading artist in the trap and bass scene. When the song came out, thousands of combinations of people created videos of themselves illustrating their version of the “Harlem Shake.” Multiple companies and organizations filmed hilarious clips of themselves doing the most random dances moves in their workplace to the track.

“Harlem Shake” still remains Baauer’s number one selling track. As a matter of fact, Mad Decent produced the single and it was at the top of the Billboard Hot 100 for 5 weeks in a row. It made the year-end charts in Australia, Belgium, Canada, Italy, the United Kingdom, and the United States.

Among his shows listed above will be his stop here in Phoenix on Day 2 of Mad Decent Block Party, September 17th. This celebration is bound to be full of absolute madness so prepare yourself and purchase your tickets to this year’s event while the prices are still low!