“Adrenaline” is officially the first song added to the FIFA 2017 soundtrack, which was announced on Sept. 2, the same day Zedd officially released the song on SoundCloud, which was also his 27th birthday (which he spent performing in Vegas). 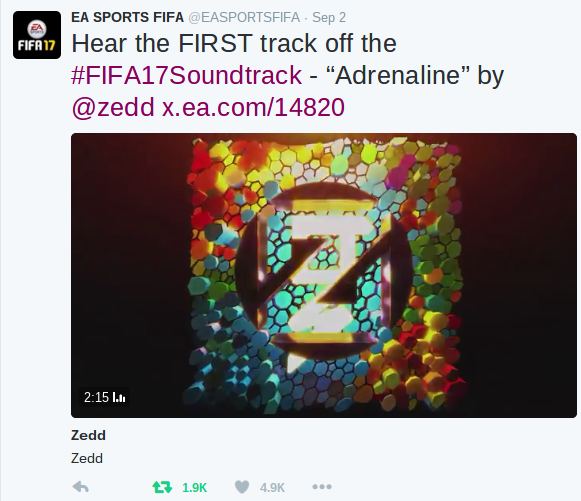 This track is proof that good things come in small packages. In this 2:47 song, there’s just one drop. ONE. DROP. The fast and fleeting track full of pure energy is enough to give Vegas night owls and video gamers alike an adrenaline rush, no problem.

The electro-house hit begins with a light, almost tropical sound until it’s quickly broken with deep horns and sirens gradually leading into a familar Zedd-esque builder that drops into a high intensity beat that brings the song to its finish.

Prior to its release, Zedd leaked multiple videos of his hilarious self teasing fans with glimpses of the song as he’s been performing it during his sets for quite sometime.

Zedd crafted this song along with the L.A. based brothers of Grey, who are known for their official remixes of Kaskade and Jack U along with their first collab with Zedd and Hailee Steinfield, “Starving,” that was released in mid-July. Although Zedd’s SoundCloud doesn’t give Grey credit for this track, Zedd released a statement saying he is signed to a label with a complicated SoundCloud contract, but ensures that the song is a true collaboration and the duo deserves praise.

Zedd has said he has no plans of releasing an album this year, but who knows… maybe his pumping adrenaline can at least pump out a few more stellar singles.