From Basements to Record of The Year, Dance Music Holds It’s Own at The Grammys

The first-ever Grammy Award Show held in 1959 saw nominees like Elvis Presley, Frank Sinatra, and  Ella Fitzgerald who has been dubbed “The First Lady of Song” (to put things in perspective). At that time, pop music was simply just pop music and dance music was basically nonexistent. It took a lot of creativity, bravery, and open-mindedness, but sure enough nearly 4 decades later Electronic Dance Music got a spot at what is without a doubt, the worlds utmost honorable music award show.

Past nominees and winners include Diplo (5-time nominee) Skrillex ( 7-time winner and  2-time nominee) and of course Daft Punk, who hails over us with 7 Grammys and 9 nominations since 1998.

To understand the magnitude of the situation, you first need to know that EDM hasn’t always been on the radio, it hasn’t always been played at High School Proms, and it most certainly hasn’t always been widely accepted as an “appropriate” genre of music. It once was quarantined by the four walls of an underground venue, only appreciated by those who relished iits’s unconventional manner. Per progressive acts of Pop, Hip-Hop, and the blending in of “familiar” characteristics, dance music is now something that is loved and known by the masses.  You know how we know? Because dance music has it’s very own category. What a time to be alive, huh? 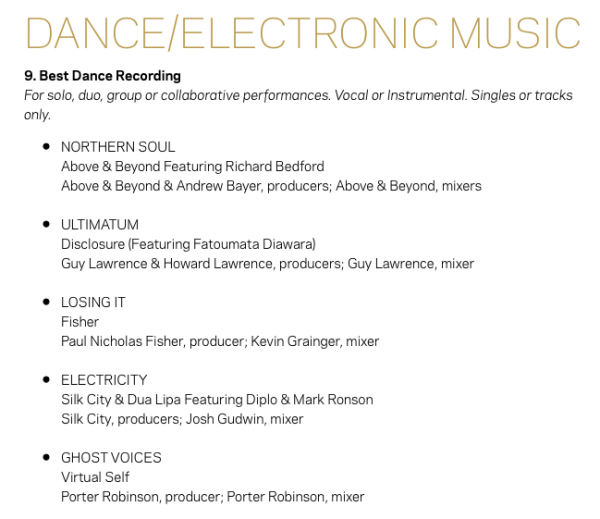 Beyond having our very own section to shine in, we’ve got representation everywhere.  Zedd, leading the pack with nominations for Record of the Year, Song of the Year, and Best Pop Duo/Group Performance is something I’d never thought I’d see. His crossover hit “The Middle” may very well get him to the top (with now 4 Grammys). Other dance music nominees are Above & Beyond with “Northern Soul,” Disclosure with “Ultimatum,” Fisher’s wildly popular track “Losing It” and my personal favorite, Virtual Self with “Ghost Voices.” Well done boys. 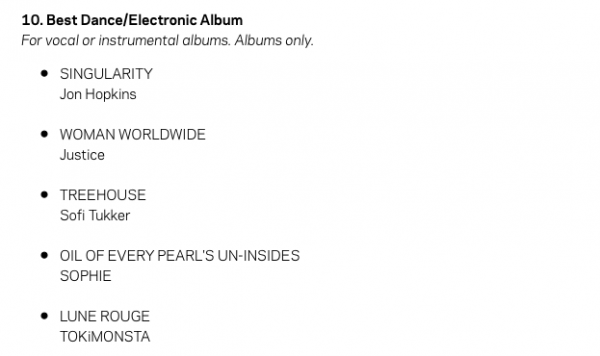 Happy for our friends in other categories and genres, it’s no surprise that Post Malone is splashed all over the scoreboard. Whether he gets Album of The Year, Record of the Year,  or Best Solo Performance, Posty is deserving mosty. Cardi is up for 5 different nominations and Drake follows with 4. The talent is unparalleled this year; we can’t to see those gold awards passed out. Tune in February 10 to see it all go down.