Get to Know Your Dusk 2019 Daily Lineups!

Dusk Music Festival first came to life in 2016. Since it’s creation, the festival has brought internationally renowned artist to Tucson such as RL Grime, Big Sean, Dillon Francis, A-Trak, Big Gigantic, Louis The Child and more. In addition to music, Dusk highlights the best food and art in Tucson, creating an immersive festival experience. Last year the festival moved downtown to Armory Park and we’re excited to return this November for the fourth rendition. Check out the day by day lineups below! 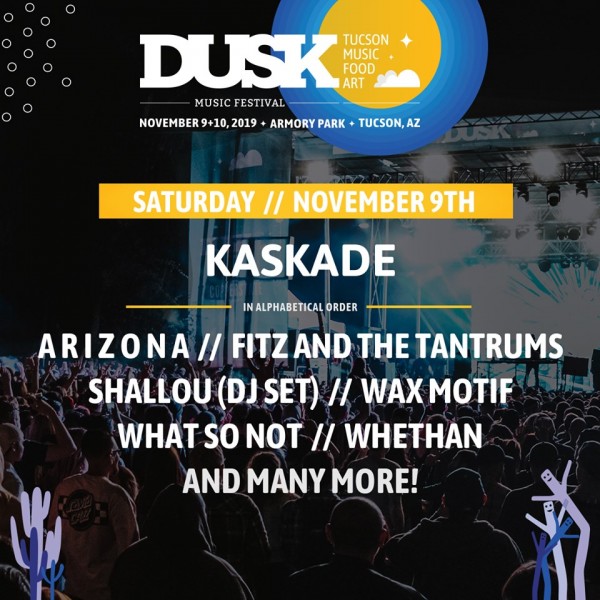 Headlining Saturday night, Kaskade is no stranger to Arizona. He brings massive crowds and even bigger vibes. Born Ryan Raddon, he’s been one of the most in-demand artists in the electronic scene for over a decade. His talent is often unparalleled and his extensive discography and list of accomplishments (which includes six Grammy nominations and two-time title of DJ of the Year) speaks for itself. He’s one of the hardest working producers in the biz, performing nonstop at festival and clubs and releasing music on a seemingly non-stop basis, but we’re not complaining! We love everything Kaskade does from the emotive ballads to the big room bangers.

A R I Z O N A is an electropop rock band from New Jersey that never fails to brighten a stage. They began making music together in 2015 and the band’s debut studio album, GALLERY, was released in May 2017 followed by a headlining tour that Fall. A R I Z O N A is no stranger to the festival scene. They’ve played South by Southwest, the Governors Ball Music Festival, Firefly Music Festival, and Lollapalooza to name a few and have worked with DJs like Don Diablo on “Take Her Place.”

Indie Pop band Fitz and The Tantrums formed in 2008. Consisting of six talented musicians, F&TT gives you that jam band feel. Their debut studio album, Pickin’ Up the Pieces, was released in August 2010 on Dangerbird Records to much acclaim. It reached No. 1 on the Billboard Heatseekers chart and catapulted the band’s popularity. You likely know them from their massive hit “HandClap,” but the whole discography speaks to their brilliance.

Joe Boston, professionally known as Shallou, is a Los Angeles based producer and singer. His style is ambient, and his house melodies and soulful vocals have carved a niche in the Indie and Electronic music scenes. His debut EP, All Becomes Okay, was released in May 2017, followed by EP Souls in April 2018, both through his own label, Sleeptalker.

Australian producer Wax Motif, born Danny Chien, has risen above a sea of talent in the house music industry and is riding the wave he’s made for himself through his unique sound and talent. There really isn’t anyone like him, and in an ocean of talented producers, this makes him attractive to bigger fish taking notice. In early August, Wax Motif announced the launch of his label, Divided Souls Records, and then on August 28, he dropped the first song released by the label, “Divided Souls.”

Aussie producer Chris Emerson, better known as What So Not, came onto the scene in 2010 as part of a duo, Flume. They’ve since split and gone their own ways, and What So Not has been thriving solo for the past few years. Originating in Sydney, Australia, What So Not has been an influence in the industry even before the breakout of his solo career. He’s best known for his hits such as “Gemini,” “Jaguar,” “High You Are,” and “Tell Me.”

Whethan has becoming a staple in the indie/electro-pop spectrum during his short career thus far. Amassing hundreds of millions of streams, it’s hard to deny the young producers talent. He’s worked with renowned artists Louis The Child, Flux Pavilion, and Slushii, just to name a few. Last year he released his Life of a Wallflower Vol 1. EP, leaving fans in anticipation for Volume 2. Expect to hear more from this rising star in coming years. 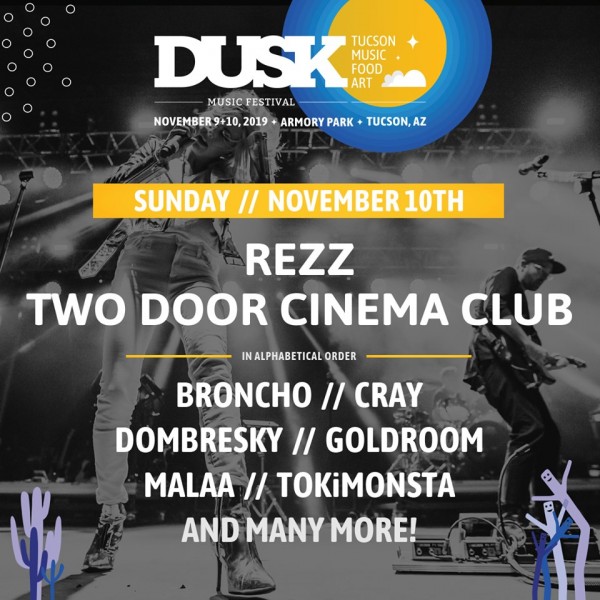 Isabelle Rezazadeh, more simply known as REZZ, has dominated the scene since her start in 2015. The Ukraine born artist, Canadian raised producer has a unique sound that is distinctly her own. She released her debut EP, Insurrection in 2015 through OWSLA’s sub-label Nest HQ. In 2016, she signed with Deadmau5’s record label Mau5trap, and released follow-ups The Silence is Deafening and Something Wrong Here. Her debut studio album, Mass Manipulation, followed by Certain Kind of Magic, came in 2018. It’s apparent she’s one of the hardest working artists in the industry, further proven by her huge “cult” following. Not only is her music one of a kind, her spiral goggles and devilish visuals make her shows a must-see.

Co-headlining on Sunday is Two Door Cinema Club. Though this group is an indie rock band, they have worked alongside electronic artists, notably when talented DJ Madeon produced their track “Changing of the Seasons” in 2013. A beautiful blend of acoustic and electronic, the single was even called “the hottest record in the world” by BBC Radio 1’s Zane Lowe. More recently the group released False Alarm, their fourth studio album that’s already surpassed tens of millions of streams on Spotify alone.

BRONCHO is an American indie rock band based in Norman, Oklahoma formed almost 10 years ago. The current lineup consists of Ryan Lindsey on guitar and vocals, Ben King on guitars, Penny Pitchlynn on bass and Nathan Price on drums. Their debut album Can’t Get Past the Lips originally came out in 2011 and was rereleased by Fairfax Recordings in 2013. Since then they’ve released three more albums and continue to impress fans.

CRAY, often mistaken as being an abbreviation for “crazy,” is an LA-based DJ, singer, and producer has been bringing color, class, and gammer sass to the scene since 2015. Her rise to EDM fame started when she was an opener on Anna Lunoe’s HyperHouse Tour in 2016. After that, it was nothing but packed stages and chickens flocking to her every show and festival set like HARD Summer, VooDoo and Electric Zoo. CRAY  went international in 2018. She kicked off a year of touring through Japan alongside Skrillex, followed by multiple festival appearances and went on to inject a little CRAYziness into China for her own tour.

French producer Quentin Dombres, aka Dombresky, has ha a great 2019. He’s proven track after track to be a master when it comes to experimenting among his native genre, house music. Diverse, yet concise pieces like “Soul Sacrifice,” “Futurmastic,” “Like That,” and “Utopia,” can all attest to the way Dombresky is able to manipulate house music into an irresistibly refreshing thing. The energy he instills into his productions is truly nothing short of jaw-dropping, dance-inducing bliss.

Josh Legg, known professionally as Goldroom, is an electro house DJ, but he isn’t afraid to break genre barriers. Goldroom has developed a unique style in his dance hits like “Till Sunrise” and “Silhouette”, but his latest EP takes this distinctive, sun-kissed sound a step further. Goldroom’s musical influences are Daft Punk, LCD Soundsystem, Nirvana, and Bob Dylan, and the Everybody’s Lonely EP follows in those artist’s footprints in regards to experimentation and musicality.

A balaclava-wearing producer of stern (if frequently humor-laced) bass house tracks, Malaa surfaced in 2015, unidentified, though an early press bio dropped a crumb by referring to him as Parisian. Fool’s Gold Records hosted the debut Malaa single, “Pregnant,” immediately after which Tchami’s Confession label became the supplier of roughly a dozen singles and EPs across 2016 and 2017. Among Malaa’s most popular releases during this period were “Notorious” and the Tchami collaboration “Prophecy,” while the artist also began to accumulate remix credits, highlighted by his commissioned work on Skrillex and Diplo’s Jack Ü track “Mind.”

Jennifer Lee, better known as TOKiMONSTA, has been firing off hit after hit since she began making music in 2008. She’s been breaking down barriers as a female DJ of color, and as an artist. In 2015, she was diagnosed with Moyamoya disease, which constricts arteries in your brain, making it difficult for her to comprehend everyday functions, such as language. Despite not being able to fully understand music at the time, she was still able to churn out her impeccable album Lune Rouge. Tokimonsta is arguably one of the most hardworking and stylized artists in the electronic game, and her tracks speak for themselves. 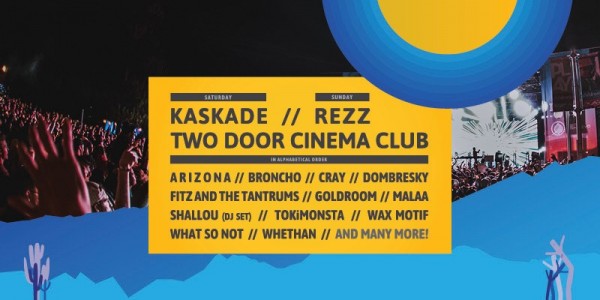 If you’re looking for a diverse, experiential festival Dusk Music Festival is for you. Witness world-class talent and indulge in the best local food and art Tucson has to offer. Find more info and grab your tickets here.