The Path of Totality Tour

Relentless Beats presented The Path of Totality Tour on Thursday, March 1, 2012 at Comerica Theatre in Phoenix, AZ. This show is All Ages.

The Path of Totality is an experimental album which finds Korn shifting gears and exploring new territory. That should hardly come as a shock to the band’s diehard fans, as Korn exploded onto the scene in the’90s and established themselves as hard rock game changers from that point on.

For The Path of Totality, the band collaborated with some of the leading dubstep and electronic producers in the world, including Skrillex, Excision, Datsik, Noisia, Kill the Noise, and 12th Planet. The result is something completely new, yet utterly and definitively Korn. Leave it to a band like Korn to continue to reinvent itself two decades deep into its career.

“The title The Path of Totality refers to the fact that in order to see the sun in a full solar eclipse, you must be in the exact right place in the exact right time,” Korn frontman Jonathan Davis explained. “That’s how this album came together. I think all the producers feel the same way. I’m not sure it could ever happen again.”

The band’s recent (and much lauded) collaboration with dubstep’s hottest producer, Skrillex, titled “Get Up!,” was the surprise rock hit of the summer, the buzz of which started in Coachella’s dance tent in April 2011, when Jonathan and Munky joined Skrillex on stage for a show stealing unannounced performance of the song.

That performance generated the start of a deafening buzz. The track has sold over 150,000 downloads, while the lyric video has generated nearly two million views and counting. The song was a top 10 rock radio hit.

Added James “Munky” Shaffer: “Get Up” started as a bit of an experiment, but we had such an amazing response from our fans and had such a great time collaborating that a full album of tracks came together in a couple of months. We couldn’t wait to get to the studio every day to finish the next song.”

Some of the song titles from The Path of Totality are: “Narcissistic Cannibal,” “Burn the Obedient,” “Illuminati,” “Kill Mercy Within” and “Chaos Lives In Everything.”

The album will be released in two configurations: as a standard 11-song CD and a special edition CD that will include bonus tracks as well as a DVD of The Encounter, a full-length video concert of Korn’s mind-blowing, once-in-a-lifetime performance in the middle of a 900-foot long crop circle in a wheat field in Bakersfield. The complete concert, previously seen last year on TV and online in an abbreviated form, will be offered in its entirety to those who purchase the deluxe version.

Additionally, today Korn announced that the first leg of their “Path of Totality (P.O.T.)” tour will play key ballrooms and feature dubstep DJ’s Datsik and Downlink, as well as young upstart Dutch Dub-rockers Dope D.O.D. Expect a groundbreaking experience unlike any other Korn tour. 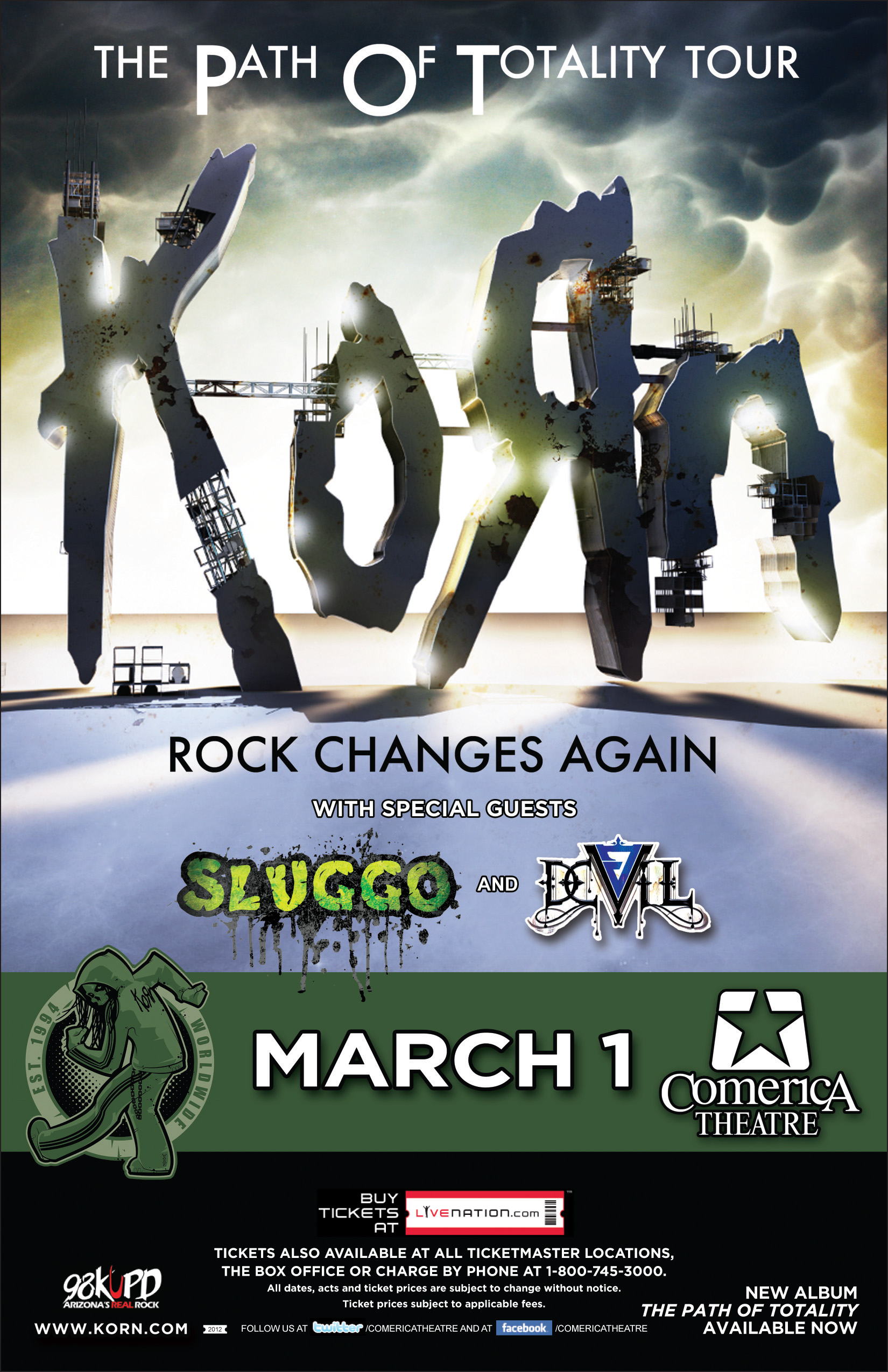