A lot has happened in the electro world in the last seven days. Here’s some of the highlights. 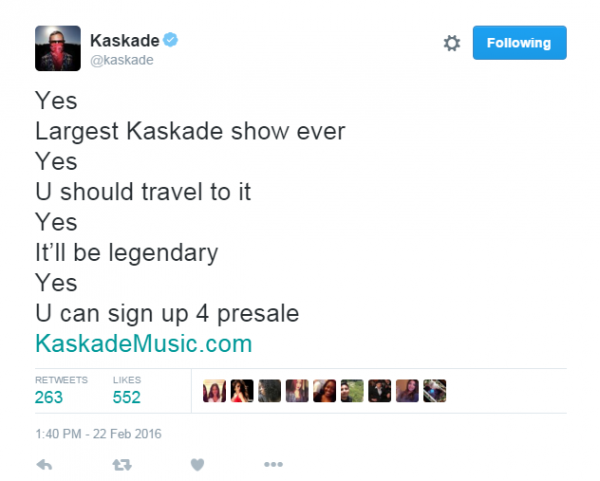 Kaskade made a huge announcement on Twitter: he’s performing SOLO at the Los Angeles Convention Center on May 7th. This is the biggest show Kaskade has ever played, and the the first electronic performance to grace this L.A. stage. Twitter was poppin’ while kaskaders searched the city looking for free tickets to the show. Check out the rest of the tweets and the chaos here.

Dillon, the jester of EDM, gave us a hint that something big is coming soon… is “all this new music” an album? A bunch of collabs? Oh, the anticipation. Dillon for sure makes us dance, and we can’t help but laugh at his scattered brained comments. Literally five minutes after tweeting about his new music, he makes a ridiculous (but valid) inquiry that sums up his personality perfectly.

Ugh, I love DJ friendships. It’s bizzare to think that in between their back-to-back shows and busy schedules, 3lau and Martin Garrix find time to just jam to music together. EDC Mexico was a trending Twitter topic this week, and Garrix gave a sneak preview of his newest collab with John Martin. Check out the video.

Holy moly. Posted to Sound Cloud three years ago, these four featured tracks certainly aren’t the familiar Safari sound we know and love, but that doesn’t mean we can’t still dig it. Bro Safari’s old identity, “Minus Music” is much more mellow and indie than his usual face-melting beats. Listen to baby Bro pre-safari here!