The Stööki Movement is Upon Us

Sound, Vision, and Play. These three words are the symbolization of the Stööki Movement. UK grounded duo Stööki Sound’s exhilriating live performances are the voice for their movement. Their mantra  is something they hold near to them. The Stööki Mövement is a spark in the eyes of artists and fans alike. The movement provokes ‘out of the box’ imagination and motivation to create whatever comes to mind, pushing boundaries like their synths and infectious lyrics do. Being pioneers in the electronic scene is not enough though, the duo are also carving their own path within Art, and Fashion. Stööki has a lot on their plate. And its only getting heavier. Last week the UK duo, have released a view of what they have been working on. Their new Record Label Ö.N.E Worldwide launched and is now on the map. Releasing on Ö.N.E, is their highly anticipated EP ‘ÖSIRIS’. And following their EP release, Stööki Sound’s ‘ÖSIRIS’ Tour. I can almost hear all the Stööki fans jumping off their couches.

Ö.N.E Worldwide. Ö.N.E standing for Originality Never Dies, Is the forefront of the Stööki movement. Stööki boasting a platform for artist to really express themselves. “We feel like a lot of new producers/artists are exposed to the money/branding side of music and are moving further away from creating what they love and what represents them. We want to help influence people to do what they believe in and strive to be unique,” Jelacee tells Billboard.  Holding a hand full of unique artist in their repertoire,  Stööki is ready to take on the game. As for the Ö.N.E. Worldwide’s first release, none other than the duo’s new track off their upcoming EP, ‘ENDZ’ Starting off deeply Stööki-ish, the track showcases there growth as artists. ‘ENDZ’ plays a mysterious synth sound, which grows into a vibrant array of tribal chords and thumping bass lines that take you right into the London backstreets. Tickling the fancies of their fans, this is just a sneak peak into their new ‘ÖSIRIS’ EP releasing within the upcoming months.

And to top this all off, in tandem with the news of the Stööki Sound’s ‘ÖSIRIS’ EP, they’ve released dates for their accompanying tour as well. If you’ve ever seen this duo perform (Trapfest 2016), you know as well as I do, this tour is going to be one for the books. Tantalizing energy, London based Grime/Hip-Hop, along side a live performance is just about everything a bass head needs in there life. Make sure to catch Stööki Sounds ‘ÖSIRIS’ Tour coming to Monarch Theater December 10th. 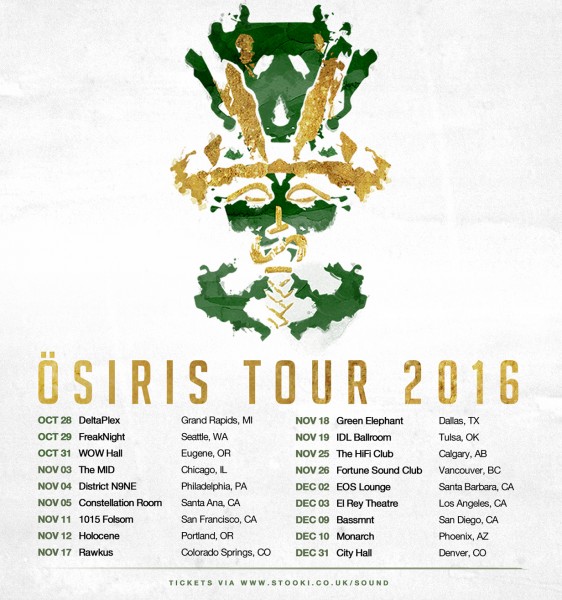