Re:Sound label boss, Michael Hooker is having a hot couple of months. He’s been filling our ears with minimal, banging techno and melodic house all summer. This past weekend the fifth installment of his six-part series took place. It was a night full of dancing under the stars. Blending seamless DJing and live editing – Michael’s sets are a unique display of his prowess behind the decks. He’s shared the stage with some of dance music’s biggest names including Lauren Lane and Bob Moses.

We had a chance to ask Michael a few questions about the Summer series, his upcoming album, the status of his Re:Sound label and his view of the growing Arizona scene.

What was your vision for the Re:Sound summer series parties?

I wanted to host several summer parties showcasing music from the label but it was important to me that the parties were at different locations. This meant that my music would be accessible to lots of different people and also that I could have a good variation of DJs but who all play the same style of music as I do. This way I’m reaching groups of people who perhaps wouldn’t have known about me or Re:Sound Music.

Have they met your expectations (or exceeded)?

They have definitely exceeded my expectations! For example, the last party at Melinda’s Alley sold out before the day via online tickets and people were actively trying to buy tickets from each other on the event page. The room was at capacity throughout the night and that is awesome!

I’ve met people who came to the first party but didn’t know much about the music that enjoyed themselves so much they came to all of the other parties. Even better, they are spreading the word so I’m really happy with the progress so far. 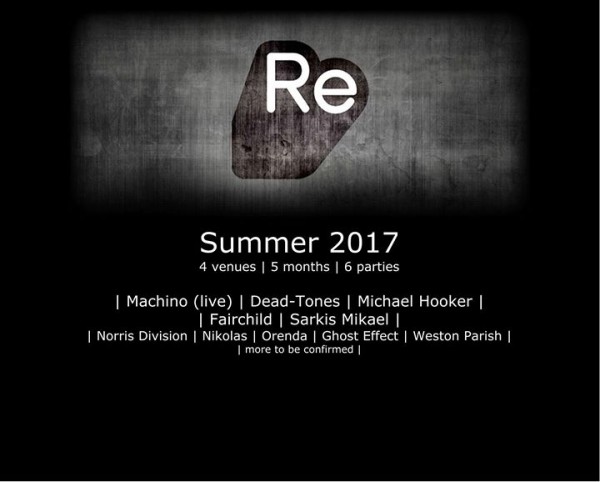 Any plans for future parties/events?

We have events planned up to the end of the year but we have only announced the summer parties so far. I want to carry on growing the label and exposing the music as much as I can…

Tell me about the Re:Sound Music label:

The label has grown a huge amount over the past two years thanks to all of the great producers we are working with. The label sound is very much a reflection of my musical tastes and we cover everything from deeper melodic house, through to some forms of techno, progressive house, and tech grooves. Due to this we have received support from DJs like Sasha, John Digweed, Lane 8, Lee Burridge, Cut Snake, Joris Voorn, Above & Beyond to name a few.

What about the upcoming Theo Schmitt album?

Theo contacted me last year with an 11 track album that he had created and engineered with Robert Babicz. I knew this would be a big project especially as we had never released a full album on the label before. I was honest with Theo from the start and told him that the level of work to promote it would be intense. Theo was more than happy with the challenge and twelve weeks ago we started promo to Magazines, Blogs, DJs and starting planning the remixes. We also worked with a PR company to get optimum exposure for the release.

I am very proud of the hard work that Theo and my team have put into making this release successful. Also, the amount we have learnt from undertaking such a project has also been extremely insightful.

‘The Game” is on general release on Monday 31st July from all major digital D/L sites and we currently have a preview of the entire album on our Soundcloud account.

What do you think of AZ’s dance music scene (coming from the UK)?

I’ve been here for just over 4 years and when I arrived it was pretty hard to play my style of music. Now is a different story and everything has grown so much. There are many more festivals, more International DJs and huge artists covering all styles that come and play here. Relentless Beats and other promoters like Stateside Presents are expanding every year and I’ve been lucky to play some awesome shows for both. It’s great to be part of the music scene here and especially now as it continues to thrive!

What are 3 tracks you’ve had on repeat recently (in your headphones, at parties, etc.)?

I am constantly looking for new music so it’s always changing but as of today these are my go-to tracks: Theo Schmitt – “The Game” (Lunar Plane remix), Christoph – “Feel,” and Eagles & Butterflies – “Arpeggiator.”