Highly-praised and well sought-after producer Isabelle Rezazadeh, known professionally as Rezz, is known by fans for her dark vibes, Space Mom persona, and her extremely charismatic and overall wholesome personality. In the past few years, her success has skyrocketed, with her name appearing alongside tons of prominent names in the industry and headlining shows that many only dream of playing. The 24-year-old Canadian DJ tweeted late last year, acknowledging her accomplishments, saying: 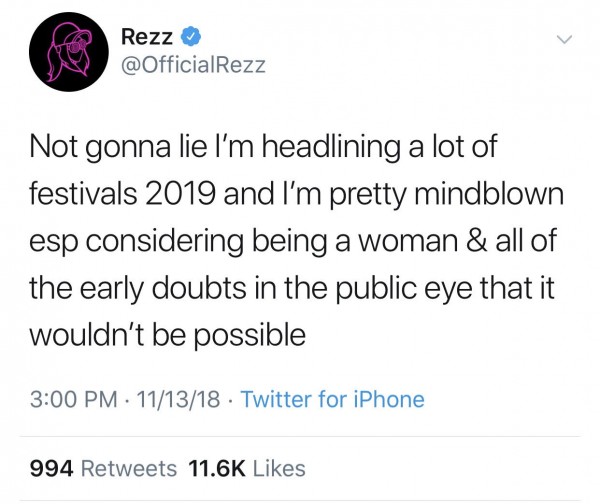 She recently announced an upcoming album, Beyond the Senses, which is set to release on July 24th of this year. From the album, she’s already released “Dark Age,” featuring haunt-like sounds, eerie plucking melodies, and other-worldly sensations. The drop is accompanied by deep and almost creepy basslines along with laser-like sound effects, that take the listener to a place truly beyond their senses.

It was no surprise this hot tune caught the attention of ESPN. “Dark Age” was used on ESPN promo advertising for game one of the 2019 NBA Finals.

The moment is finally here …

The track effortlessly guides the mood and background of the content being displayed. As the ad continues, the song becomes more apparent and adds a tense, challenging, and gritty tone to the video. Her music adds a sense of danger or uncertainty, and raises the stakes for the nerves of those watching, acting as a great accessory to the clips of players preparing, competing, and celebrating their sport. Watch the promo now:

Rezz continues to find success wherever she goes and puts her heart and soul into all of her incredibly hard work. If you haven’t yet had your soul ‘snatched’ by Space Mom, it’s never too late to experience her dark and hypnotizing tunes.