To celebrate Earth Day, Jauz and HALIENE take over Monstercat’s Twitch  on April 22  to showcase an acoustic performance of their most recently released track “Oceans & Galaxies”!  Succeeding the performance will be educational  interviews on sustainability, a live art stream and more musical guests.

Throughout the event and the month of  April,  Monstercat will expand fundraising opportunities for  ‘Beneath The Waves’  an ocean conservation foundation. ‘Beneath The Waves’  is a non-profit organization dedicated  to promoting ocean health, the protection of sharks and marine reserves. Limited- edition “Oceans & Galaxies” merch will be available for purchase and a portion of the proceeds will be  donated to charity. 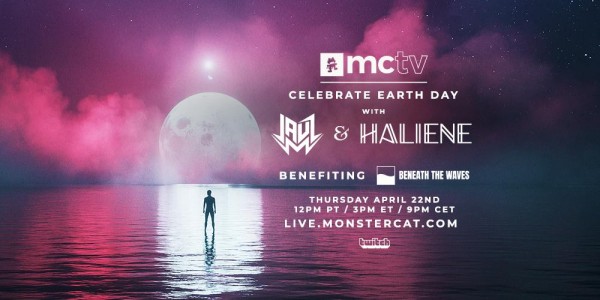 HALIENE grew up in Utah surrounded by national parks, which later inspired her to become an advocate for environmentalism and continues to push for the protection of our planet Earth. HALIENE has also performed a few quarantine live streams including Dreamstate and Dreamworld- She continues to stay active on Twitch by performing regularly. Jauz has also continued to stay busy throughout the year; expect to see Jauz at upcoming shows including Life Is Beautiful, EDC Orlando, and HARD Fest London.  Jauz has a series of projects he’s been working on such as a remix of Post Malone‘s Grammy-nominated-album single, “Hollywood’s Bleeding,” and   a rework of Steve Angello & Laidback Luke‘s classic, “Show Me Love.”

Make sure to follow Jauz and HALIENE social media to keep in touch and get notified of upcoming shows and music releases.