Relentless Beats, Big Room Group, and Prime Social Group are proud to present the Tiësto Club Life College Invasion Tour 2012 featuring the one and only Tiësto at Ava Amphitheater at Casino Del Sol in Tucson on Wednesday, December 5, 2012.

Tiesto’s Club Life College Invasion Tour is the largest dance music tour to hit American colleges. Last year the tour visited 18 college towns across the United States and opened the door for college focused tours from other leading DJs. The 2011 tour culminated with a record-breaking sold out performance at the 26,000 seat Home Depot Center in Los Angeles.

The 2012 tour aims to be even bigger, hitting more cities throughout the country including Syracuse, Columbus, Los Angeles–and yes–TUCSON! In addition to witnessing the biggest DJ in the world at their own college campus, fans will be able to interact with Tiësto in ways they’ve never been able to before. Several unique competitions will be held in each market giving college students the chance to be actively involved with the tour. More details to follow soon.

Tiësto has transcended musical genres to create a global “Tiësto” brand. His achievements include: a Grammy nomination, numerous MTV awards, performing at the opening ceremony of the 2004 Athens Olympic Games to an audience of billions, and even a wax statue at Madame Tussauds. With over 12 million friends on Facebook, 1+ million followers on Twitter, more than 300 million hits on YouTube, a globally syndicated Club Life Radio Show and his Club Life Podcast (#1 music podcast on iTunes globally), not to mention having played to millions live around the world, Tiësto has truly become a universal phenomenon.

Tiësto has worked with superstars such as Kanye West, Coldplay, Gotye, Katy Perry, Nelly Furtado, Yeah Yeah Yeahs, Goldfrapp and many more. 2012 has seen Tiësto achieve new heights in his stellar career – launching his very own Club Life Radio Channel on Sirius XM, releasing his AKG by Tiësto headphone range and iPhone app, along with his hugely successful Club Life – Volume Two Miami album. Headline performances at festivals around the world, residencies at Pacha in Ibiza and the Wynn in Las Vegas, as well as his upcoming Club Life College Invasion Tour in October, all promise to make this year Tiësto’s biggest yet.

Buy tickets and RSVP with the links above. Join our text list by filling out the form in the upper right of this page or  texting RBVIP to 545-454. 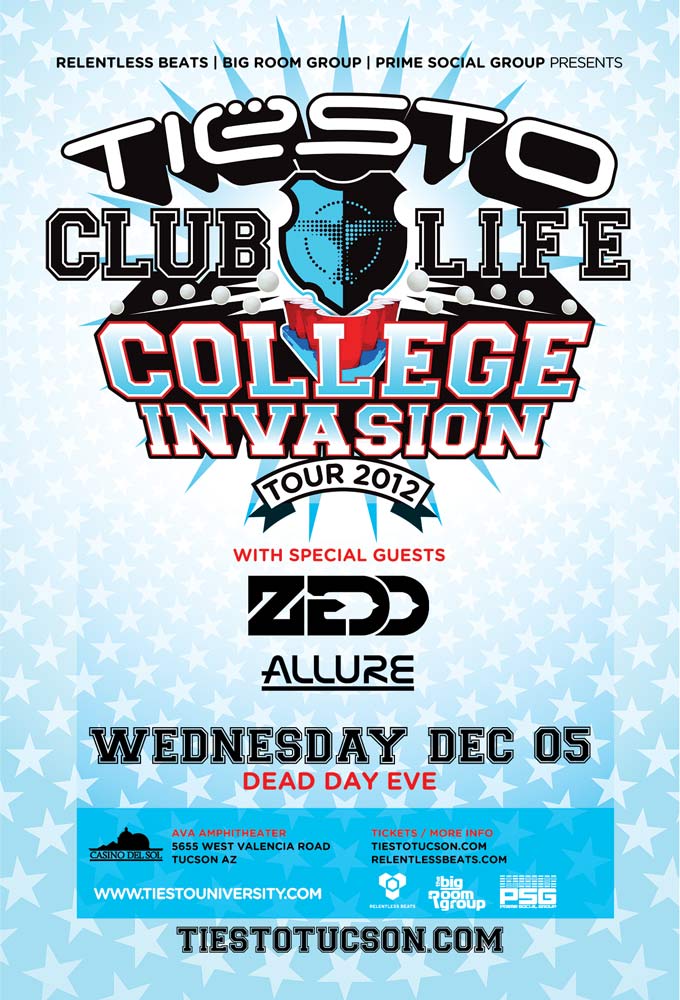