Over the weekend, Shaun Bacus, better known as Hekler, lit Bassrush Arizona up with a massive set. With just a little over a year under his belt, he’s already gained support from some of the biggest bassheads in the industry including NGHTMRE, Slander, and Whipped Cream, and has played shows all over the world. The Las Vegas-based DJ and producer doesn’t mess around when it comes to his music. His gnarly, energetic sound turned the Rawhide Warehouse into a headbangers paradise. With just a handful of singles and an EP released, Hekler has collectively received hundreds of thousands of streams on Spotify and Soundcloud. His track “404” has been thrown into sets all over the world because of its incredible face-melting bass drop. Just after getting off the stage at Bassrush, I sat down with Hekler and picked his brain on what makes his music his own. 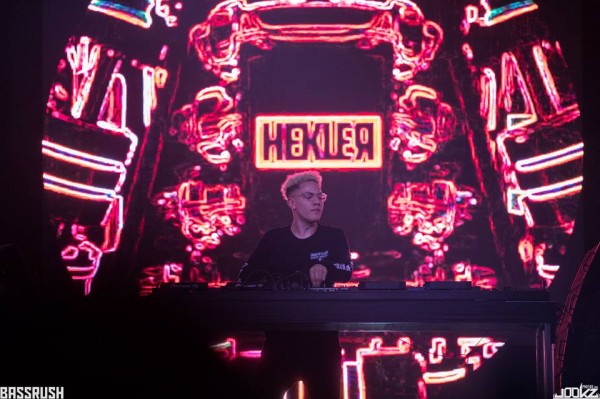 First off, thank you so much for taking the time to sit down and talk to me. How does it feel to be making your RB debut today? We’re stoked to have you!

It’s actually really dope because I would always hear about Relentless Beats and how amazing all their events do. So eeing the crowd out there by the end of the set it was packed. So Relentless Beats gets an A+ for sure.

What inspired you to start making energetic, heavy bass music?

Definitely Noisia. They’re heavy drum and bass, G Jones too, he’s also playing tonight. Bleep Bloop. I love the weird experimental stuff and I try to make it danceable or like you can headbang to it just so like you aren’t standing there.

You released your first hit “Ultimate” last year to much praise. How have things changed for you since that initial release?

So when I released “Ultimate” I had never played a show in my entire life and I reached out to DJs. It got support from artists like NGHTMRE and Slander, all these big dudes started reposting my stuff. Then I got booked for my first gig and from that point, I’ve played all over the entire world. I just got back from an Australian tour.  I’ve played in probably in every city in the states. It’s just like surreal that I took something that I wasn’t sure if I was going to be able to do as a career, but now I’m sitting here interviewing with you at Bassrush!

You dropped some new heat yesterday–just in time! Tell us a little bit about “Buggas.”

So Mastadon sent me a work in progress, he said to check this out because it was kind of my vibe. I listened to it, he did a kind of roughed-down version of the original song. I went in and I did build-ups, I redrummed it, I did some more sound design on it, then I did the super distorted second drop on it. I sent it back to him, and he didn’t really say anything about it besides “Damn I guess it’s done.” I debuted the song at Hard Summer at the beginning of August and we released it yesterday!

You’ve caught the attention of some big players in the bass community. Who would you love to work with in the future?

Back to the inspiration, Noisia, man. For me, those three dudes don’t get enough love. Like here in America, there’s not enough love for drum and bass. I love drum and bass and they have a special place in my heart.

What can listeners expect from Hekler in 2019?

A lot of bass, potential broken necks at shows, and me just keeping it real, to be honest. Like I’m not going to sugar coat a bunch of bullshit. I’m not going to be up there trying to put on some front. I’m going to go out there a 21-year-old kid with blonde ass hair and hope that you guys go as hard as me.

With just over a year under your belt, what are some career milestones your most looking forward to?

Really can’t wait for my own headline world tour. I’m about to go on a bus tour with Snails, we just announced that. I really cannot wait. Having Hekler on the side of the bus, I’ve dreamt about that since I was 8 years old.

Before I go, if you could only eat one type of French fry for the rest of your life which kind would it be?

Thanks again for sitting down with us. Any final words from Hekler for your Arizona fam?

Arizona Fam! What the heck Y’all were crazy! Be prepared when I come back!