This weekend, fellow Relentless Beats writer, Nicole Petriw, and I had the opportunity to cover HARD presents… HARD Summer where we had the pleasure of witnessing some mind-boggling sets, being surprised by amazing guest appearances, and meeting some of the industry’s biggest stars and up and comers. While there, we had the chance to sit down and speak with two of the three guys from Dirtyphonics, Pitchin and Charly, with which we discussed their first HARD Summer experience, where the metal influence of their music originated, collaborating with artists on their recently released Write Your Future EP, and their recent guest appearance at EDC Las Vegas. 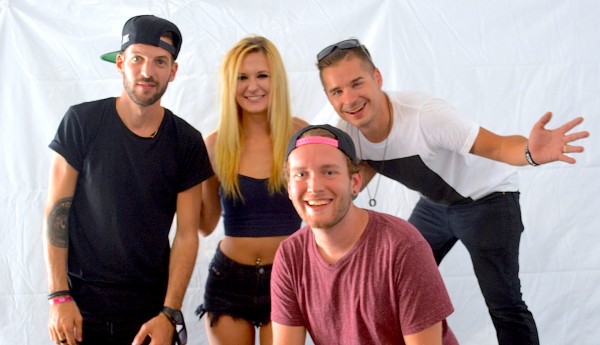 Dirtyphonics: That was an epic one. We actually started with like 5 minutes with no sound in the front. These guys jump on the table, like really interact and like play with the crowd and they were awesome. They were singing along and stuff like that with no music and I was trying to plug it in to keep it on. And after, it went well. That was the real beginning of the set.

(They proceed to show us a video on their phone of the entire crowd chanting along with them, no music at all.)

Dirtyphonics: I’m like, fuck, please plug something in. We didn’t even have the mic yet.

RB: At least you had those guys out there to keep it going.

Dirtyphonics: Yeah. There was really good vibes, fucking friendly. They get it, they’re like, fuck it, don’t care. And after it went good, man. We played a lot of different genres. We started out really strongly with drum and bass, they were down for it. Then we played pretty much all over the board after. So yeah, it was a short set, we played like 45 or 50 minutes, so it’s way too short. But, you know, everybody needs a set time.

RB: This is your guys’ first HARD Summer?

RB: And have you guys played any other HARD events at all?

Dirtyphonics: No, no I don’t think so.

RB: How is your first HARD event going?

Dirtyphonics: Good, yeah we haven’t had much time to explore yet. We had our set and some interviews, but after that we’re definitely going to check it out. 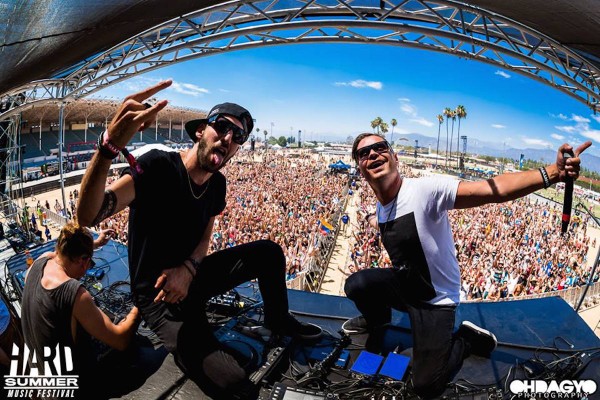 RB: Nice, who are you guys most excited to catch while you’re here?

RB: DJ Question Mark, whose that?

Dirtyphonics: [pause] I have no idea… 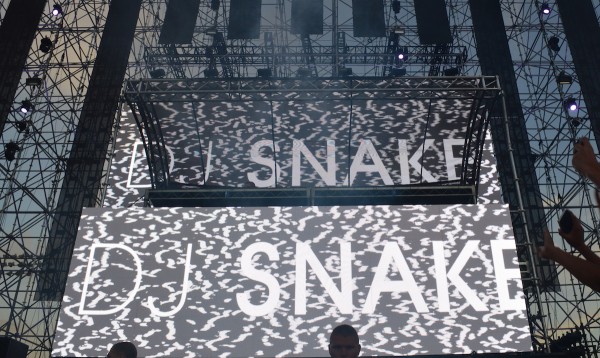 Dirtyphonics: But, we’re probably gonna be there. I wanna see Salva. Oh Milo and Otis too, Valentino.

RB: So with your guys’ music you have a lot of influence from heavy metal, where does that come from?

Dirtyphonics: We played in metal bands when we were kids. We had the long hair.

RB: What instruments did you play?

Dirtyphonics: One of us played guitar and the other played bass. Lots of energy, we’d mosh pit, fucking stage diving, stuff like that. Especially when you’re 14 and your voice isn’t ready yet, the guitar for sure. We started when we were like 12 or 13 years old. So yeah, no, it was fun, man. It’s still a part of us. Still listening to a lot of metal.

RB: What was the first show you went to where you were like “This is what I want to do”?

Dirtyphonics: I think my first was in like 1994 and it was Machinehead in Paris.

RB: You guys have your Write Your Future EP which came out a couple months ago and you collaborated with Trinidad Jame$ and UZ, we have UZ coming to one of our shows in Arizona. What was it like to collaborate with UZ and Trinidad Jame$?

Dirtyphonics: UZ is a homie, so that was way easy. It actually happened really fast, we traveled to LA, we were there in the studio and we were just fucking around. It was a late night session, kind of drunk, and we were kind of just making noises and we started something and at the end were kind of like ehhh that was pretty cool. We can do something with that. We took the track with us on the road, we were playing a show in Switzerland and after the show we went back to the hotel room, and we couldn’t get this melody out of our head. We were like, shit, lets lay it down. We were so drunk. Then we sent it back to the US, and that’s where Trinidad laid down his lyrics. So anyway, the song happened in three different countries. And Trinidad, dude, like, he’s the man. Like, he is fucking down to do anything. He did the first shot in 24 hours, like in 1 day. We called him and were like, “can you change this and this”, and the day after, done. And so many rappers are hard to work with, it’s usually a long process, but he was on top of it.

RB: You were previously based out of France and now you’re in LA, right?

RB: You have a third member of the group working in Paris. Is it difficult at all working together and touring separately?

Dirtyphonics: It’s better. You know why? We spend less time in the studio tweaking products for weeks.

RB: You get to travel the world.

Dirtyphonics: Yeah. We have a lot less time than we used to have working in the studio, so when we’re there, it’s got to fucking happen. Making those deadlines, we need that. We’ll do stuff on the road and send it over to him.

RB: You guys were the special guests this year at EDC Las Vegas, and you had your Anonymous masks riding up to the stage. How was that? How was it received?

Dirtyphonics: Yeah, the love we have on the track, that is huge. Like honestly, from the DJs, like the DJs even who don’t play drum and bass, they’re like, “Whoa, this is huge.” It’s a track that everyone can relate to, because the lyrics and the concept, its pretty relevant to all of us. So yeah, everyone can relate to it, then it drops into a heavy drum and bass track. It was fun to do something creative with the secret set too. When we started we had a big question mark on the stage, the masks obviously. It was a cool experience because we had to hide going on stage so we didn’t see the crowd. It was Sunday night, at 3:30 in the morning, we had no idea what to expect. We were hiding behind the table, we pressed play, then we stand up and I was like “holy shit”, it was packed! Wow! It was a really good feeling.

RB: Well, that’s all we’ve got for you guys. Thank you so much! I hope we see you guys in Arizona sometime soon!

Dirtyphonics: Yeah, definitely! Thank you too!

Hopefully we will see the Dirtyphonics guys out here in AZ sometime soon, until then, don’t miss their collaborator UZ at Foam Wonderland in October alongside Bingo Players and Kayzo!