Relentless Beats Miami 2016: Spotify and PROXiMiTY Team Up for Miami’s PROXiMiTY vs electroNow Show at The National Hotel

It can be a difficult task to stand out as one of the best parties during Miami Music Week with so much going on around you. However, it would seem that PROXiMiTY and Spotify have teamed up to use the power of both platforms to create something that stands out among other events with ease. 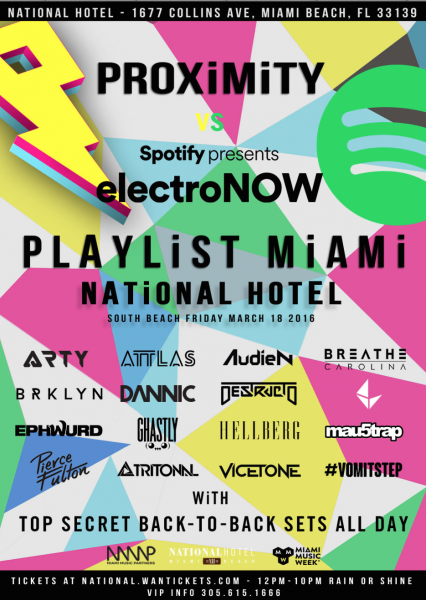 PROXiMiTY vs ElectroNow at The National Hotel is shaping up to be one of Miami’s highlights for the weekend with a lineup including hard-hitting bass artists like Ghastly, Ephwurd, #Vomitstep (Snails?), and Destructo; the uplifting sounds from Vicetone, Dannic, Pierce Fulton, Tritonal, and Hellberg; melody based artists like Breathe Carolina, BRKLYN, Audien, and Arty; and even appearances from coveted mau5trap artist Attlas who has been teased as being accompanied by a Special Gue5t who has since been confirmed as Deadmau5!! 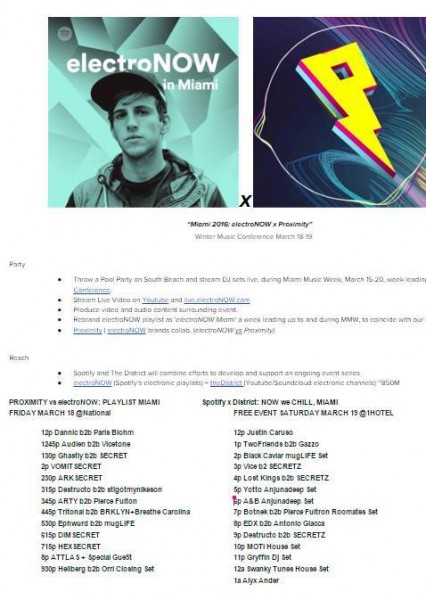 In addition to the already out-of-this-world lineup, the poster also teases very special B2B sets all day long. Based on an image posted by YourEDM, it would appear that these B2Bs consist of artists like Paris Blohm, stigotmynikeson, mugLIFE, and Orri, among other artists labeled VOMIT SECRET, ARK SECRET, DIM SECRET, and HEX SECRET. Everything is up to speculation at this point, but its only a matter of time until these secrets are unveiled.

Gey yourself over to National Hotel in Miami on Friday, March 18 at 12:00 pm for PROXiMiTY vs electroNOW!! Get your tickets here!