It looks like there’s all more the reason for all of us to be Vegas-bound this upcoming fall after the temperatures cool down. Running since 2013, the Life Is Beautiful Music and Art Festival, located in Downtown Las Vegas on September 23rd throughout the 25th, will be featuring some today’s biggest mainstream acts as well as surprises that will make your jimmies rustled like never before. With the lineup fresh off the cutting-room floor and finally released, we now have something to look forward to in AZ as the season changes pace. The Life Is Beautiful Music Festival wishes to reinforce the ideals of unity, diversity, and the union of humanity as a reason to not only showcase the local culture of Las Vegas (after all, it is an art AND music festival), but bring together a hodge-podge of only the greatest musicians to Downtown Las Vegas. With artists like Mumford and Sons, Major Lazer, Chromeo, Dirty Heads, Gramatik, Keys N Krates, G-EAZY, Die Antwoord, Snails, Jane’s Addiction, and many more commas to add to the list, even if you might not be vibing with our friends like Mumford or The Shins, there’s plenty of artists not only coming from the world of EDM, but also reinforcing the mantra of diversity through music. If you don’t believe us from the artists already named, check the full lineup below to get the full who’s who: 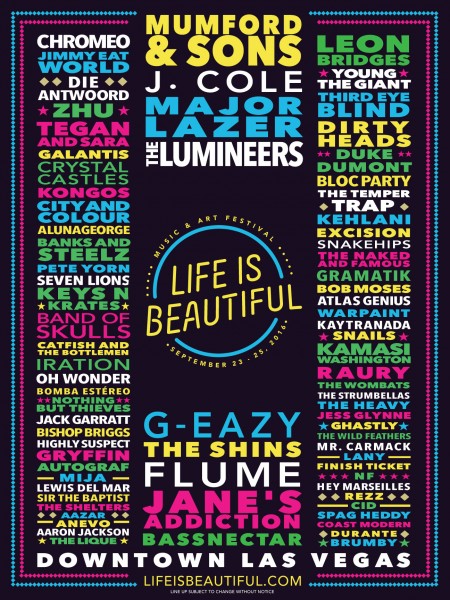 Although historically fresh, the Life Is Beautiful Art and Music fest is following in larger festival footsteps by bringing together not only artists of one genre, but by bringing individuals of all different backgrounds together for one goal: to blow the roof off of Downtown Las Vegas. The early-bird tickets may be sold out, but stay tuned to the box office and the website news to stay on top of ticket news so you won’t be your only friend not going to what is shaping up to me one of the closers of Summer, but the gateway to the fall.

With as many artists jampacked into one festival, don’t fret if you don’t get the chance to see them all – the beauty of a large festival is choosing your own adventure and making your own unique experience. The doors will be opening at 2 PM, and closing at 1 AM. Ticket information can be found through TicketFly as general admission, but if you don’t mind breaking the bank for a once-in-a-lifetime experience, the V.I.P. experience will be featuring a lounge area to rest your booty, vendors exclusive to your V.I.P. status on terms of food and drink, and express V.I.P. lanes at the entrance to the fest to make you feel like you’re at Disney Land. Let’s not forget the most sellable argument: “private air-conditioned flushable restrooms with attendants.” 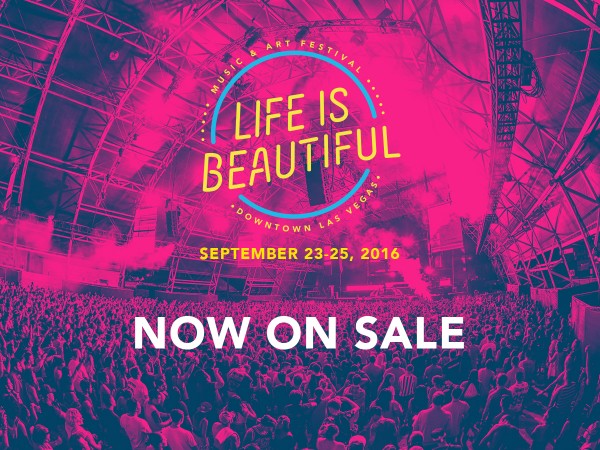 Check out the Life Is Beautiful Festival from September 23rd through the 25th in Downtown Las Vegas, and plan your day well, because you are definitely going to have to make some difficult choices on who to see. As for us at RB, we were sold on the V.I.P. flushable air-conditioned bathrooms.