Are you ready to get in the mood with Nicole Moudaber this week and weekend? The Nigeria-born DJ and producer is coming to Vegas with her remarkably dynamic sound and undeniably magnificent head of hair. With a strong showing throughout the week, including an appearance at EDMbiz, prime billing on EDC’s neonGARDEN stage, and a true dark dancefloor experience at Drai’s After Hours, Nicole Moudaber should be on your list of artists to catch at some point during this immaculate week in Las Vegas. 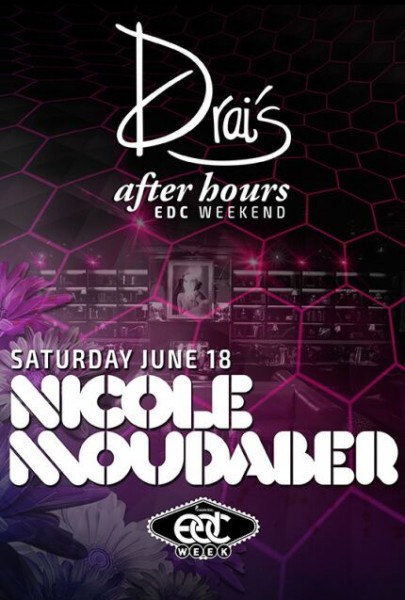 Kicking off the action today with her appearance at EDMbiz Conference and Expo, Moudaber will be featured as a speaker on the Beyond the Boys Club panel, a feature discussing the role of women in the industry and what is next for women in dance music. This panel will also feature speakers such as Liz Garard of Nap Girls, MacKenzie Reynolds of Capitol Music Group, Matthew Adell of MetaPop, Neda Azarfar of The Recording Academy, and Sarah Polonsky of DJ Mag.

As the lights get brighter and Las Vegas begins to fill with ravers and artists alike, Nicole Moudaber will flourish along with the electric daisies. On Saturday night at EDC’s neonGARDEN stage, Nicole will hop on the decks at 1:00 AM following Totally Enormous Extinct Dinosaurs B2B Jonas Rathsman. The neonGARDEN stage is the perfect home for Moudaber’s dark dancefloor vibes, and will serve as your vessel to get in the mood. Nicole is no stranger to EDC, even hosting her own Mood stage at least years edition of the festival. Prepare for her grab you by the throat with her uncensored and fierce musical domination.

But more so than EDC, Moudaber is familiar with the the sounds of the after hours. To prove it, this nightlife vixen has shared a number of releases including her In the MOOD podcasts and her uniquely haunting EP, Silent Sigh. Bringing her techno music with her to dance clubs from Los Angeles to New York City to London to Ibiza, Nicole Moudaber commands the floors long after the night has reached its peak. Following her set at neonGARDEN, make your way to Drai’s After Hours nightclub in the basement of The Cromwell for the true Nicole Moudaber experience.

Tickets to her Drai’s After Hours show can be purchased here!