After two successful years of BOO! on both sides of the country, we’re teaming up with Insomniac to bring this spooktastic event to Phoenix on October 15. Phoenix was granted the heaviest lineup on the tour. They must know we’ve become a bass oriented city. Come on down to Rawhide tomorrow and headbang your way into Halloween with Knife Party, Excision, Snails, Nghtmre, Ghastly, G Jones, and Wuki. 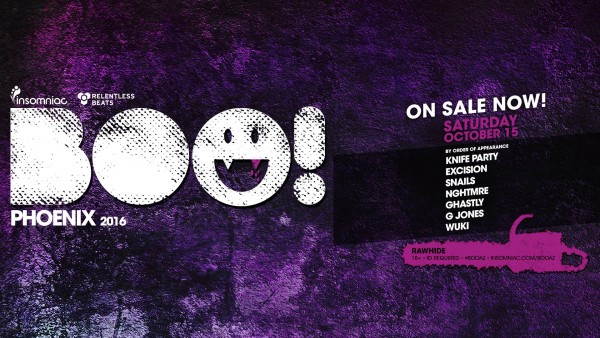 In 2014, BOO! had it’s debut in Brooklyn, New York. Artists included Knife Party, DJ Snake, Tchami, and more. Since then, it has expanded to multiple cities including Dallas, San Francisco, and Phoenix. We’re lucky to host such an event. The production will consist of some of the most frightening stage set up, props, and even people.

When it comes to the lineup, it speaks for itself. On October 15, Rawhide is where BOO meets BASS. Be prepared for some of the most mind throttling electronic music. Get a taste of what you’re in for with Excision’s Shambhala 2016 mix:

The best part about this is the excuse to dress up early. What will you be? A ghost or a clown? Perhaps you still haven’t gotten around to deciding, but do not waste any time, for the mysterious phenomenon starts this weekend. You will not want to miss it, considering it was pronounced one of the top 10 edm events for getting weird this Halloween by edm.com.

Purchase your tickets and join the event page.