As one of the longest-running electronic producers, DJ Icey has claimed himself king of the club scene. Getting his start in early Miami bass spots has granted DJ Icey a place at the top. He combines melodic elements with hard-hitting bass lines to provide dance floors around the nation with an excuse to get wild.

Good thing the temps around here have been low because DJ Icey will be sliding through the valley to keep things cool. Bootys will be shakin’ as this dude breaks down the beat, so come kick it old school with us at Gypsy this Friday.

With so many different shades and schemes of this guy there’s one for every taste. As a member of the Fool’s Gold Family, some of his close ties put together a vid for Four Color Zack to give a little insight on their mild humor towards each other. You’ll surely get a kick as Atrak, Flosstradamus, DJ Craze, and others run through Four Color Zack like water on a paint pallet.

Four Color Zack – The Meh, The Myth, The Legend

For those making their way out to Salt for his performance on Friday, don’t forget your wallet for there will be tacos and tequila waiting to be consumed. What better way to spend your Friday night? 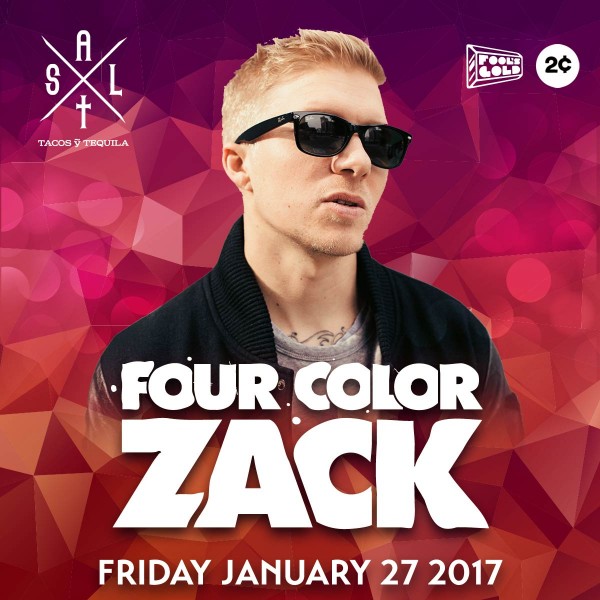 Master of the 808s, Ill.Gates, is known for his intricate approach when creating his own sound. It’s the kind of something you hear as you’re trying to crawl your way back to your campsite at 5am on day two of a long weekend event .. but you just cannot resist. So you make your way over and get down with all the other like-minded individuals that are on the same level.

Joining him is KJ Sawka, fellow bass invader. He’ll be claiming his seat alongside Ill on the space commission as they pound some sound into the walls of Monarch. As some of you may know, on the side KJ is the drummer of Destroid along with Excision and Downlink and of Pendulum, a drum and bass band. Without a doubt, Monarch is going to be up in arms this weekend, so come gather with your local headbangers on Saturday.