How Steve Aoki Utilizes His Platform for the Greater Good

If you have ever had the opportunity to attend an event thrown by Steve Aoki, then you would understand how intoxicating the energetic atmosphere truly is. Steve Aoki is a charismatic man who thoroughly relishes in the aspect of celebration. Aoki puts on some of the highest amounts of performances worldwide. Despite being buried with tour shows, he persistently maintains his vivacious escapade from one show to the next. Nonetheless, throughout the elongated road trips, sleepless nights, and heaps of tour shows…Aoki still finds time to exercise his platform in a way that benefits those that are less fortunate.

Steve Aoki had a bit of a challenge growing up due to his cultural upbringing. The reasoning was predominantly due to his mother who raised him alone and his father who frequently was out of the picture. He lived far from a lavish lifestyle, but he never lost sight of his long term goals of establishing his discography career. Aoki grew to become devoted in his creating a new beginning with his father (founder of Benihana’s). Unfortunately, as he finally began having the idealistic relationship he fantasized about as a young boy, his father grew terminally ill. The illness exacerbated a degenerative brain disease that eventually formulated into cancer. Aoki watched as cancer unruly restrained his father. He knew that he would not let such a debilitative disease define his father’s life, so he continued to persevere. Aoki systematized a charity organization that initiates raising fundamental awareness for brain research. The Aoki Foundation intends to not only press for persistent awareness, but its goal is to one day identify a cure for regressive brain diseases. Although Steve’s father passed away, he did not let his name get lost in vain. Steve, moving forward, continued to cultivate increased alertness on a subject matter that he intimately stood by for years to come. 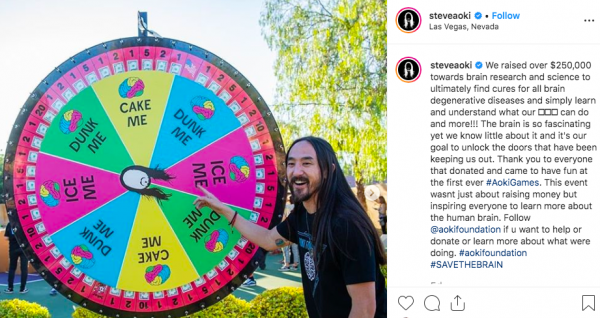 Aoki’s charitable organization was initiated back in 2012. After his father’s death, he felt compelled to continue using his podium to rejuvenate adversity that society faces. Being able to promote health awareness in a gratifying way furthered Aoki’s achievements in collecting donations for such an important cause. Recently, he launched a unique spin on a fundraiser event he called the “Aoki Olympic Games”. This effervescent event included a multitude of friendly sports and festivities that were all used to raise enlightenment on the root causes of brain cancer. Steve Aoki came out on his Instagram to unveil the amount of money that was donated throughout the event, this being a whopping $250,000. All proceeds will be going to fund cures for degenerative brain diseases and enhance its scientific studies. Steve Aoki is not only the life of the party, but he continues to breathe hope into the pitfalls of life itself. If you would like to gain more insight on the Aoki Foundation or find out when the next fundraiser will be, click here!