From February 3-5, 2017, Gem & Jam will be hosting their jaw-dropping lineup just north of Tucson at their new location of Pima Fairgrounds. Lotus, Eoto, G Jones, Diamond Saints, Jaw Gems, and even members of the String Cheese Incident will be joining us as Trancident for the weekend festivities. 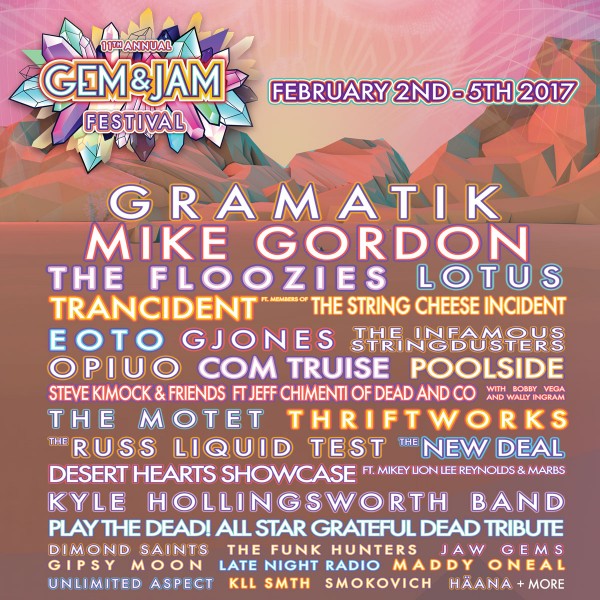 Catch Gramatik throw down the funk as they twist it back up, The Floozies break it down on this side of town, and watch Phish’s Mike Gordon play the face off of his bass. If you have a fondness for live music performances, Gem & Jam is what you’ve been waiting for. Headliners will come barging in with their keyboards, drum kits, guitars, and other instruments to deliver the funky fresh rhythms to good ole’ Tucson.

Mike Gordon
Bassist of Phish, Mike Gordon, was just announced as one of two main acts for the event. As one of the founding members of the band, Mike Gordon has been through all of the history of Phish. The band is known for being one of the most followed groups of all time… literally. Fans craze over them, attending their concerts and tours over and over again. Surely, Mike will bring his guitar and graceful vocals with him, so get a taste for Phish with his phenomenal performance. Plus, who knows. Maybe next time he’ll bring his mates with him.

Gramatik
Sharing the headliner spot is the well-rounded, electronic enthusiast Gramatik. Gramatik is known for his ability to smash up just about every genre of music into a set that gives one the most foolish of feelings. As a name that pops up on festival lineups of all kinds, Gramatik built his reputation of being able to cater to every crowd with no problem. Listen as he incorporates aspects of piano, guitar, and computerized sound in “You Don’t Understand.”

The Floozies
Bringing the absolute funkiest of the funk to Gem & Jam, The Floozies. These two gentlemen contribute a special feel to this year’s event. We’re in for a treat, for the Floozies break it down until the crowd gets on the ground. Incorporating snip its of hip hop tracks to section off their supernatural sound has pounded their name into lineups such as Electric Forest, Summer Camp Music Festival, North Coast, and Reaction New Year’s Eve, this year’s Gem & Jam. Hear it for yourself in, “Love, Sex, and Fancy Things.”

Lotus
It is an absolute mystery what kind of performance Lotus is going to bring to the table, and that’s what makes this group so unique. One could find them at an electronic-based event shredding their guitars, or bringing their dance heavy characteristics to a rock festival. No matter what it is, Lotus will be breaking down the boundaries with their ability to build genres up and make them their own.

What Did I Do Wrong

Supporting our headliners we have Gipsy Moon, Maddy ONeal, Poolside, Thriftworks, the Russ Liquid Test, and more. Workshops, live painters, and vendors will also join the musicians for a weekend of great tunes, art, and positive energy, but most importantly, the group of attendees will be the most diverse, artistic element of the event, so join us and purchase your tickets before they go up in price.