HARD Summer 2015 Will Be Bigger Than Ever

HARD Summer 2015 has officially SOLD-OUT of the festival’s two-day passes and will be the biggest HARD event to date! This year’s two-day festival will be happening at the Fairplex in Southern California on August 1st and 2nd. Founded in 2007, HARD Summer has grown over the years and is officially the biggest music festival in the Los Angeles area. According to August Brown of the Los Angeles Times, “This year’s festival has expanded to a mammoth 65,000 fans per day at the Fairplex in Pomona, for a two-day total of 130,000 over the two-day event… that’s enough to establish HARD Summer as not just a heavyweight in L.A. electronic music but as a national-scale force to be reckoned with in global dance music.”

HARD’s Boys Noize Appreciation Week began this past Monday (July 6th) and has had some very exciting releases come with it. We are celebrating the German electronic producer and DJ Boys Noize’s 10-year anniversary of the launch of his label, Boysnoize Records (BNR). Part of the weeklong celebration, a Boys Noize ‘HARD Summer’ Mixtape has been released with 30 different tracks and remixes to get you ready for August 1st and 2nd. This mixtape was created especially for HARD by Boys Noize himself. 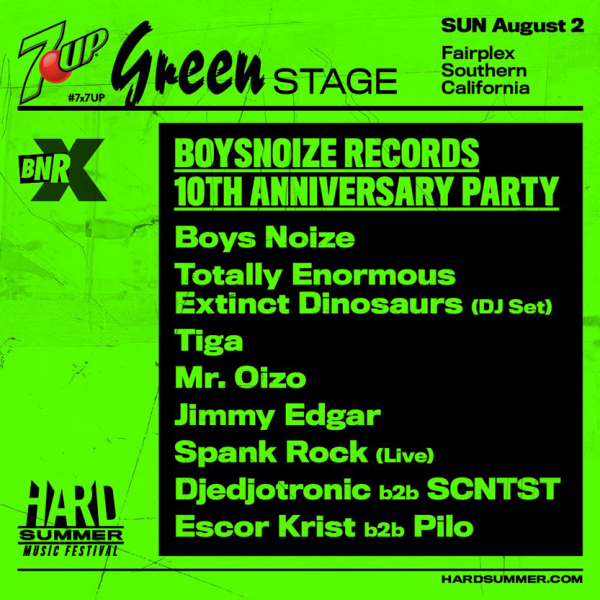 In addition, HARD announced this week that on day two of the festival (August 2nd), 7-Up’s GREEN Stage will be turned into the Boysnoize Records 10th Anniversary Party. This stage will have fan favorite moments featured on instagram as well as a talented lineup including: Boys Noize, Totally Enormous Extinct Dinosaurs (DJ set), Tiga, Mr. Oizo, Jimmy Edgar and Spank Rock (Live), with B2B sets from Djedjotronic & SCNTST as well as Escor Krist & Pilo. For HARD Summer’s full lineup, go to www.hardsummer.com