The Latest and Greatest of Dillon Francis

If you ask me the cliché icebreaker “Which celebrity would you want to have dinner with?” I’ll answer in a heartbeat. Dillon freaking Francis.

The court jester of EDM continues to add his unforgettable edge to already-addicting dance music scene. Dillon Francis has proven to not only be an outstanding DJ, but to be a comedian and entertainer in more ways than one. Also, he’s pretty sexy too, but that’s beside the point.

If you’re unfamiliar with Dillon Francis’ humor, let me give you a run-down of what you’re signing up for when following this clown on social media. Let’s just say you’ll be far from bored at 3am if you stalk his Instagram and Twitter.

From telling us about the time he snuck into Coachella or making a fool out of himself in the Hard Summer trailer, Dillon has no shame. The spoon-enthusiast seems as though he strives to make people laugh and be uncomfortable, and I’m all about it.

Let’s take his recent music video for “Not Butter.” I can’t lie, the video definitely sparked a bit of discomfort, but it was one of those wildly entertaining can’t-look-away-but-maybe-I-should moments. Dillon’s hilarious captions stitch the video together and make it one that stands above the rest. Check out the sick ideas this guy has and admire his unconventional humor.

Ok. That was a little weird, right? Still not convinced Dillon Francis beats to his own drummer? Get this- he spent the entirety of his stay at EDC Las Vegas two weeks ago Snap-chatting a pickle (you read it right) in various scenarios around Sin City. Catch some screen-shotted snaps here – laughter awaits.

One thing I admire about Dillon Francis is how outspoken he is. He isn’t just a DJ who maintains the tranquil, mysterious omniscient vibe- he is an absolute psycho with a strong personality. I mean, look at how clever he captioned this picture. And that face, ugh. Just imagine what is going through his mind while composing a tweet. Things like this cause obsessions. 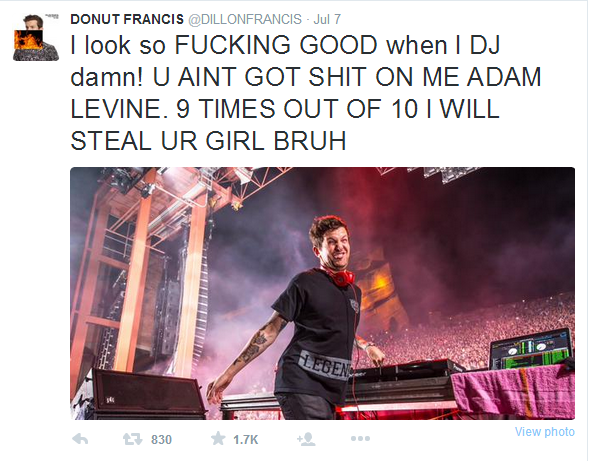 Let’s not forget his website that surprises you with chuckles behind every click. When visiting his website merch section, be sure to check out the “awesome shit” tab. Yep, Dillon has an entire section of his website dedicated to outrageous and bizarre bids to his fans. This features the opportunity for Francis to sing “happy birthday” to you in his underwear for a mere $3,000, and to force Dillon to join the army for $20,000,000. Click here to check out all the insane things you’ll never be able to pay Dillon Francis to do.

Dillon Francis is a loose cannon and we’re loving every second of it. His humor raises him above the rest as the most adored DJ without question. He’s an actor, a comedian and a DJ- and a successful one at that. The dance music master is responsible for single after successful single that make people obsessed with him before they even see his comedic side.

He’s been all over (so has that pickle) the country performing at EDC Las Vegas, Hard Summer, Lollapalooza, and the recently announced Holy Ship! Just to name a few. Dillon Francis’ famous hijinks will continue to rule the EDM world and win our hearts embarrassing video after embarrassing video.

If your answer to the question, “What celebrity would you want to have dinner with?” isn’t Dillon Francis, then you’re probably not one for humor and good music. #Dillon4President