The Glitch Mob returned to their hometown in Los Angeles to play a brand new live show at HARD Summer 2015. The trio consisting of edIT (Edward Ma), Boreta (Justin Boreta) and Ooah (Josh Mayer) used a combination of their custom stage musical apparatus called “The Blade,” live instruments including a Lemur Input Device and a large drum, as well as electronic backgrounds to captivate their fans. 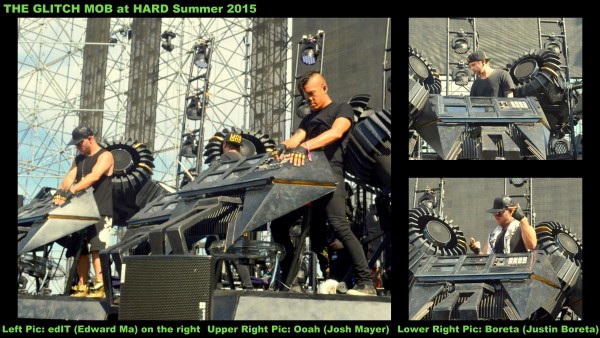 They entered the stage wearing black shirts, jeans, as well as ski masks covering their faces for a more dramatic effect that they soon took off for the remainder of their set. Never conforming to a certain style or genre of music while playing a great amount of their original material, The Glitch Mob had an extra special set, telling the audience they “loved them” as they surely could feel the energy radiating from the crowd. Bringing something truly unique to HARD Summer and going beyond pressing play, The Glitch Mob brought the drama of a live rock band to an electronic show that had the audience, sweating, head-banging and loving the combination of both genres’ elements.

Prior to their 4:10 set on the HARD Stage, I had the opportunity to sit down with The Glitch Mob: Ed, Justin and Josh for an exclusive interview in their artist trailer.

Nicole Petriw: “What can you tell us about your brand new live show that you guys are about to do?”

The Glitch Mob: “It’s called ‘The Blade’ and it’s a live show experience. It’s a whole stage instrument. It’s like a sculpture that also plays music and it’s this big custom thing that allows us to play all of our music the way that we want to and get crazy with drums and all sorts of fun stuff.” – Justin of The Glitch Mob

Nicole: “Your new song ‘Lords of Summer’ the Metallica Remix – why did you choose Metallica? What was your inspiration from when you guys were little; for example, what bands did you guys grow up listening to? Was Metallica a big part of why you guys started playing your electronic rock style of music?”

GM: “Yeah, I grew up listening to Metallica. There seems like there were two kinds of people if you’re into metal; you’re either into Guns n Roses or Metallica. I was a Metallica person – a big BIG fan. But they came to us to do the remix so that was a big honor to get to collaborate with them on. The other day, we were just listening to “Unjustice For All,” which is one of the craziest records of all time. It was an honor to get to collaborate with them.” – Justin of The Glitch Mob

Nicole: “If you could collaborate with anyone else besides Metallica, who would be ‘the dream’ if they came to you and said will you work with me on a song?”

GM: “There’s this guy on Instagram named “Just Rain.” He’s this guy from Toronto. He has this amazing classical Indian singing voice and he does covers of rap songs and its like its awesome. You should check it out.” – Justin of The Glitch Mob

GM: “It’s just been a lot of shows, and we released an EP a couple months ago and are just going to finish off the year doing some festivals and a couple other things. Then we’re going to hit the refresh button in 2016 and just get creative. Not really sure even exactly what that means, but usually part of the whole process with us is to try new things and explore new ideas.” – Josh of The Glitch Mob

Nicole: “Is playing a HARD Event extra special for you since you were originally from Los Angeles?”

GM: “Yeah, totally. You know we played HARD Red Rocks a couple nights ago, and this is our first time playing any HARD Events and it’s a true honor. They always have like really dope, really well curated lineups. You can definitely tell that Destructo really cares about the music that he’s booking. He takes chances and books a lot of stuff that he likes as well too. It’s not just kind of like who is hot right now. So yeah, it’s a really cool thing to be apart of. We’re really honored.” – Ed of The Glitch Mob

Nicole: “Who are you most excited to catch while you’re here?”

GM: “I’m really excited to see The Chemical Brothers. Yeah, I’ve never seen them play live before, but I’m a really, really big fan of the music so that’ll be great.” – Justin of The Glitch Mob

Nicole: “What was co-headlining the two shows with Chromeo like?”

GM: “Yeah that was special. I mean we’ve been fans of Chromeo for a long, long time and we’ve always admired their live show. And the energy they put out on the stage. And their production and all kinds of things. So when we got asked to do that it was, you know, it was a big moment for us.”– Josh of The Glitch Mob

Nicole: “You guys had said in reference to your sophomore album from 2014 Love Death Immortality that the number “3 is a big thing for us. It’s our theme.” How did that come along for you guys, is it just because it is the 3 of you now or is that a rebranding thing for you?”

GM: “Uhm, actually like we had different incarnations and all though the name was there in the beginning, it was more of like a ‘crew.’ It was just the name that we had. There was other people involved, it was more of like a ‘squad’ name. Then at some point, us three decided to start creating original music and so that’s really The Glitch Mob that we know today. Even though the name was around before, the start of the whole thing was really the three of us.” – Justin of The Glitch Mob

Nicole: “What was your inspiration for wanting to branch off at that point and create your own original music?”

GM: “I think we all just have stories that we want to tell. Or I guess the story that we believe the collective Glitch Mob: all the people out there that create The Glitch Mob experience is trying to tell, and we’re merely trying to just channel that, and ‘put it on blast’ so to speak. So I think that was it. Yeah, there really is something amazing about just DJing other people’s music, but there’s also something really special about truly trying to say something original from your heart.” – Ed of The Glitch Mob

Nicole: “Do you guys have any big goals on your bucket list for the future, something that you haven’t achieved already?”

GM: “We’re just kind of living the dream already. You know, it’s the journey, not the destination. So we’re just super grateful and honored to be here on this ride, right now. So I guess you could say like, right here right now, we are living the bucket list every single day.” – Ed of The Glitch Mob

For the remainder of their tour, The Glitch Mob will be hitting:

Connect with The Glitch Mob here: