The French Dark Techno mastermind, Gesaffelstein, has been teasing us all for a number of months with a mysterious countdown on his website. He had us asking ourselves many questions. Could it be a new tour? Could it be a new song? Could it be a new album? Well the answer did come in the form of a new album, but not the kind of album we might have expected. When the counter was up, it was revealed that Gesaffelstein would be scoring a new thriller film entitled Maryland, with his own all-new original material.

Just recently, Gesaffelstein posted the first track from the upcoming album onto his soundcloud page, “A Pledge”. The track is a very haunting display of an off-kilter melody that evokes a sense of unease. Just like most of the Frenchman’s music, you don’t quite know whether to enjoy his music or to be afraid of it. The track starts slow and and easily builds in intensity. However, he never provides listeners with a solid and recognizable bassline, but rather an arpeggiated analog synth bass, which only adds to the curiosity of the piece. The composition possesses a driving force that will compliment any thriller film to a tee.

This particular track is featured on the C-side of the four-sided vinyl that you can pre-order now. Also, the album will be available in extremely limited edition vinyl – 1,000 records – which can be purchased here. If a vinyl doesn’t sound up your alley, you can pre-order the album via iTunes here, or simply wait to listen to it on all of the streaming services out there. In addition to composing original music for the album, Gesaffelstein has used 3 of the tracks from his seasoned catalog of music in the film including the brutal track, “Ultra Violence”. 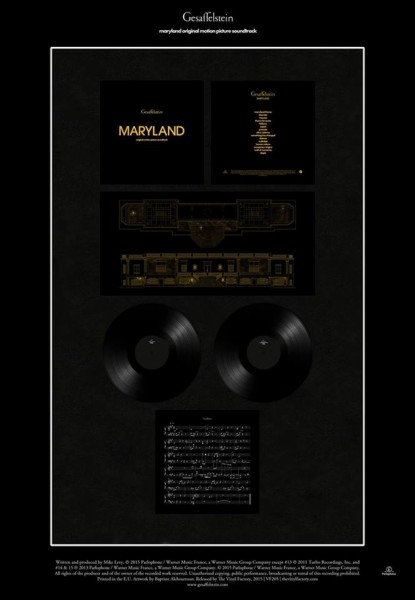 An official selection of the prestigious Cannes Film Festival, Maryland, or Disorder as it is sometimes referenced, is a French film starring Matthias Schoenaerts, a Belgian actor known for his work in many French films, and Diane Kruger, a German actress known for roles in Inglourious Basterds and the FX show The Bridge. The film follows Vincent, an ex-soldier struggling with post-traumatic stress disorder, as he protects the wife of a wealthy business man in the family’s villa, Maryland, in France.

Although there is still some time between when we can see the film and when we can hear the soundtrack, based off of this trailer and this track, I believe that audiences are in for quite the treat. The film will release at some point this month in France and has been confirmed to be released in the US as well, but no solid date has been announced. With the soundtrack set to drop on September 24th, be on the lookout for more pieces of the album to appear on Gesaffelstein’s soundcloud page in the coming week. In the meantime, purchase your tickets to Global Dance Festival AZ where you can invite Gesaffelstein’s dark techno to wash over you in person.