After a breathtaking year for the young North Carolina based producer, coming off of stellar live performances at Ultra Miami, Coachella, and HARD Summer, Porter Robinson has just announced a complete overhaul of last years stunning Worlds album with his Worlds Remixed LP featuring artists like Mat Zo, Odesza, and Chrome Sparks, among others. The Seattle based Odesza tackles the remix of Worlds‘ opening track, “Divinity”, while Chrome Sparks takes on the closer, “Goodbye to a World”.

As for the ever vocal, yet ever talented Mat Zo, the British producer takes a stab at the transcending track, “Flicker”. In an interview with Billboard Magazine Porter discusses his recently announced album. When asked which remix was his favorite, Robinson stated, “There are a lot of special moments on this remix album, I think my favorite remains the Mat Zo one. It’s someone I’ve collaborated with in the past. To get him on remix duty — to me, that’s heavy-duty.”

In addition, this is not the first we’ve heard of the remix album, having been touted for a number of months, but no official word coming until now. When asked about the delays regarding the album, Porter added that “One of the remixers dropped out, but we have a replacement and it’s actually someone who I’m really excited about. I think it’s great to put the album in front of people again and remind people about some of these songs and to get to showcase a bunch of artists who I’m enthusiastic about.” The collaborative nature behind remix albums is also something that gets Robinson enthusiastic, “I just like associating myself with things I think are good and to be able to take a list of my favorite musicians and say, ‘Hey, do something that is slightly collaborative,’ that is so great.” 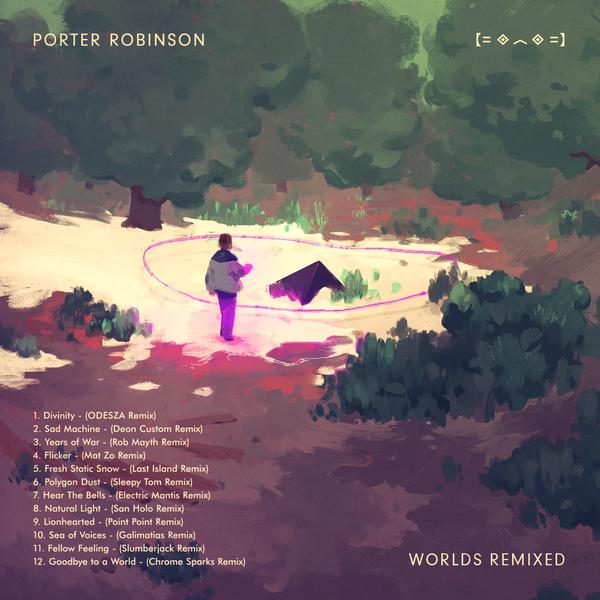 
Worlds Remixed, featuring all 12 tracks from the original album on the mix, is set to drop on October 2. Before then, you can catch Porter at Life is Beautiful in Las Vegas and at TomorrowWorld in Chattahoochee Hills, GA for his closing set which will feature a special gift from Mother Nature herself, the perfect spectacle to compliment such a ethereal performance.

Check out a spotlight on the producer and his unrivaled live performance here.